Biden Student Debt Give-Away Benefits Most Well Off and Losers 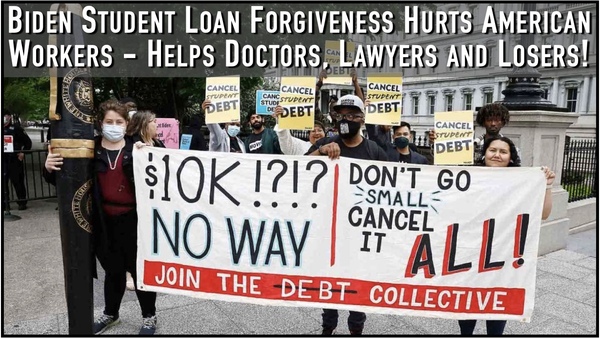 Biden Student Loan Forgiveness Plan is a Big Loser for Democrats Heading into Election as Leftist Prove Once Again that they are Out of Touch with Reality and Don't Give a Damn about Regular Americans!

The vast majority of student loans are racked up by people in elite professions like medicine and law, who spend years in school before being rewarded with high-paying jobs, a Daily Wire analysis of Department of Education data shows.

A smaller component is billions of dollars in loans to people with less-marketable degrees who incur debt that amounts to a bad investment (such as $100 million a year in loans for gender and ethnic studies), leaving them with salaries that are unable to pay for the loans. The data suggests that President Joe Biden’s plan to forgive student loans amounts to a subsidy primarily to doctors and lawyers, and secondarily to people who acquired knowledge and skills that are not in demand.

“The bottom line is that this move is a massive debt transfer from those who took out student loans onto those who chose not to or could not attend college,” Lindsey Burke, director of the Heritage Foundation’s Center for Education Policy, told The Daily Wire.

Biden has said he will cancel up to $20,000 in student debt for those who had received Pell Grants and as much as $10,000 for borrowers who make under $125,000 per year, or $250,000 for married couples. This would include many doctors, who often spend their early career as low-paid residents on the way to earning big bucks.

Health professionals vastly dominated the direct federal loans disbursed last school year, at $27 billion. At $17,000 per person in loans compared to $10,000 for most other fields, that degree is expensive, but positions the graduate to enter a robust job market.

Next is biology, whose prospects for lucrative employment are similar to doctors. Then there is visual and performing arts, the largest group of students that may have a hard time making their degree pay, at nearly $3 billion.

All other fields combined amount to fewer student loan dollars than medical professionals. Those fields include a litany of specious degrees, such as:

$100 million a year for ethnic and gender studies;
$1.3 billion for parks, recreation, leisure, fitness, and kinesiology; and
$1.6 billion for communication and journalism, and $340 million for sociology.

The dollar figures understate the aid because they only include direct federal loans, not Pell grants or private loans. They also only cover a single school year, so they will likely take similarly-sized loans for several years.

In a recent year, the University of California-Los Angeles awarded 255 degrees in ethnic or gender studies. They graduated with an average of $40,000 in student loan debt, and earned about $26,000 the year after graduating.

At Winston-Salem State University, graduates of the communication and media studies major had some $30,000 in debt, and earned less than $19,000 in their first year out of school. Twenty to thirty-nine percent were in default on their loans three years later, according to federal data.

Click Here to learn what YOU CAN DO to Win the November Elections!

Meanwhile, one of the nation’s largest law schools, Georgetown University, granted 651 law degrees, graduating with more than $160,000 in debt. But they earned $166,000 in their very first year out of school — enough to pay it off entirely (over a very short period of time.)

Lawyers could still qualify for $10,000 in debt forgiveness if they are married with a household income of less than $250,000, and some single lawyers newly out of law schools less prestigious than Georgetown would still fall under the $125,000 cap, even if they have a long and lucrative career ahead of them.

Burke said the Biden administration’s repeated “pausing” of all student loan payments under the guise of coronavirus has already benefited such people, whether or not they qualify for the $10,000 forgiveness. “An analysis by the Committee for a Responsible Federal Budget found that those holding medical degrees have already received $48,500 in benefit and those with law degrees have received $29,500 on average as a result of interest not accruing on their loans since March, 2020,” she said.


Click Here to Read More News at the Daily Wire.com