This is What YOU Can Do to Win the November Elections!

Please Watch the Video Above


Akron, OH:  The We the People Convention, announced today that it’s national membership, which includes the majority of the TEA Party/Liberty Groups in Ohio, will be joining forces with the National Rifle Association Institute for Legislative Action (NRA-ILA) once again in an effort to elect conservative candidates in the November 8, 2022 General Elections across the nation. This will be the third time that the two organizations have worked together with great success after doing so in 2016 and 2020.

“We are pleased to once again align our efforts in the critical 2022 general elections with the NRA-ILA because so many of our members are also NRA members and gun owners,” said Tom Zawistowski, President of the We the People Convention. “Our members in Ohio worked with the NRA-ILA in 2016 and 2020 with great success to elect conservative candidates, including two huge victories for President Trump in Ohio, and now we are expanding our efforts to include our tens of thousands of members in all 50 states. Our members will send text messages, make phone calls and knock on doors through the NRA-ILA’s Political Victory Fund,” Zawistowski explained.

“This decision to align with the NRA-ILA was made for two important reasons. First, we needed to align with an organization that we could trust and that would respect the value of the volunteer efforts we bring to the elections. Past experience has proven that the NRA is a trustworthy partner who respects our volunteers as true partners. Second, we know from past experience that working with the NRA-ILA we will not be contacting only registered Republican voters, but will be reaching out to registered democrats, independents and libertarians who share our conservative values.” said Zawistowski.

“That has been a key to our success in past efforts and will be even more important to our success this year as polling shows that their is a huge shift among all demographics from the left to the right, from liberal to conservative, due to the abject failure of the Socialist and Facist policies implemented by the Radical and Woke Democrat Hard Left Political Activist running the Biden Regime and many of our states. The American people have seen enough soaring inflation, soaring crime rates, increased energy costs, record drug deaths, out of control food cost and even food shortages. They want change and they will get that change if they vote for the conservative candidates in the November 8th elections whom we are supportring. This year’s WTPC - NRA-ILA combined effort will bring significanty increased grassroots resources to bear on the elections in Ohio and in states across the nation.” Zawistowski explained.

“Any individuals or groups who wish to join our efforts can do so from anywhere in the nation. Simply go to our website at www.WethePeopleConvention.org for information on how to sign-up to receive training and instructions. You will also see a video of We the People President Tom Zawistowski explaining the history of the organizations relationship with the NRA-ILA as well and why YOU should join the effort.
##

TO JOIN OUR LIBERTY ARMY:

With the Message:
P2P for Sending Text Messages from ANYWHERE
OR
D2D and your two Digit State (D2D AZ for Example)
If you will Knock on Doors in the Cities listed below! 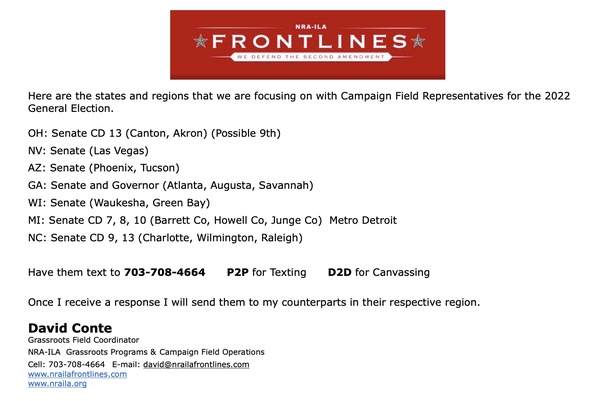 
Source: We the People Convention
WTPC JOINS NRA-ILA by Tom Zawistowski is licensed under N/A N/A