Now you can send a letter of encouragement to the Political Prisoners! 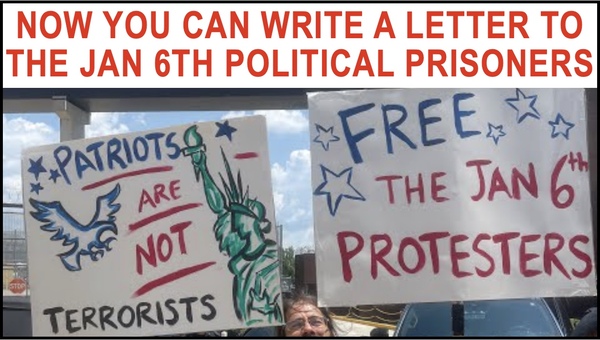 Click Here to Send them a Letter of Encouragment!

POLL: HALF of Americans Agree that the Jan 6th Detainees are "Political Prisoners"!

The Peaceful Protests (Outside the DC Jail) the Media is NOT Reporting!

Did you know that an extension of the January 6th protest has been happening all across the country? I had no idea. But starting last weekend, patriotic groups in 10 US cities across the country held protests in support of the political prisoners who are being tortured by the Biden regime.

One of the protests happened directly outside the disgusting DC jail where Trump supporters are being held in solitary confinement. The prisoners could hear the protesters outside as they sang the National Anthem, “God Bless America,” and loudly chanted, “Let them go!” Awareness of the horrific treatment of these Americans for the crime of having unapproved political opinions is finally starting to spread.

Only a handful of us on the political right have been decrying this illegal persecution for the past few months. It was only after President Trump started asking why the January 6thprotesters were still in jail after all this time that other outlets finally started paying attention. A lot of the reporters for those outlets seem genuinely shocked at the casually routine torture of Americans by the Biden regime.

Greg Kelly finally covered the story on Newsmax this past week, when he interviewed an attorney named Joseph McBride. Mr. McBride represents the gentleman who put his boots up on Nancy Pelosi’s desk on January 6th. McBride told Greg Kelly:

I like Greg Kelly. But he seemed truly surprised that this was happening. He responded: “Hold on a second. Who’s beating them up?”

McBride informed Kelly’s audience that the guards in DC Mayor Muriel Bowser’s disgusting jail are beating the prisoners on a regular basis and have been doing so since January when the Department of Justice started locking them up.

McBride also described the beatings that his client – the gentleman who put his boots on Pelosi’s desk – received:

“He was beaten. He was dragged. He was hog-tied. One time his pants dropped below his ankles exposing his private parts while he was taking a beating in front of a female officer. And he had to beg and plead to pull his pants up.”

The American guards at Abu Ghraib prison in Iraq were court martialed and sent to prison for treating Islamic terrorist POWs like that. Every single one of those American Trump supporters – on American soil – is supposed to be considered innocent until proven guilty. And even if they had been accused of committing horrible crimes, they’re still not supposed to be hogtied, stripped and beaten. Most of them are in jail for trespassing in a government building which they (as taxpayers) own and for briefly interrupting a meeting in the US Senate.

Click Here for Instructions on How to Send Letters of Encouragement to the Political Prisoners being Held by the Corrupt FBI/DOJ and Biden Regime in the DC Prisons AND SHARE THIS LINK!

Despite the torture and daily beatings, it sounds like the political prisoners are keeping their spirits up. They reportedly sing the National Anthem every night at 9 pm, which must drive their America-hating prison guards nuts!

The group that is organizing protests in support of the prisoners is called Look Ahead America. They’re a PAC based out of Washington, DC. They don’t have any additional protests planned on their News page as of this writing but say that are planning more actions in support of the jailed patriots.

Meanwhile, the Republican leadership in DC continues to infuriate me over this. They’re focusing all of their attention on the people being mistreated in Cuba right now but won’t lift a finger for American voters who are being treated just as badly as the Cubans a few hundred feet away in a DC jail.

And if there isn’t a protest coming to your area in support of the prisoners, there is one additional way that you can help. A group called the Patriot Mail Project has posted the names, inmate numbers and addresses for the jailed Trump supporters. You can send any of them a letter with some words of encouragement or prayer and let them know that they are not forgotten.

PRAY EVERY DAY FOR THESE PATRIOTS! PRAY FOR THEIR RELEASE AND FOR THOSE RESPONSIBLE FOR THESE ABUSES TO ONE DAY BE HELD ACCOUNTABLE!


Source: www.Conservativeworldnews.com
Write to the Prisoners by Tom Zawistowski is licensed under N/A N/A