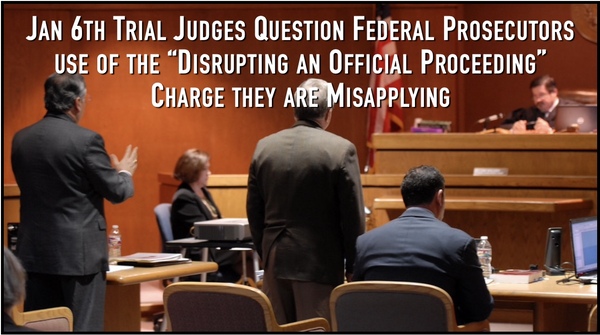 The legal arguments in favor of jailing the January 6 political prisoners continually without trial are falling apart. Defense attorneys continue trying to get even the most serious charges against their clients dismissed. Not the “insurrection” or “sedition” charges. Those actually don’t exist. We still have not, to this date, seen a single person who was charged with taking a gun into the Capitol building (which you would expect in a true insurrection). Nor has any defendant been charged with assaulting a police officer or anyone else. No, the felony charge that is falling apart is the one of briefly interrupting a meeting of Congress during a legitimate First Amendment-protected protest.

I’ve been calling this charge “briefly interrupting a meeting” for several months now, on purpose. And I explain the law this way for two reasons. First, because it’s true, and second, because that absurd definition explains just how badly the actual law is being misrepresented by the Justice Department under Attorney General Merrick Garland.

The official name of the criminal charge is “disrupting an official proceeding.” It’s a felony crime that carries a steep sentence of up to 20 years in federal prison. It is a poorly named crime because it sounds like it could mean one thing (disrupting basically any meeting of Congress) when in fact it means something entirely different.

At least two judges who will be hearing the cases against the Trump supporters next year have started to question the way the government is applying that law. That law is 18 USC § 1512, which I’ve written about previously when describing the way that the January 6 protesters are being legally abused by the Biden regime.

That was a law that was signed by George W. Bush, in response to Enron shredding documents as Congress was trying to investigate the company. The “official proceeding” that Enron disrupted was a lawful investigation, and Enron was dodging subpoenas and destroying evidence. A better way of describing the law, so that people could understand it better, might be “obstruction of justice in a congressional investigation.”

That’s how the law was intended to be used when it was written. George W. Bush even said so on the day when he signed it into law in 2002, noting that the law should not infringe on “the constitutional right to petition the government for redress of grievances.”

And now at least a couple of judges are starting to see the twisted logic that prosecutors are using to trample the rights of Trump supporters. Judge Amit Mehta noted this week, in a hearing for the group of defendants from Oath Keepers (some of whom were not even members of Oath Keepers), it’s a bit of a “stretch” to compare the Capitol protest to “document shredding.”

Judge Mehta then had a debate with prosecutors and defense attorneys to try to even figure out a definition of what they think the law means. Mehta asked if it’s disrupting of an official proceeding if someone stands up and yells in a confirmation hearing. Which is exactly what protesters did numerous times during the Brett Kavanaugh hearings. Prosecutors argued that it was not the same, because the January 6 protesters were trying to “scare” Members of Congress. Mehta then asked why prosecutors have never made that clear in any of their filings. In fact, this was the first time that any of us have heard that scaring Congress was the intent of the protesters.

One prosecutor argued that there are “no limitations” on what “official proceeding” means in the law. Well, that’s scary. If true, any political protest that Joe Biden doesn’t like can now land you in prison for 20 years. Judge Mehta does not seem to be buying that argument from prosecutors, although he hasn’t thrown the bogus charge out in favor of any of the defendants yet.

Judge Randall Moss, in a hearing for two different defendants, said that the statute suffers from a “constitutional vagueness problem.” Bingo! Unfortunately, Moss didn’t throw the charges of interrupting a meeting out either. So now we’re in a situation where the judges seem to understand that this charge against the Trump supporters is total BS – but they’re not willing to throw it out anyway.

I guess the good news is that as these cases move closer to trial next year, the prosecutors are proving themselves to be every bit as inept as Joe Biden himself. Hopefully these cases will be thrown out before that happens, because it’s clear that the protesters are being unjustly railroaded, and held in solitary confinement for completely absurd reasons.