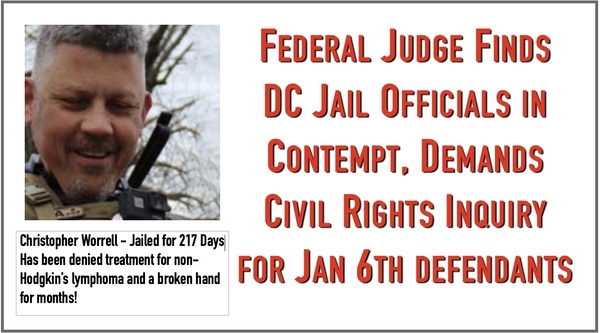 In a major rebuke of the Justice Department and D.C. Department of Corrections, District Court Judge Royce Lamberth today found the jail’s warden and director of the Department of Corrections in contempt of court for refusing to turn over records related to the care of Christopher Worrell, a January 6 detainee who suffers from non-Hodgkin’s lymphoma and a broken hand. He has been incarcerated under a pre-trial detention order sought by Joe Biden’s Justice Department and approved by the court’s chief judge since his arrest in March; Worrell has been in the D.C. jail used specifically to house January 6 defendants since April.

Lamberth scheduled the hearing on Tuesday after D.C. Jail Warden Wanda Patten and DOC Director Quincy Booth failed to comply with his October 8 order to submit the evaluation by an orthopedic surgeon, who determined in June that Worrell needed surgery for a broken hand he suffered in May, and also to submit Worrell’s medical requests related to needed cancer treatments. Jail officials and attorneys representing the department claimed the screw-up was a miscommunication but Lamberth rejected their argument. “I don’t accept that explanation,” Lamberth said. “No one noticed in jail that he’s sitting there in pain all the time? Does no one care?”

Worrell’s attorney, Alex Savron, told Judge Lamberth his client is being subjected to “cruel and unusual punishment” in the jail. A medical team recommended that Worrell start receiving six months of “intense” chemotherapy and radiation but jail officials were vague as to how they would care for Worrell’s side effects including ongoing pain and nausea.

Lamberth called the jail’s treatment of Worrell “inexcusable” and questioned aloud whether Worrell was being treated differently because he is a January 6 defendant. (I have reported here for months how the constitutional and human rights of January 6 detainees have been routinely violated at the D.C. jail.)

In an order filed after the hearing, Lamberth referred the matter to the attorney general “for appropriate inquiry into potential civil rights violations of January 6 defendants, as exemplified in this case.”

The FBI raided Worrell’s home in Cape Coral, Florida on March 12 and charged him with multiple offenses including spraying a police officer with pepper spray, disorderly conduct, and civil disorder. Worrell, who has no criminal record, never entered the building. A few days after his arrest, Beryl Howell, an Obama appointee and chief judge of the D.C. District court handling every January 6 case, reversed a lower court ruling allowing for Worrell’s release. The court was aware of Worrell’s cancer diagnosis but ordered him transported from Florida to the D.C. jail.

A trial date for Worrell has not been set.

Julie Kelly is a political commentator and senior contributor to American Greatness.

What Caused a Judge to Order an Investigation into the Jail Conditions for January 6 Defendants - October 15, 2021