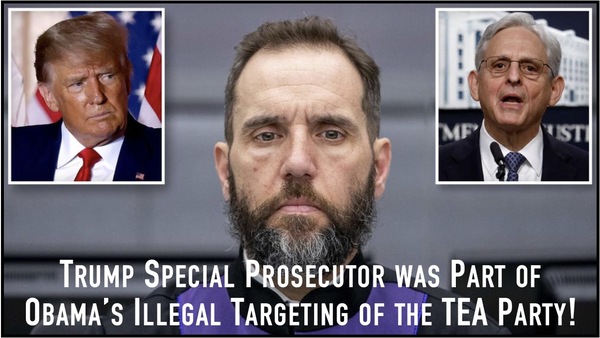 Click to Read our Press Release on Appointment of Special Counsel

Jack Smith, the special counsel appointed by Attorney General Merrick Garland to investigate former president Donald Trump’s possession of classified information, was a key figure in the Internal Revenue Service (IRS)’s infamous targeting of conservative non-profits, according to a 2014 report by Republicans on the House Oversight Committee.

On Oct. 8, 2010, Smith, then-Chief of the DOJ Criminal Division’s Public Integrity Section at the time, called a meeting with former IRS official Lois Lerner “to discuss how the IRS could assist in the criminal enforcement of campaign-finance laws against politically active nonprofits,” according to testimony from Richard Pilger, then director of the section’s Election Crimes Branch and subordinate of Smith’s, to the Oversight Committee. Lerner eventually resigned from the IRS in 2015 following criticism of her targeting of conservative groups when denying or delaying tax-exempt status.

Smith also pushed for criminal penalties of political non-profits that may have violated campaign finance laws.

“This seems egregious to me – could we ever charge a [18 U.S.C. §] 371 conspiracy to violate laws of the USA for misuse of such non-profits to get around existing campaign finance laws + limits?,” Smith wrote in an email to colleagues, per the Oversight Committee report. His email suggested that the department investigate conservative non-profits that reportedly may have violated campaign finance laws, according to The New York Times.

The impetus for the meeting was President Barack Obama’s public criticism of the Supreme Court’s ruling in Citizens United v. FEC, according to the report. 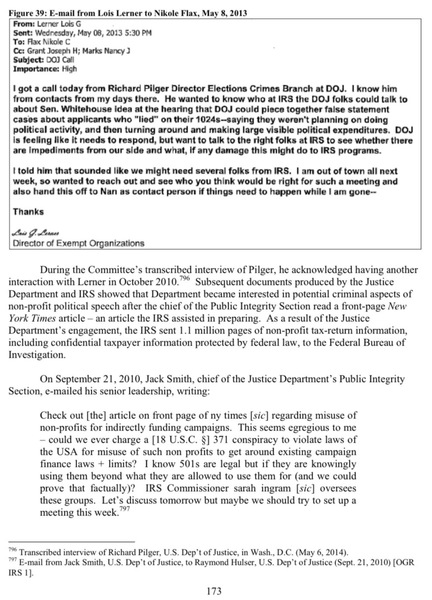 The Times’s article described how 501-registered charities, with ties to conservative lawmakers, were receiving donations from corporations and interest groups. At the time, these groups were also lobbying the same lawmakers on Capitol Hill, the Times writing that “The sponsors – AT&T, Chevron, General Dynamics, Morgan Stanley, Eli Lilly and dozens of others – contribute millions of dollars annually in gifts ranging from token amounts to a check for $5 million.”

Smith’s meeting with Lerner shortly followed the article. Smith also urged the IRS to be “more vigilant to the opportunities from more crime in the … 501(c)(4) area.”

Click Here to Watch the ACLJ Documentary "Targeting U.S." which details the illegal attacks by the Obama IRS against common citizens in the TEA Party in order to Steal the 2012 Presidential Election

IRS officials under Lerner were later involved in selecting groups with the words “tea party,” “patriot” or “9/12” in their names for audits, following Lerner’s meeting with Smith. The IRS’s scrutiny of non-profit 501(c)(3) and 501(c)(4) tax-exempt statuses applied for by these groups prevented them from fully participating in the 2012 presidential election between Obama and Republican nominee Mitt Romney, as admitted by the agency in 2013.

Lerner later resigned from the IRS and pled the 5th Amendment when questioned about her actions by the Oversight Committee, which led to her being held in contempt of Congress. However, Smith and his team had “serious conflicts of interest stemming from their interaction with the IRS,” the report alleged. (Editors Note: The TEA Party won both lawsuits against Obama's IRS where it was proved that they illegally targeted the TEA Party Groups for Political Reasons in an effort to win the 2012 Election and were awarded a $3.5 Million settlement.)

Smith was also a leader in the prosecution of former Republican Gov. Bob McDonnell of Virginia on federal corruption charges in 2014, for accepting gifts from a lobbyist that he later repaid. The U.S. Supreme Court unanimously reversed his conviction in 2016, and all charges were later dismissed, though commentators have argued that the conviction stopped him from running for president in 2016.

In his role as special counsel, Smith will oversee two investigations into Trump. One is regarding whether he or his affiliates “unlawfully interfered in the transfer of power following the 2020 presidential election,” per the order of appointment.

The other concerns Trump’s possession of classified information at his private Mar-a-Lago estate following the expiration of his term in violation of federal law, leading to a raid of Mar-a-Lago by the FBI on Aug. 8.

BREAKING: Wife of Trump special counsel produced Michelle Obama documentary, donated thousands to Biden . . . we are sure that Smith is NOT BIASED! Right?

Trump has alleged that the FBI unlawfully seized materials subject to attorney-client privilege, and sued to have the documents reviewed by a Special Master to judge whether or not they could be used in the DOJ’s criminal investigation of him, per court filings. Some legal commentators claim that Trump is likely to be indicted on criminal charges for possessing classified information as a private citizen.

“Based on recent developments, including the former President’s announcement that he is a candidate for President in the next election, and the sitting President’s stated intention to be a candidate as well, I have concluded that it is in the public interest to appoint a special counsel,” said Attorney General Garland, per a DOJ press release. Trump, for his part, has said that he “won’t partake” in the special counsel’s investigation.