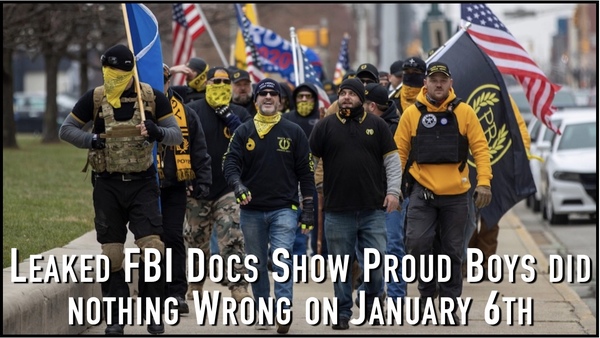 The FBI and the Department of Injustice continue to viciously politically persecute American Citizens and terrorize the public.

Shame on the McCarthy-like January 6th Unselect Committee for abusing their power and using groups like the Proud Boys and Oath Keepers as fall guys so they can punish their political opposition!

This is not the United States we were promised.

Their lies are being exposed.

A whistleblower has leaked a treasure trove of documents and text messages, some marked “Highly Sensitive”, to the Gateway Pundit. These documents contain incredible exculpatory evidence proving the Department of Justice was aware that a group of Indicted Proud Boys were innocent- yet are prosecuting them anyway.

You can read the entire dump of documents by CLICKING HERE, which includes hundreds of pages of transcripts of audio-recorded interviews with an Assisting United States Attorney, FBI Agents and their “Confidential Human Source”. The Confidential Human Source, or CHS, infiltrated the Kansas City Proud Boy Group for over a year and a half before the January 6th event and kept the FBI goons informed on the group’s activity.

Our source who is familiar with the FBI informant and has identified him as James Ehren Knowles. According to the source, Knowles had gained the group’s total trust and was included in all group communications.

The informant told his handlers at the FBI that the Kansas City Proud Boy Group he was infiltrating and accompanied to the Capitol on January 6th “were not involved in, nor did they inspire the breaking of the barriers at the Capitol building. CHS describe the scene as the crowd doing it as a “herd mentality,” and that it was not organized. The crowd was shouting “stop the vote,” as they made their way to the Capitol building… There were no overt threats of violence made at that time.”

DEVELOPING: What you need to know about the FBI Jan 6 Proud Boys informant leak…

Not only that, but the informant also testifies to the FBI that Proud Boys planned to come to Washington DC to risk their own safety to protect average Trump Supporters from Antifa attacks so MAGA folk could enjoy the day and “get back to their hotels safely”. Meanwhile, the drinking fraternity, along with the ex-military/law enforcement group the “Oath Keepers”, have become the fall guys along with President Trump for the entire phony “Insurrection.”

Every single Kansas City Proud Boy and other individuals that the rat reported to his handlers in the document dump are indicted and facing decades in prison EVEN THOUGH THE FBI INFORMANT THAT WAS WITH THEM THAT DAY REPORTED THEIR INNOCENCE! One of the men (William Chrestman) has been detained at DC Gitmo in pre-trial detention for over a year and a half to date. A total of six people (including a woman who was pregnant at the time) are being charged with Conspiracy, Obstruction of an Official Proceeding and Aiding and Abetting (this carries a maximum 20 year penalty), Obstruction of Law Enforcement During Civil Disorder and Aiding and Abetting, Threatening a Federal Officer, Entering and Remaining in a Restricted Building or Grounds and Carrying a Deadly or Dangerous Weapon.

For background, there are currently two existing Proud Boy Group Indictments- the Seditious Conspiracy one involving Enrique Tarrio and other leaders, and the Kansas City Proud Boy Indictment involving the group that the FBI informant infiltrated.

The FBI Plant made it clear to his bosses that the Proud Boys and their friends had no idea what they were walking into, there was NO CONSPIRACY or pre-planning to enter the Capitol, and Proud Boys helped law enforcement inside the Capitol.

He reported that the members of the groups never mentioned: “stopping the electoral college or certification of the election” as the FBI clearly was hoping he would report.

The agents press him throughout his interviews (see full dump of audio recording transcripts below) and obviously did not like what they were hearing as it did not fit their narrative.

These documents would be buried forever and never see the light of day if they were not leaked to us by a brave whistleblower.

Click Here to Read MUCH MORE on this Story and get access to Text Messages and Voice Files from the Informant to the FBI at the Gateway Pundit.Com