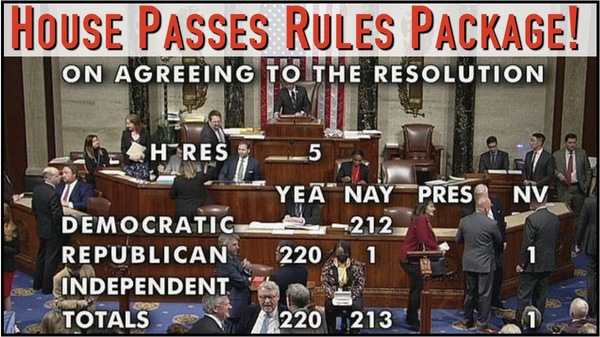 This Page Is going to Serve as a running Aggregation of Links to Stories about the things that the New House passes over the next two years!

Please bookmark it in your browser and visit it often!

The COVID-19 Select Subcommittee Will Give Long-Overdue Answers to the American People - Feb 6, 2023

House Speaker Fight is HUGE WIN for MAGA Movement! This is What we Won! Jan 9, 2023

The 55-page package includes some, but not all, of the concessions McCarthy made to the group of 20 House Republicans to get his speakership bid across the line early Saturday morning and after 15 floor votes.

It includes the motion to vacate provision, which allows just one member to move to remove the House speaker - one of the top conservative demands.

It also does away with proxy voting and virtual participation in Congressional committee meetings - which Democrats put in place to deal with the spread of COVID in the Capitol complex.

'For far too long the House allowed members to do their jobs from home without ever setting foot in Washington,' Republican Rep. Tom Cole said on the House floor.

Cole is taking over the chairmanship of the powerful House Rules Committee and went through some of the changes included in the rules package on the House floor before voting kicked off Monday night.

He noted that with Republicans taking over committee leadership, the select committee that had been investigating the COVID-19 pandemic would reorient and be focused on looking into COVID's origins and how shutdowns adversely impacted the country.

The House Republicans are also creating a select committee on China competition, he said. They will also look into the so-called 'weaponization' of the Department of Justice.

The new rules included a number of provisions in line with fiscal conservatism.

Instead of what Democrats called 'PAYGO' - pay as you go - which required legislation that added to the deficit to come with tax increases or spending cuts, Republicans are instituting 'CUTGO,' which means only spending cuts can offset mandatory spending increases.

House Republicans doubled down on not hiking taxes by including in the rules package a threshold of three-fifths of the body to implement any new tax increases.

Republicans were also suspending the so-called 'Gephardt Rule,' which automatically raised the debt ceiling when a budget was passed.

They brought back the so-called 'Holman Rule,' which allows Congress to amend a spending bill by cutting programs, firing federal employees or reducing their salaries.

Why the House Speaker Fight is a HUGE MAGA WIN!

All 212 Democrats voted against the rules package.

Only one Republican, moderate Rep. Tony Gonzales of Texas, voted against it.

His fellow Texan, Rep. Dan Crenshaw, did not vote.

Moderate Republican Rep. Nancy Mace of South Carolina ended up voting for the package after initially saying she was on the fence.

Monday marked the House's first day back in session after Friday night and Saturday morning's dramatic showdown that eventually allowed for McCarthy to capture the speakership.

The House is also vote Moday night on an IRS bill that rolls back money to hire 87,000 IRS Investigators.