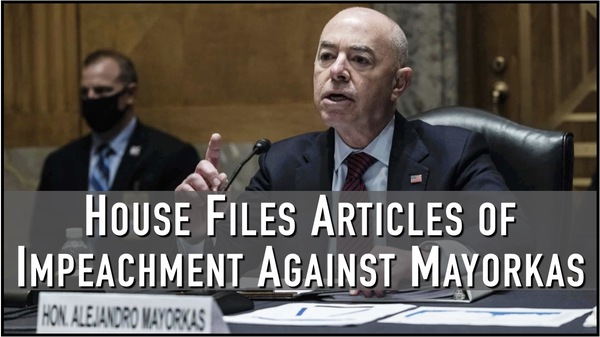 Rep. Pat Fallon (R-TX), filed articles of impeachment against Department of Homeland Security Secretary Alejandro Mayorkas due to his mishandling of the crisis at the southern border.

In the first few days of the 118th Congress, House Republicans have been moving forward with a list of promises and priorities, which includes seeking to hold the Biden administration accountable. On Monday, Rep. Pat Fallon (R-TX), filed articles of impeachment against Department of Homeland Security Secretary Alejandro Mayorkas due to his mishandling of the crisis at the southern border. The articles, known as House Resolution 8, have also been referred to the House Judiciary Committee.


A report from Fox News, which Fallon linked to in hs pinned tweet, notes that the move is fulfilling a promise Fallon made last week, before being sworn in. "Since day one, Secretary Mayorkas’ policies have undermined law enforcement activities at our southern border," Fallon said in a statement at the time. "From perjuring himself before Congress about maintaining operational control of the border to the infamous ‘whip-gate’ slander against our border patrol agents, Secretary Mayorkas has proven time and time again that he is unfit to lead the Department of Homeland Security." Fallon also added that Mayorkas' willful actions have eroded our immigration system, undermined border patrol morale, and jeopardized American national security. He has violated the law and it is time for him to go."

In addition to laying out the "high crimes and misdemeanors" that the resolution accuses of Mayorkas of having violated, a background is provided on how bad the crisis at the border has become. Not only has there been record-high border crossings, but a particularly high amount of terrorists coming over the border. There are also concerns with fentanyl as well as the process being used to detain illegal immigrants.

As is laid out:

Under Secretary Mayorkas, more fentanyl has crossed the border in the last 2 months than in all of fiscal year 2019 under President Trump’s leadership. In fiscal year 2022, over 14,000 pounds of poisonous fentanyl was seized at the southern border. Fentanyl overdoses are the number one cause of death for individuals ages 18 to 45 nationwide.

Under Secretary Mayorkas, the Department of Homeland Security is also in violation the Immigration and Nationality Act (8 U.S.C. 1101 et seq.). This Act requires the Department of Homeland Security to detain inadmissible aliens arriving in the United States or aliens who are present in the United States without inspection until processed. In violation of the law, Secretary Mayorkas implemented catch-and-release directives such as the Notice to Report process and the parole plus Alternatives to Detention process. Through these misguided programs, over 1,000,000 illegal aliens have been recklessly released into the interior of the United States.

The resolution goes on to claim the following:

Secretary Mayorkas has undermined the operational control of our southern border and encouraged illegal immigration by doing the following:

(2) Ending the Migrant Protection Protocols, also known as “Remain in Mexico”, which was an indispensable tool to address the border crisis and restore integrity to the immigration system.

Secretary Mayorkas has violated the law and gravely endangered the national security of the United States through these actions.

Also brought up are claims of perjury, especially when it comes to him reassuring members of Congress, under oath, that the border is secure. When asked "do you continue to maintain that the border is secured" by Rep. Dan Bishop (R-NC) during a committee hearing last November, Mayorkas responded "yes, and we are working day in and day out to enhance its security, Congressman." In asking his question, Bishop had pointed out that the secretary had claimed the border was secure in numerous previous instances.

Not long after that November hearing mentioned above, Kevin McCarthy (R-CA), who is now the Speaker of the House, called on Mayorkas to resign, though the secretary and DHS remained stubborn and steadfast that Mayorkas was not going anywhere. "Secretary Mayorkas is proud to advance the noble mission of this Department, support its extraordinary workforce, and serve the American people," the DHS spokesperson even told Fox News in a stunningly tone deaf statement. "The Department will continue our work to enforce our laws and secure our border, while building a safe, orderly, and humane immigration system."

READ MORE OF THIS STORY AND BREAKING NEWS AT TOWNHALL.COM

Source: Townhall.com
Impeachment for Mayorkas by Tom Zawistowski is licensed under N/A N/A