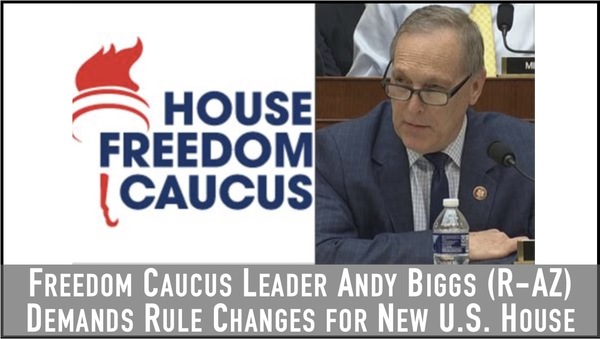 PLEASE READ the House Freedom Caucus' "Road Map for Incoming Republican Members of Congress" . . . to understand just how BROKEN our Government really is . .

Some of the key proposals would open up the legislative process so members can offer amendments in contrast to recent years when the majority House leadership and their staffs crafted large bills with little to no input from rank-and-file lawmakers.

The Freedom Caucus put together a 50-page document called the “A Road Map For Incoming Republican Members of Congress,” detailing the conservative group’s rule proposals. (Editors Note: Click Here to Download the PDF of that Document and READ IT! It will show you what your newly elected Congressman is up against in DC)

“Under current House rules, 430 of 435 members have no true opportunity to provide input into major legislation considered in the House of Representatives,” Biggs said in his opening statement at the meeting, which took place at the FreedomWorks office near the U.S. Capitol.

“Congress is the legislative branch, and we are elected by our constituents to be their voice in crafting, amending and debating the policy of the nation,” he added.

“But the current autocratic and leadership-driven process robs us, and more importantly our constituents, of the ability to participate meaningfully in the legislative process,” Biggs said. 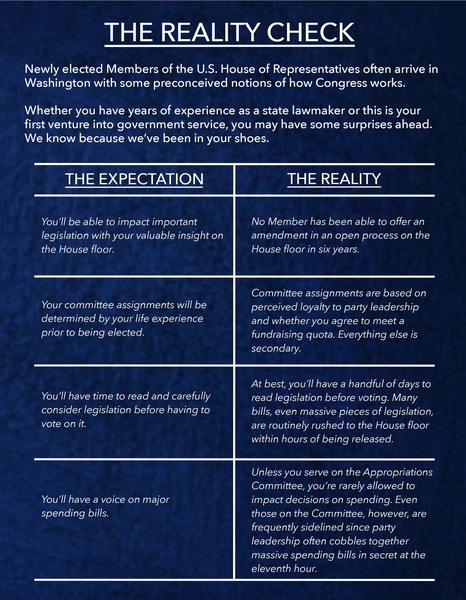 Some abuses under her tenure Biggs identified are same-day authority to pass legislation rather than giving members adequate time to review bills, the unilateral removal of Republicans from committees, and the instituting of proxy voting.


Biggs further noted the centralizing of power to House leadership is not a uniquely Democrat problem.

Under Republican Speaker Paul Ryan in the 115th Congress, a record number of bills came to the House floor with no amendments allowed, Biggs pointed out.

Ed Corrigan — president of Conservative Partnership Institute and a former Senate steering committee staff member — argued during the meeting that the legislative process is broken by design.

“Congress might be broken for the members, but it actually works very well for the swamp,” he said.

“It’s a well-oiled machine that produces whatever the swamp desires and treats rank and file members like sheep,” Corrigan continued. “Member participation has been extinguished in favor of a centrally controlled process with few staff and the leadership offices making all decisions in secret.”

Corrigan went on to argue that the narrow Republican majority works in the Freedom Caucus’ favor as its members seek to institute reform.

That power was on display Tuesday when 31 GOP members voted for Biggs to be the next speaker over House Minority Leader Kevin McCarthy.

McCarthy received 188 votes, but he will need 218 to earn the gavel in January, which means the Freedom Caucus has leverage as the new House rules are negotiated, Corrigan said.

“We should not be putting bills on the floor that get more Democrat votes than Republican votes,” he offered as one example of a rule change the caucus should demand.

She agreed with Corrigan that the House should reinstate “the majority of the majority rule.”

Click Here to Watch the Newest We the People Covention News & Opinion Podcast!

“Nothing comes to the House floor unless it receives a vote from the majority of Republicans,” Bovard said. She is clearly referring to the party whip count taken among members prior to a bill coming to the floor.

Similarly, Bovard advised that amendments that receive at least 10 percent of support from the Republican members should be brought to the floor for a full vote.

Finally, she called for ending the practice of “martial law,” i.e., top-down drafting of legislation with no input from members.

“It’s absurd and offensive frankly that these bills are written, giant bills are written behind closed doors with the input of a handful of lobbyists and leadership staff and then dropped on the membership,” Bovard explained.

Paul Teller — former executive director of the Republican Study Committee (a House conservative members caucus) and now head of the group Advancing American Freedom — zeroed in on appropriations bills as a key place for reform.

He recommended that all appropriations bills should be subject to open rules, meaning amendments can be offered.

Further, Teller contended that there should be a hard-and-fast 72-hour rule from when members can first see proposed legislation until when it receives a vote.

Biggs wants to see the Holman Rule re-instituted, which would allow Congress to vote to reduce the pay of government officials who do not comply with congressional subpoenas.

Rep. Victoria Spartz of Indiana, first elected in 2020, wants the House legislative process opened up to all members.

The congresswoman noted that she was surprised how different the legislative process is in Washington compared to when she served in Indiana’s state senate.

“I think it’s extremely important to have a debate and deliberation. This is how the greatest ideas are born. This is how we can serve the American people,” Spartz said.

Rep. Debbie Lesko, who was in top leadership in the Arizona senate, concurred.

“This place is a mess,” she said referring to the U.S. House.

CLICK HERE TO READ MORE AT THE PATRIOT PROJECT.COM