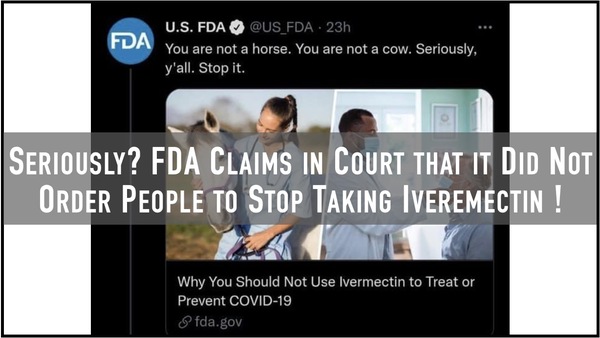 The U.S. Food and Drug Administration (FDA) telling people to “stop” taking ivermectin for COVID-19 was informal and just a recommendation, government lawyers argued during a recent hearing.

“The cited statements were not directives. They were not mandatory. They were recommendations. They said what parties should do. They said, for example, why you should not take ivermectin to treat COVID-19. They did not say you may not do it, you must not do it. They did not say it’s prohibited or it’s unlawful. They also did not say that doctors may not prescribe ivermectin,” Isaac Belfer, one of the lawyers, told the court during the Nov. 1 hearing in federal court in Texas.

“They use informal language, that is true,” he also said, adding that, “it’s conversational but not mandatory.”

The hearing was held in a case brought by three doctorswho say the FDA illegally interfered with their ability to prescribe medicine to their patients when it issued statements on ivermectin, an anti-parasitic that has shown positive results in some trials against COVID-19.

Ivermectin is approved by the FDA but not for COVID-19. Drugs are commonly used for non-approved purposes in the United States; the practice is known as off-label treatment.

The FDA created a webpage in 2021 titled “Why You Should Not Use Ivermectin to Treat or Prevent COVID-19” and later posted a link to the page on Twitter while writing: “You are not a horse. You are not a cow. Seriously, y’all. Stop it.” A second post stated: “Hold your horses, y’all. Ivermectin may be trending, but it still isn’t authorized or approved to treat COVID-19.”

In a separate page, the FDA said: “Q: Should I take ivermectin to prevent or treat COVID-19? A: No.”

Those actions interfered with the doctors’ practice of medicine, violating the laws including the Federal Food, Drug, and Cosmetic Act, the lawsuit alleges.

It asked the court to rule the actions unlawful and bar the FDA from directing or opining as to whether ivermectin should be used to treat COVID-19.

Jared Kelson, an attorney representing the plaintiffs, told the court during the hearing that that informal claim “doesn’t explain the language they actually used: ‘Stop it. Stop it with the ivermectin.'”

The FDA’s actions “clearly convey that this is not an acceptable way to treat these patients,” he argued.

Plaintiffs in the case include Dr. Paul Marik, who began utilizing ivermectin in his COVID-19 treatment protocol in 2020 while he was chief of pulmonary and critical care medicine at Eastern Virginia Medical School and director of the intensive care unit at Sentara Norfolk General Hospital.

After the FDA’s statements, Marik was told to remove the protocol from the school’s servers while Sentara issued a memorandum to hospitals telling them to stop using ivermectin against COVID-19, with a citation to the FDA.

Marik was forced to resign from his positions because he couldn’t prescribe ivermectin due to the FDA’s statements, the suit alleges.

The government has moved to dismiss the complaint, asserting plaintiffs lack standing because the injuries cannot be traced back to the FDA.

Source: The Epoch Times
FDA Lie about Ivermectin by Tom Zawistowski is licensed under N/A N/A