What happened to SCOTUS Leaker Investigation? 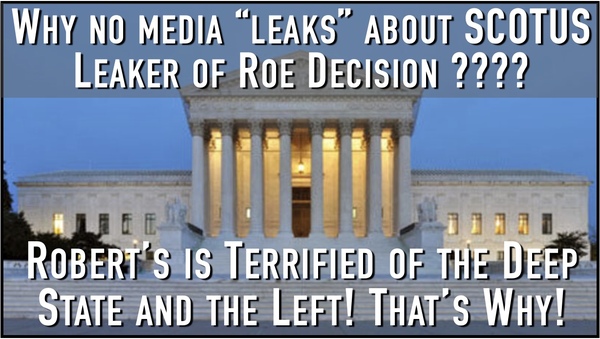 The commotion and fallout from the overruling of Roe v Wade is continuing, but for the "egregious leaking" of the draft opinion, the cap is still off of the bottle.

Who was the leaker? A clerk to one of the justices; a typist; a runner or a janitor? Was it the angry sentiment of one of the two very liberal woman justices? Chief Justice John Roberts has assured citizens that the offender will be identified and sanctioned as appropriate under the law.

After almost 50 years and 63 million abortions for any or no reasons, the constitutional protections for abortions have been canceled by the Supreme Court The question of who can now abort her fetus is in the purview of each of the 50 states as determined by elected representatives.

A firestorm of discord and protests came about last May 2 when a draft opinion in the case of Dobbs v. Jackson Women’s Health Organization was leaked to the media, and it foretold that Roe v. Wade was on the chopping block and very likely would be overruled by the high court's strong conservative majority. Seven weeks later, the final opinion in the case was handed down and it mirrored the draft opinion removing abortions from being a medical procedure based upon a woman's right to choose, and protected by the U.S. Constitution.

On May 3, the day after the horrendous leaking of the draft opinion authored by Justice Samuel Alito, Chief Justice John Roberts condemned the betrayal of trust and said it was the first time that had ever happened in the court's 250 years. "I have directed the Marshal of the Court to launch an investigation into the source of the leak," the chief justice said in a statement.

The individual responsible for the leaking will be found and identified and dealt with, using whatever sanctions are available under the law, it was asserted. Roberts emphasized that court workers "have an exemplary and important tradition of respecting the confidentiality of the judicial process and the leak was a singular and egregious breach of that trust.

According to Mark Sherman of the Associated Press, there has been only incredible silence from the court on the investigation. Many questions have been emailed to the court, he said, but the answer from the court has been "no comment." To every and all questions, the court remains silent.

It raises the question of whether the investigation has been set aside permanently — maybe the court has too many other more important matters to contend with? Investigations call for serious strategy and manpower, even possible lie detector exams, and perhaps the high court does not have the resources or expertise to conduct such an inquiry.

There are nine justices of the U.S. Supreme Court and each has four clerks and there are typists and runners and a cleaning crew. Six of the justices are considered conservative and all subsequently voted to overrule the Roe v. Wade case. Three other justices are considered to be very liberal and they dissented to the majority opinion. Some 70 persons might have had access to the drafts, the associated press reporter has speculated.

My guess as a lawyer, who is acquainted with the rules of the Supreme Court and the trust given to those around those hallowed halls, is that the culprit who breached the trust is known to the Chief Justice and very likely to the other justices and the clerks. I suspect that there was a confession or an admission. The clerks and typists have known all along who it was that most likely slipped the text of the Alito draft opinion to the Politico newsman.

For whatever reason, further stories of the leaked document and the "leaker" may just disappear like a strong wind. The associated press newsman has recounted in an article that back in 1973, Chief Justice Warren Burger was infuriated by the leak of the Roe v. Wade decision a few hours ahead of its scheduled announcement. Burger threatened to subject employees to lie detector tests, but the leaker quickly came forward and explained that its release had been an accident.

Of course, the leaking of the Alito draft opinion was no accident. It could be that that someone may well be getting a pass.

Clarence Thomas, one of the nine justices on the supreme court, said that the breach of trust has irrevocably harmed the court. "When you lose that trust, especially in the institution that I am in, it changes the institution fundamentally. You begin to look over your shoulder. It's kind of like an infidelity that you can explain, but you can't undo."

Bill Juneau worked for 25 years as a reporter and night city editor at the Chicago Tribune. Subsequently he became a partner in a law firm and also served as a village prosecutor and as a consultant to the Cook County Circuit Court and to the Cook County Medical Examiner. He is currently writing columns and the 'Florida Bill' blog.