Former President Donald J. Trump unveiled a free-speech policy platform on Thursday to “shatter the left-wing censorship regime and reclaim the right to free speech for all Americans.”

The 45th president shared a video to his Truth Social account where he details a number of policy steps he would enact, if elected president, to prohibit censorship by government agencies and big tech companies. 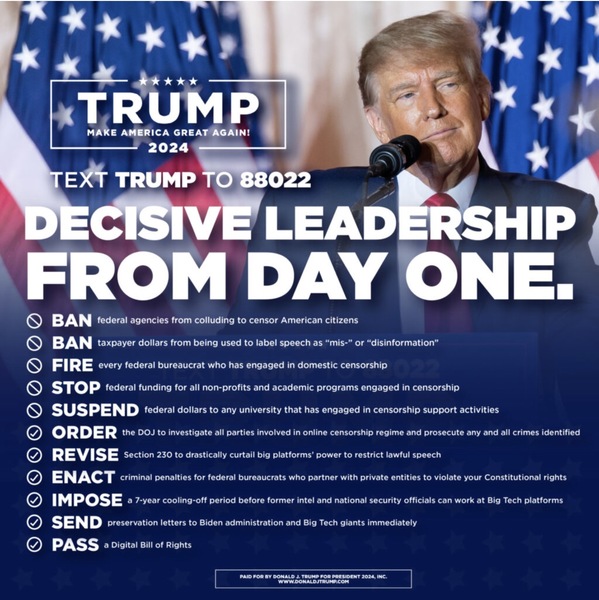 If we don’t have free speech then we just don’t have a free country. It’s as simple as that. If this most fundamental right is allowed to perish, than the rest of our rights and liberties will topple, just like dominoes, one by one, they’ll go down. That’s why, today, I’m announcing my plan to shatter the left wing censorship regime and to reclaim the right to free speech for all Americans, And reclaim is a very important word in this case because they’ve taken it away. In recent weeks, bombshell reports have confirmed that as soon as the group of deep State bureaucrats, Silicon Valley tyrants, left-wing activist, and depraved corporate news media, have been conspiring to manipulate and silence the American people. They have collaborated to suppress vital information on everything from elections to public health. The censorship cartel must be dismantled and destroyed and it must happen immediately and here is my plan.

First, within hours of my inauguration I will sign an executive order banning any federal department or agency from colluding with any organization, business, or person to sensor, limit, categorize or impede the lawful speech of American citizens. I will then ban Federal money from being used to label domestic speech as mis or dis information and I will begin the process of identifying and firing every Federal bureaucrat who has engaged in domestic censorship directly or indirectly, whether they are the Department of Homeland Security, the Department of Health and Human Services, the FBI, the DOJ, no matter who they are.

Second, I will order the Department of Justice to investigate all parties involved in the new online censorship regime,, which is absolutely destructive and terrible and to aggressively prosecute any and all crimes identified. These include possible violations of federal civil rights law, campaign finance laws, federal election law, securities law, and antitrust laws, the Hatch Act, and a host of other potential criminal, civil regulatory, and constitutional offenses. To assist in these efforts I am urging House Republicans to immediately send preservation letters, and we have to do this right now, to the Bible administration, the Biden campaign, and every Silicon Valley tech giant ordering them not to destroy evidence of censorship.

Third, upon my inauguration as president I will ask Congress to send a bill to my desk revising section 230 to get big online platforms out of censorship business. From now on digital platform should only qualify for immunity protection under Section 230 if they meet high standards of neutrality, transparency, fairness, and non-discrimination. We should require these platforms to increase their efforts to take down unlawful content such as child exploitation, and promoting terrorism, while dramatically curtailing their power to arbitrarily restrict lawful speech.

Fourth, we need to break up the entire toxic censorship industry that has arisen under the false guys of tackling so-called mis and disinformation. The federal government should immediately stop funding all nonprofits and academic programs that support this authoritarian project. If any U.S. university’s discovered to have been engaged in censorship activities or election interferences in the past, such as flagging in social media content for removal or blacklisting, those University should lose Federal research dollars and federal student loan support for a period of five years and maybe more. We should also enact new laws laying out clear criminal penalties for federal bureaucrats who partner with private entities to do an end-run around the Constitution and deprived Americans of their first, fourth, and fifth amendment rights. In other words deprive them of their vote. And once you lose those elections, and once you lose your borders like we have, you no longer have a country. Further more to confront the problems of major platforms being infiltrated by legions of former deep staters and intelligence officials, there should be a seven-year cooling-off period before any employee of the FBI, CIA, NSA, DNI, DHS or DoD is allowed to take a job at a company possessing vast quantities of U.S. user data.

Fifth, the time has finally come for Congress to pass a digital Bill of Rights. This should include a right to did digital due process. In other words government officials should need a court order to take down online content, not send information request such as the FBI was sending to Twitter. Furthermore when users of big online platforms have their content or accounts remove, throttle shadow banned, or otherwise restricted, no matter what they use, they should have the right to be informed that it’s happening, the right to a specific explanation of the reason why, and the right to a timely appeal. In addition, all uses over the age of 18 should have the right to opt out of content moderation and curation entirely, and receive and unmanipulated stream of information, if they so choose.

The fight for free speech is a matter of victory or death for America, and for the survival of Western Civilization itself. When I am president this whole rotten system of censorship and information control will be ripped out of the system at large, there won’t be anything left. By restoring Free Speech will begin to reclaim our democracy and save our nation.

Thank you, and God bless America.