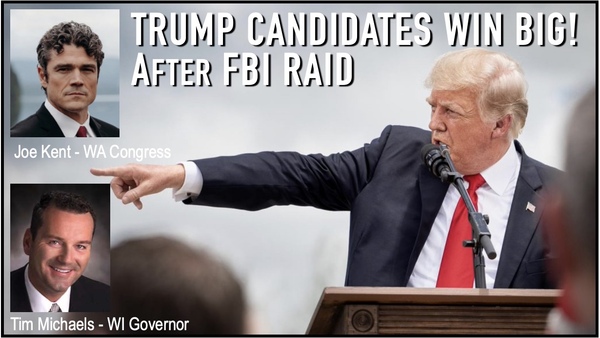 The concession was further proof of the political price paid by Republicans who dared to impeach Trump over his role in stoking the January 2021 assault on the U.S. Capitol. Of the 10 House Republicans who joined Democrats in that vote, Herrera Beutler was the seventh to retire or be ousted in a primary.

Kent, an Army combat veteran and first-time candidate, will face Democrat Marie Gluesenkamp Perez in November. She placed first in the primary with about 31% of the vote to 23% for Kent and 22% for Herrera Beutler.

“Joe Kent just won an incredible race against all odds in Washington State. Importantly, he knocked out yet another impeacher, Jaime Herrera Beutler, who so stupidly played right into the hands of the Democrats,” Trump said. “Joe is a wonderful guy, who bravely served our Country as a Green Beret. He has a truly bright future.”

Kent ran a campaign marked by loyalty to Trump — echoing the former president’s false claims about the 2020 election and promoting an “America First” agenda, including a near-total shutdown on immigration and refugees. He also has vowed to move immediately to impeach President Joe Biden if elected and to launch investigations of Democrats.

READ THE REST OF THIS STORY AT THE SEATTLE TIMES

Kleefisch served as lieutenant governor under then-Gov. Scott Walker, who also endorsed her in the race. Michels will go on to face Wisconsin Democratic Gov. Tony Evers in the November election.

READ MORE ON THIS STORY AT JUST THE NEWS