Is this the KEY to House Republicans Fighting Back? 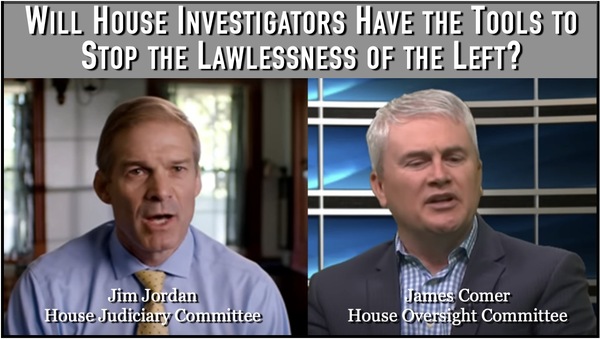 Will House have the Tools? by Tom Zawistowski is licensed under N/A N/A

Will House Committee Chairmen be given unilateral authority to issue subpoenas under the GOP rules package or be forced to get a committee vote?

Even as ballot counting drags through overtime, Republicans in the House are revving up a vast investigatory apparatus to probe everything from vaccine injury and COVID-19 origins to FBI politicization and the Hunter Biden scandal.


And the first fruits of that oversight work may be released even before the holidays, a deep look into what congressional leaders and Capitol Police executives knew about threats prior to the Jan. 6, 2021 riot and their failures to prepare security adequately.

But first they need the tools.

One essential question that needs to be resolved as early as this week is whether the House chairmen will be given unilateral authority to issue subpoenas under the GOP rules package or be forced to get a committee vote where Democrats or one recalcitrant Republican can foil an investigation.

Likewise, the chairmen need an enforcement tool for federal witnesses or agencies who don't comply readily. That's because the Biden DOJ is unlikely to help.

Lawmakers like Comer want to revive the Civil War-era Holman Rule, which allows Congress to defund the office, program or salary of a witness not complying with congressional subpoena or oversight authority, a powerful tool for both legal compliance and budget cutting.

"I think this is something that we should use, and we should use it every day," the Kentucky legislator told Just the News recently. "And that's something that I want to use in my toolbox in the House Oversight Committee to try to shrink the size of government and get rid of some of these useless bureaucrats that are just a drain on the American taxpayers."

If the chairmen are unilaterally empowered, then Comer, is prepared to use the Oversight Committee to compel testimony next year from Hunter and James Biden to force them to answer corruption questions and from Homeland Security Secretary Alejandro Mayorkas to talk about the insecure southern border.

Meanwhile, Jordan (R-Ohio) is ready to put a parade of FBI whistleblowers on the stand to illustrate how politics has infected the bureau.

The GOP already has a few surprises ready even before the new Congress starts in January.

With the blessing of House Republican Leader Kevin McCarthy, retiring Rep. Rodney Davis (R-Ill.) and his team on the House Administration Committee, along with Indiana Republican Rep. Jim Banks' staff, have assembled emails, text communications and other evidence that was ignored by the Democrat-led special committee on the Jan. 6 tragedy.

Sources familiar with the evidence say an initial report has already been drafted and provides fresh evidence of what the official mayors of the Capitol — House Speaker Nancy Pelosi and Senate Majority Leader Chuck Schumer — and the security and political staff around them were told and not told prior to Jan. 6 security threats ahead of time.

The lack of security precautions included failing to activate all of the Capitol civil disturbance units, refusing the Trump Pentagon's Jan. 2, 2021 offer of National Guard troops, failing to alert frontline commanders and officers about the intelligence or fortify doors and elevators used by lawmakers, Capitol Police documents reviewed by Just the News show.

READ MORE OF THIS STORY INCLUDING DETAILS ABOUT COVID AND BIG TECH INVESTIGATION AT JUST THE NEWS.COM

Source: Just the News.com
Will House have the Tools? by Tom Zawistowski is licensed under N/A N/A