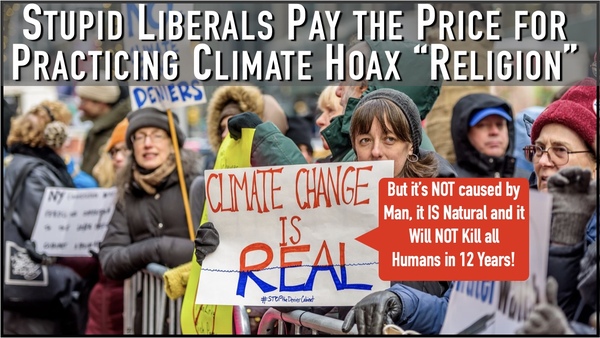 The Hypocracy and the Dangers of the Climate Hoax Religion and the Fear Mongering by the Anti-Capitalist Climate Commies are becoming evident to all but those who have been Indoctrinated!

Story #1: Colorado customers 'chose to be part of' the program that locked their thermostats at 80 Degrees, the company said . . .


Xcel Energy, a utility company based in Minneapolis, Minnesota, confirmed that 22,000 customers in the Denver, Colorado area who were signed up for the Colorado AC Rewards program were locked out of their thermostats for several hours on Tuesday, KMGH-TV reported.

Tony Talarico, an Xcel Energy customer in Arvada, Colorado, told KMGH-TV that he attempted to turn up the air conditioning as temperatures creeped into the 90s on Tuesday but was greeted with a message from this thermostat declaring an "energy emergency" and prevented from turning the dial.

In a statement, Xcel Energy pointed out that the customers were part of a rewards program that gave them a discount on their energy bill in exchange for permission to give the company some control over their smart thermostats. (Having a Smart Thermostats Not A Very Smart Decision Apprently!)

"It's a voluntary program," Emmett Romine, vice president of customer solutions and innovation at Xcel, told KMGH-TV. "Let's remember that this is something that customers choose to be a part of based on the incentives."

Customers receive a $100 credit when they sign up for the program and $25 annually. The company says the program helps make the system more reliable. . . (Except when it's NOT!)


California residents are being asked not to charge their electric vehicles to conserve energy amid a brutal heatwave — just days after the state announced a plan to ban sales of new gas-powered cars by 2035.

The plea comes as the Golden State sizzles in triple-digit temperatures, but the irony of the appeal was not lost on critics of the ambitious plan, expected to set the pace for a national and international shift to electric vehicles.

US House Republican Whip Steve Scalise (R-La.) derided the about-face as a “joke.”

California is now telling people to “avoid using large appliances and charging electric vehicles” from 4-9pm.  This from the same state that’s going to force everyone to buy electric cars by 2035. This is what Democrat control looks like—and they want it nationwide. What a joke.

The California Independent System Operator, which runs the state’s power grid, issued multiple bulletins this week warning of “extreme heat” during the Labor Day weekend that is “likely to strain the grid with increased energy demands.”

Story #3:  Despite "Predictions" of Catistrophic Hurrican Season due to Climate Change - No ‘Named’ Atlantic Hurricanes for Most of July and August, First Time Since 1941 . . .

NOAA said that the increased activity anticipated in this year's hurricane season is attributed to several climate factors, including the ongoing La Niña that is likely to persist throughout the hurricane season, warmer-than-average sea surface temperatures in the Atlantic Ocean and Caribbean Sea, weaker tropical Atlantic trade winds, and an enhanced West African monsoon. . . .

There were zero named tropical storms or hurricanes between July 3 and Aug. 30, which is the first time such a phenomenon has occurred in more than 80 years, forecasters noted this week.

“It has been surprisingly and freakishly quiet in the Atlantic,” University of Miami hurricane researcher Brian McNoldy told The Associated Press this week, pointing out that weak Tropical Storm Colin fizzled out on July 2 and there’s been nothing since.

A review of the National Hurricane Center’s (NHC) forecast maps shows there is one tropical depression in the northern Atlantic Ocean that appears to be heading north further into the ocean. There are no other depressions, although there is one disturbance that has a 60 percent chance of forming into a named storm in the next 48 hours.

“For the first time since 1941, the Atlantic has had no named storm (e.g., tropical storm or hurricane) activity from July 3rd-August 30th,” wrote Colorado State University hurricane researcher Phil Klotzbach on Twitter.

Lesson Learned: "If they can't even predict how many Hurricanes will happen in the Next Six Months based on "Climate Models", what makes ANYONE but a Climate Hoax "Religion" Believer think that these "scientists" can predict the "Climate" on Earth 100 Years from NOW????


Global economies are facing a potential energy shock—the third such shock of the past half century. Energy costs and security have returned to center stage, as has the realization that the world remains deeply dependent on reliable supplies of petroleum, natural gas, and coal. And all this has arrived during an inflation itself partially the result of higher energy prices that are raising production and transportation costs across industries.

In these circumstances, policymakers are beginning to grasp the enormous difficulty of replacing even a mere 10% share of global hydrocarbons—the share supplied by Russia—never mind the impossibility of trying to replace all of society’s use of hydrocarbons with solar, wind, and battery (SWB) technologies. Two decades of aspirational policies and trillions of dollars in spending, most of it on SWB tech, have not yielded an “energy transition” that eliminates hydrocarbons. Regardless of climate-inspired motivations, it is a dangerous delusion to believe that spending yet more, and more quickly, will do so. The lessons of the recent decade make it clear that SWB technologies cannot be surged in times of need, are neither inherently “clean” nor even independent of hydrocarbons, and are not cheap.

The only path to significantly lower energy prices while maintaining vibrant economies—and unlinking them from Russian oil and natural gas—is to radically increase the production of hydrocarbons. The U.S. holds the greatest potential for achieving this outcome, and without government subsidies. On the contrary: increasing the production of these energy sources would generate government revenues, increase U.S. geopolitical soft power, and, in due course, save the world trillions of dollars.

America’s hydrocarbon-centric industries could, if unleashed, replicate the unprecedented growth in oil and natural gas production over the past 15 years. That growth resulted in the U.S. becoming the world’s biggest producer and a major exporter of both. The crucial question now is whether America has the political will to forge an energy path based on the lessons learned and the urgencies of the new geopolitical landscape.

READ: The Religion of Climate Change And the New Doomsday Scenario

READ: 10 Creepy Reasons Climate Change Is Starting To Look Like A Religion

Do NOT Accept the Lies, Do Not Encourage those who are Indoctinated, Vote Out EVERY person in Elected Office who Professes to Belive in the Climate Religion!


Click Here to Watch the Newest Edition of the We the People Convention News & Opinion Podcast!