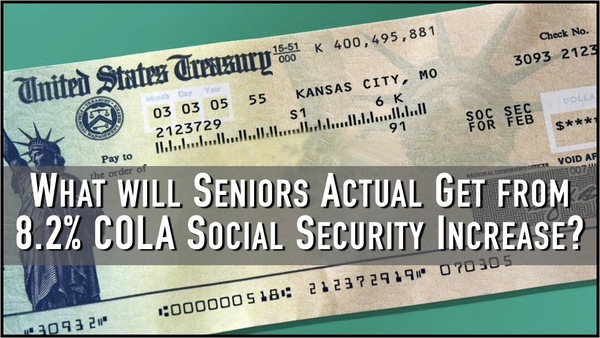 What Does the Increased Social Security Benefit Really Mean?


In 2023, the cost-of-living adjustment (COLA) for Social Security is increasing. As a result, more than 65 million Social Security beneficiaries will receive an 8.7 percent increase in their benefits. That equals roughly $146 for the average Social Security recipient.

But that’s not all that’s going up. Someone has to pay for this increase. How will increasing the Social Security benefits help recipients? And who pays for it?

In 2022, with 8.2 percent inflation, the Social Security benefit COLA was 5.9 percent. Although this seemed low at the time, it was the most increase since the 4.1 percent COLA in 2005.

But the 5.9 percent didn’t look as good when Medicare’s increase was factored into the equation. Medicare’s premium increased by 14.5 percent. This was the largest increase in its history.

What are the actual numbers, and how did these affect Americans’ benefits?

Meanwhile, if you were receiving Social Security benefits of $2,000 per month, that 5.9 percent COLA would have given you an additional $118 per month—a $2,118 monthly total. Accounting for the increase in Medicare, you would have received an additional $52.10 per month.

Now, take inflation into account: that knocked off an additional $4.27 of the increase. So, in reality, for that $2,000 monthly benefit, you received an increase of $47.83.

These are general numbers, but you probably get the point.


The COLA for Social Security began in 1975. It is based on fluctuations in inflation according to the Consumer Price Index for Urban Wage Earners and Clerical Workers (CPI-W). The Social Security Administration takes each month in the third quarter’s inflation rate and compares it to the same time the previous year.

The COLA helps protect retirees from truly living on a fixed income since they receive some increases in their income.

The increase will appear in your January 2023 check.

The Medicare Part B premium also increased in 2022. The explanation was to pay for a high-priced Alzheimer’s drug, Aduhelm, that was new on the market. But there have been changes in the drug’s use and price. Other Part B services and items also came in lower than expected. According to the Centers for Medicare and Medicaid Services (CMS), this resulted in large reserves in the Part B account.

The result is that the Medicare Part B premium will decrease by $5.20 monthly.

The CMS estimates that approximately 7 percent of Medicare recipients pay this amount.

Working Americans pay 6.20 percent for Social Security payroll tax. They pay and additional 1.45 percent for Medicare. Their employers match the combined rate with an additional 7.65 percent. The self-employed are required to pay 15.30 percent.

CLICK HERE TO READ MORE ON THE EPOCH TIMES