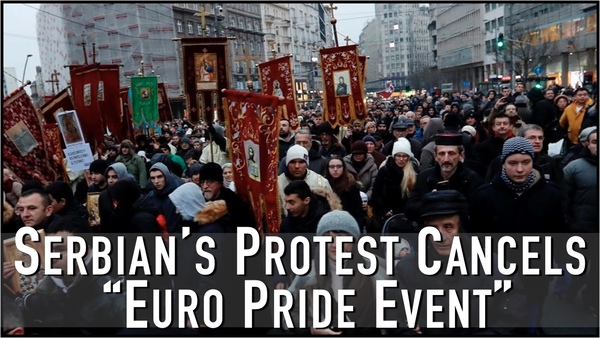 'Pride' Event Canceled as Serbians March in Defense of Christian Values: 'We Don't Give Up Holy Places'

These days, it is often considered tantamount to professing allegiance to Nazi ideology to openly oppose homosexuality as a matter of Christian conviction.

This vitriol towards basic Christian sexual ethics and cultural values has caused many a believer to cower apologetically or even downright support LGBT lifestyles to avoid being branded as “hateful.”

Even the most right-wing conservatives often pour their energy into defending their views and trying to make them more palatable to the secular left according to the left’s own values.

I’ve expended quite a lot of breath on this subject myself, but the truth is, it is far too easy to become overly concerned with the opinion of man while forgetting the exponentially more important fear of the Lord.

Truth be told, to conscience-bound Christians, it doesn’t matter what the world thinks of our loyalty to God — it only matters that we have loyalty to God, and boldly and shamelessly so.

So I believe we have something to admire in the thousands of Serbian Christians who protested against a massive LGBT “pride” event planned in their country — Christians who were not afraid to boldly declare that “we don’t give up holy places,” as one sign professed.

The protest was held in the Balkan country’s capital of Belgrade on Sunday and organized by opponents of a “Euro Pride” event that was scheduled to take place in the city in September.

Reuters reported that thousands turned up, led by members of the Serbian Orthodox Church, whose bishops are calling for the event to be banned.

The outlet noted that the day before, Serbian President Aleksandar Vucic had said Euro Pride, which is held every year in a different European city, will be postponed or canceled.

Still adamant as to the threat to traditional values that the LGBT movement poses in their country, protesters carried signs saying “Keep your hands off our children” and “We don’t want a gay parade and occupation by the West,” according to Balkan Insight.

All “far-right” Serbian political parties have reportedly condemned Euro Pride, and the now-suspended event has been the subject of scathing remarks from Bishop Nikanor of Banat, who stated this month that the “pride” attendees would “flaunt and desecrate the city of Belgrade, the holy Serbian city.”

“I will curse all those who organize and participate in something like that,” he reportedly said, going as far as to declare, “If I had a weapon, I would use it. I would use that force if only I had it, but I do not.”

Now, something many Americans don’t understand is the cultural complexities of Eastern European loyalties and where they might lie after the tumultuous last two centuries.

And so we certainly don’t need to support everything these Serbians stand for — Reuters noted a marked presence of pro-Russia sentiment, for example, and we cannot wholeheartedly condone the outraged bishop’s desire to use a weapon to prevent the “pride” event from taking place.

What is not difficult to understand, however, whether you are discussing Serbia or other nations such as those in Africa and Latin America, is the sick and twisted ideological colonialism coming out of Western Europe and the U.S., imposing progressive, atheistic values upon traditional, Christian cultures.

The United Nations, the European Union and the government of the United States are often accused of attaching promises of aid to the aggressive advancement of progressive priorities like abortion and LGBT “rights.”

Serbia is currently a candidate to join the EU. Reuters reported that the country will have to “improve the rule of law and its human and minority rights record” to make the cut, so banning “pride” parades is likely out if it hopes to join the enlightened West in this regard.

Meanwhile, Western Christians have stood by, afraid of being termed hateful, old-world bigots for opposing LGBT ideology in our own “advanced” countries.

Christianity spread around the world across centuries and brought with it unprecedented advancements in education, human rights, and dignity for women and children.

As the fear of God has been systematically dismantled, so have these critical social advancements and the values of universal liberty that could have only originated in a profound regard for the Creator of mankind.

It is high time we stop being afraid of whom we’ll offend when we stand up for our values — it should concern us much more how many people don’t care about offending God.

So as you watch things like drag shows for children and shamelessly vulgar LGBT “pride” parades become the norm in the U.S., why not ask yourself, sincerely, who it is that you truly fear — God or man?