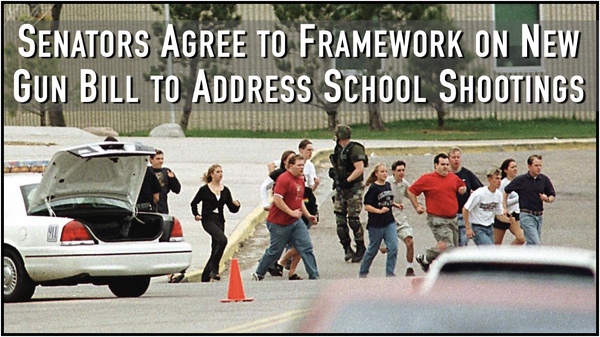 Akron, OH: Today, Tom Zawistowski, President of the national TEA Party-affiliated We the People Convention (WTPC) and Executive Director of the Portage County Ohio TEA Party, called the Senate School Shooting Bill “Framework” totally inadequate for stopping school shootings then demanded that the Senators “fix the problem” instead of play politics. On June 12, 2022 a bi-partisan group of 10 Republican and 10 Democrat Senators agreed to a list of laws they claim will help stop these school and mass shootings. (See article below.)

Zawistowski said, “Many of the things the Senators agreed to, with the exception of the proposed red-flag laws, are positive steps to reducing mass shootings, particularly enhanced mental health treatment for people showing signs of mental health issues. However, those steps are not what we need to fix the problem. Nothing in their agreement requires states to harden every school building against armed attack, such as single door access to schools and hardened classroom doors that lock from the inside - which just last week stopped a school shooter in Alabama!  Nothing in their agreement requires states to fund armed guards in every school. Nothing in their agreement requires states to allow teachers to receive special training and to carry guns in school.”

Zawistowski concluded, “For decades, and particularly since 911, we have used these proven tactics to protect members of Congress, our courts, all government offices, banks, airports, concerts, sporting events, church services, and businesses so why are we NOT protecting our children using the same tactics??? What is missing from that list? SCHOOLS! Stop playing politics and fix the problem! I just spelled out the best answers to ending school shootings. For Congress to not implement those changes now would be a willful act of intentionally leaving America’s children unprotect. Unfortunately the Leftist Democrats don’t want to fix the problem, because their goal is to take guns away from law abiding citizens not protect children. Hopefully, sane members of the US Senate, on both sides, will resist the goals of the marxist radical left and do what is obviously necessary, and no more, to protect our children - NOW!”

Statement on Senate "Framework" from the NRA:

The NRA is committed to real solutions to help stop violence in our communities.  We encourage our elected officials to provide more resources to secure our  schools, fix to our severely broken mental health system and support law enforcement.

As is our policy, the NRA does not take positions on "frameworks".  We will make our position known when the full text of the bill is available for review.

The NRA will continue to oppose any effort to insert gun control policies, initiatives that override constitutional due process protections and efforts to deprive law-abiding citizens of their fundamental right to protect themselves and their loved ones into this or any other legislation.

While Senate Group Announces "framework" for a new Gun Bill - NOTHING is in writing so the details are not known!

A bipartisan group of senators on June 12 announced a legislative package of gun control measures that include more resources for mental health needs, school safety, and more.

The proposal has the support of 10 Republican senators, which is needed in the 50–50 Senate to overcome any legislative filibuster. It was praised, notably, by Senate Majority Leader Chuck Schumer (D-N.Y.), a longtime proponent of gun control measures.

The plan calls for an “enhanced review process” for younger gun buyers.

“For buyers under 21 years of age, requires an investigative period to review juvenile and mental health records, including checks with state databases and local law enforcement,” according to their statement.

Notably, the framework bill includes a so-called red flag provision, allowing for “resources to states and tribes to create and administer laws that help ensure deadly weapons are kept out of the hands of individuals whom a court has determined to be a significant danger to themselves or others,” according to a June 12 statement by the group.

Currently, 19 states and Washington, D.C., have red flag laws on the books, which have been described as unconstitutional because they violate the Constitution’s due process clause and give too much power to judges.

In the statement, the group said its plan “increases needed mental health resources, improves school safety and support for students, and helps ensure dangerous criminals and those who are adjudicated as mentally ill can’t purchase weapons.”

Click Here to contact YOUR Senators TODAY and tell them to Fix this Flawed Framework and protect our children!

Murphy and Cornyn had been tapped by Schumer and Senate Minority Leader Mitch McConnell (R-Ky.), respectively, to come to a deal following several high-profile mass shootings in recent weeks. The Republicans who announced their support for the measure likely will face blowback from other GOP lawmakers and some of their constituents.

There was no mention of more controversial provisions that have been proposed by some Democrats, including unilateral bans on semi-automatic rifles or bans on magazines that hold more than 10 rounds.

“Today, we are announcing a commonsense, bipartisan proposal to protect America’s children, keep our schools safe, and reduce the threat of violence across our country,” Murphy, Cornyn, and other senators said in the statement. “Families are scared, and it is our duty to come together and get something done that will help restore their sense of safety and security in their communities.”

Schumer, in a statement, praised the deal and said that “Congress is on the path to take meaningful action to address gun violence,” without mentioning that some cities with significant gun control laws have some of the highest firearm-related homicide rates in the United States.

“After an unrelenting wave of gun-related suicides and homicides, including mass shootings, the Senate is poised to act on commonsense reforms to protect Americans where they live, where they shop, and where they learn,” he added. “We must move swiftly to advance this legislation because if a single life can be saved, it is worth the effort.”


READ MORE ABOUT THIS STORY AT THE EPOCH TIMES