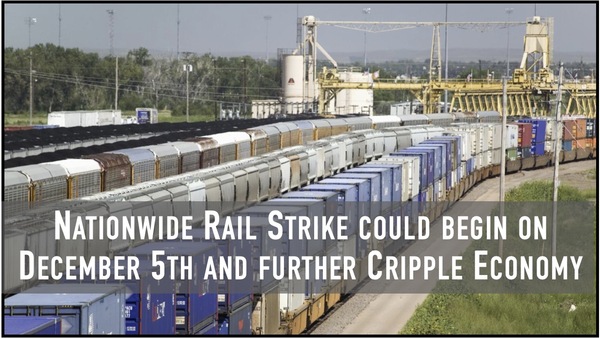 A nationwide Rail Strike could come as soon as Dec. 5 . . . with Congress expected to intervene. . .


Members of the country's largest rail union on Monday rejected a proposed labor contract with freight railroads, resulting in a potential nationwide freight-rail strike amid the holiday season and Congress likely intervening to avert such a shutdown.

The other union, the nation's second-largest rail union, which represents engineers, ratified its own contract, according to CNN. But the deal alone will not avert a strike, which could begin as soon as Dec. 5, raising concerns about further disruptions of the U.S. supply chain and exacerbating already high inflation.

Congressional lawmakers would have to move quickly to avert a strike, considering they won’t return from Thanksgiving recess until at least Nov. 28.

The work stoppage would impact coal shipments, passenger rail service and cost the U.S. economy billions of dollars per day, according to Politico.

Click Here to Watch the Newest We the People Convention News & Opinion Podcasts!

All 12 unions have to agree to the contract, and if just one fails to sign it, none of the others would cross a picket line, which would likely trigger an industry-wide strike.

Three of the unions in September rejected a proposed contract agreement brokered by Labor Secretary Marty Walsh – over such lingering issues including sick leave.

The unions could be at a disadvantage if the negotiations extend into January, because Republicans, who will then control the House, say they’ll impose recommendations made in August by a board appointed by President Biden that didn’t improve working conditions to the extent unions wanted, Politico also reports.

READ MORE AT JUST THE NEWS.COM