Push for DeSantis is Really an Attack on MAGA 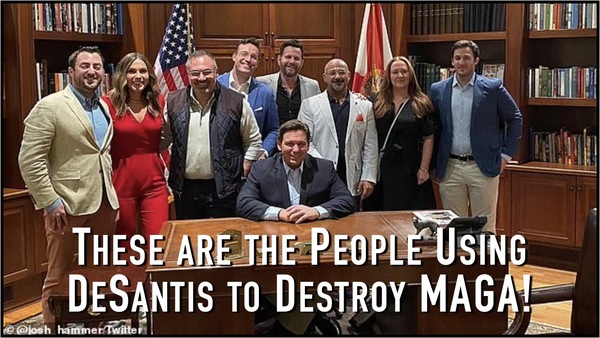 President Trump fires back against Ron DeSantis who is being Used by the Deep State and Ruling Class to Destroy MAGA and protect their control over YOU!

President Trump can see and hear the same things everyone else can see and hear, including the coordinated media and GOPe effort to diminish him and the MAGA movement within the Republican club.

The Democrats and professional Republican class both want to see the populist movement destroyed for the same reason Mitch McConnell wanted the Tea Party destroyed in 2010.  The assembly of the united middle-class and blue-collar base inside the Republican Party, essentially the broad MAGA movement, represents a Main Street threat to Wall Street control of the GOPe.

There are trillions at stake.

As Florida Governor Ron DeSantis’ megadonor and Citadel hedge fund billionaire, Ken Griffin, openly admitted recently the Wall Street goals are (1) stop the populist movement and (2) get the Republican Party back in alignment with the multinational “corporate world.”  These are the same goals of the Republican leadership in Washington DC and the same goals as the corporate media who serve as the public relations firms for Wall Street.

The collaborative group, which includes the entirety of the funding mechanism and management behind Ron DeSantis, viewed the 2022 midterm election as an opportunity to reset the Republican Party away from the populist MAGA influence.  The strategy was to roll out of the August DOJ Mar-a-Lago targeting, directly into a nationally rebranded DeSantis operation and then lead up to the 2022 midterm election.

Anything that can cast Donald Trump as a negative would be enhanced, and anything that would cast the MAGA movement as a positive would be diminished.  In part, this is the intent behind the delayed positive election results from key MAGA races in CO, WA, NV and AZ, combined with emphasis on the negative -albeit controlled- election ballot outcomes from Michigan and Pennsylvania.

The professional political class, both DNC and RNC club members, politicians and donors, want to get back to normal political business operations in Washington DC.  The key element at the core of their concern is financial and economic control.  Again, there are trillions at stake. 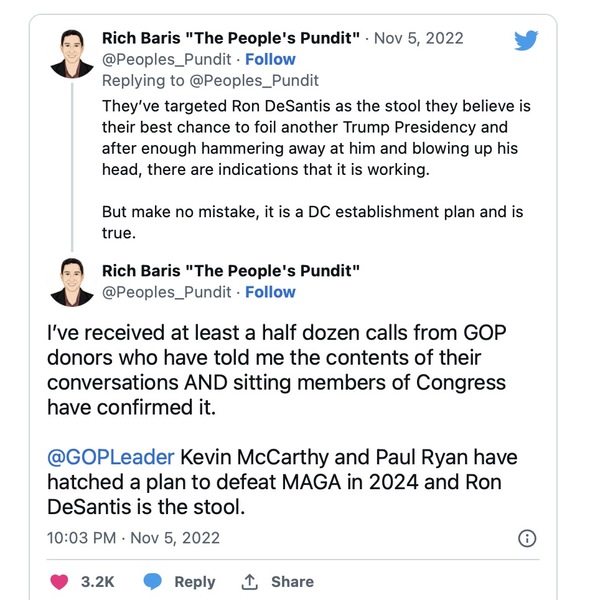 Just like we can see this coordinated effort, so too can President Trump see the construct of the narrative as it is being engineered and delivered.  We can see the Paul Ryan wing, the Mitch McConnell wing and the corporate media division all working in concert.  The entities described genuinely do not think the larger Republican base can see it, but they underestimate us at their own peril.

Things are never going to return to normal for them, but they refuse to accept that.  The most adamant of the professional Republican apparatus, in concert with the multinational financial world, would rather see the GOP lose every election – if that’s what it takes to stop the MAGA movement.  They view this as a zero-sum game, and they have planted proactive seeds for exactly this purpose.

The are more than happy to assist CONservative Inc new media apparatus, the “influencers” as they call them, are part of the dynamic that was recruited in early 2022 {See Here}. It’s the use of this crew and others of like-minded disposition that helps the corporate group drumbeat an anti-populist, anti-MAGA message with the intention to eliminate the head of the movement.

In addition to their common vertical challenges, the DeSantis 2024 influence group are almost identical to the Cruz 2016 group.  The difference this time around is the pretending game; where they pretend DeSantis is not the intended beneficiary of their relentless anti-Trumpism in both print and broadcast appearances.

Florida Governor Ron DeSantis has been positioned as the intended recipient for the disenfranchised MAGA movement’s support, if they can just get President Trump out of the equation and exploit the vulnerability in his absence.  However, all previous efforts to shake the bond between President Trump and the MAGA movement have failed.

Using the 2022 midterm election control, they are pounding the wedge harder now, with increased ferocity and urgency to break the bond.

Click Here to Read the Case for a Trump-DeSantis Ticket in 2024!

Just like in 2016, the GOPe multinationals, corporatists, Wall Street donors, Never Trump CONservatives, and just about all controlled media systems are being enlisted in this effort.  President Trump can see the construct just as clearly as you can.

That’s why President Trump is hitting back against the effort by singling out the wedge they are trying to use.

CLICK HERE TO READ MORE AT THE CONSERVATIVE TREEHOUSE.COM