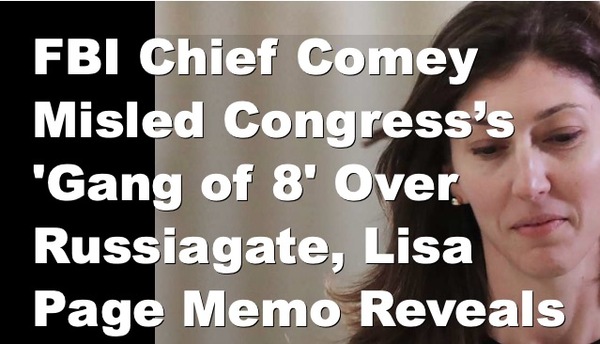 The FBI deceived the House, Senate and the Justice Department about the substance and strength of evidence undergirding its counterintelligence investigation of President Trump, according to a recently declassified document and other material.

A seven-page internal FBI memo dated March 8, 2017, shows that "talking points" prepared for then-FBI Director James Comey for his meeting the next day with the congressional leadership were riddled with half-truths, outright falsehoods, and critical omissions. Both the Senate and the House opened investigations and held hearings based in part on the misrepresentations made in those FBI briefings, one of which was held in the Senate that morning and the other in the House later that afternoon. RealClearInvestigations reached out to every member of the leadership, sometimes known as the "Gang of Eight." Some declined to comment, while others did not respond to queries.

The talking points were prepared by Lisa Page, a senior FBI lawyer who later resigned from the bureau amid accusations of anti-Trump bias, and were used by Comey in his meeting with Hill leaders. They described reports the FBI received in 2016 from "a former FBI CHS," or confidential human source, about former Trump campaign officials Paul Manafort and Carter Page (no relation to Lisa Page) allegedly conspiring with the Kremlin to hack the election.

Quoting from the reports, Comey told congressional leaders that the unidentified informant told the FBI that Manafort "initially 'managed' the relationship between Russian government officials and the Trump campaign, using Carter Page as an intermediary." He also told them that "Page was reported to have had 'secret meetings' in early July 2016 with a named individual in Russia's presidential administration during which they discussed Russia's release of damaging information on Hillary Clinton in exchange for alterations to the GOP platform regarding U.S. policy towards Ukraine."

But previous FBI interviews with Carter Page and other key sources indicated that none of that was true – and the FBI knew it at the time of the congressional briefings.

The Lisa Page memo anticipated concerns about the quality of information Comey was relaying to Congress and suggested he preempt any concerns with another untruth. The memo advised Comey to tell lawmakers that "some" of the reporting "has been corroborated," and to point out that the informant's "reporting in this matter is derived primarily from a Russian-based source," which made it sound more credible.

By this point, however, the FBI knew that the main source feeding unsubstantiated rumors to the informant, Christopher Steele, a former British intelligence agent paid by Hillary Clinton's campaign to dig up dirt on Trump, was American-based.

The FBI first interviewed that source – a Russian national named Igor Danchenko who was living in the U.S. and had worked at the Brookings Institution – in January 2017. Danchenko had told them that the anti-Trump dirt he funneled to Steele was dubious hearsay passed along over drinks with his high school buddies and an old girlfriend named Olga Galkina, who had made up the accusations about Carter Page and Manafort that the FBI relayed to Congress.

Click Here to Read the Remainder of this Story at Real Clear Investigation.com