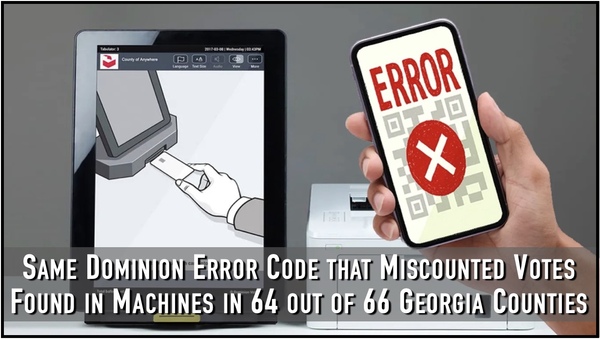 
by KanekoaTheGreat, via Substack, October 4, 2022

The "Tennessee Error" is an “anomaly” discovered on Dominion’s Image Cast Precinct (ICP) Tabulators (also referred to as "scanners") that occurred during a Williamson County election held on October 26, 2021.

The Election Assistance Commission (EAC) defines an anomaly as "an irregular or inconsistent action or response from the voting system or the system component, which resulted in the system or component not functioning as intended or expected."

In Williamson County, an election worker tallying votes on a post-it note realized that hundreds of ballots removed from a tabulator did not get counted.

Even though that tabulator never signaled that a problem occurred.

After further investigation, election officials realized that the anomaly caused 7 out of 18 tabulators to miscount ballots.

The State of Tennessee, the EAC, and the two accredited entities that test voting machines, Pro V&V and SLI Compliance, investigated the anomaly and were able to repeat the problem but were "not able to determine the root cause of the anomaly.”

The federal government and the state could not determine the cause of the problem, so they brought in Dominion Voting Systems to investigate why their tabulators were miscounting ballots.

On February 11, 2022, Dominion submitted a Root Cause Analysis (RCA) report to the EAC.

On March 31, 2022, the EAC released a report on the “Tennessee Error” entitled, “Dominion Voting Systems D-Suite 5.5-B”, which incredibly states “the direct cause of the anomaly was inconclusive” and “erroneous code is present in the EAC certified D-Suite 5.5-B and D-Suite 5.5-C systems.”

In essence, the EAC and Dominion admit they do not know the cause of the problem, and there is no explanation or definition of the “erroneous code”, nor how it got there after the software was certified by the EAC.

The report continues, "analysis of audit log information revealed entries that coincided with the manifestation of the anomaly; a security error “QR code signature mismatch” and a warning message “Ballot format or id is unrecognizable” indicating a QR code misread occurred. When these events were logged, the ballot was rejected."

In other words, as the Election Oversight Group explains:

"Investigators reviewed the system log (SLOG) files (it’s just a diary the scanner keeps of the election), and it showed multiple instances of an error called a “QR code signature mismatch” with a warning message of  “Ballot format or id is unrecognizable.” Testers noticed that the machines counted the votes properly until the error was triggered. After the error was triggered, the current ballot in the machine was not counted, and every ballot after it was not counted - until the machine was reset."

The U.S. government report explains that Dominion’s tabulator marked all of these uncounted ballots as "provisional" even though tabulators typically do not scan provisional ballots, which are customarily hand-marked paper ballots that are placed in an envelope and addressed by election officials after the polls close.

Furthermore, according to Moncla, the uncounted ballot images “were in a provisional folder that was hidden from the tabulator's count and the poll closing tape.”

“In other words, the tabulator didn’t reflect their existence anywhere.”

After the EAC report was released, Cross and Moncla asked EAC Director Jonathan Panek if the government found the anomaly in other states or counties.

The EAC Director who authored the “Tennessee Error” report replied, “no additional reports were received.”

Cross and Moncla then placed open records requests for SLOG files from all 159 Georgia counties, only to be “unlawfully blocked and significantly delayed” by Ryan Germany from the Secretary of State’s office.

The two volunteers behind the Election Oversight Group had to file a complaint with the Inspector General to force Mr. Germany to comply and have so far only received the SLOG files from 66 counties.

Incredibly, 64 of 66 or 97% of Georgia’s counties have the same “Tennessee Error” that Dominion Voting Systems and the U.S. government already investigated and admitted they do not know the cause.

For example, 107 instances of the security error “QR code signature mismatch” and the warning message “Ballot format or id is unrecognizable” show up in Chatham County’s SLOG files during the recent 2022 primary election.

In Gwinnett County, during the 2020 primary election, there are 84 instances of the same “Tennessee Error.”

Cross and Moncla say, “our work indicates the precinct scanners in Georgia have not counted ballots accurately since they were first installed” in 2020.

The Election Oversight Group, whose stated mission is “to protect & secure our elections,” have filed an “Official Notice and Demand for Emergency Review” with Georgia’s State Election Board that seeks intervention in the 2022 mid-term elections.

READ MORE AND SEE SCREEN SHOTS AT KanekoaTheGreat ON SUBSTACK!