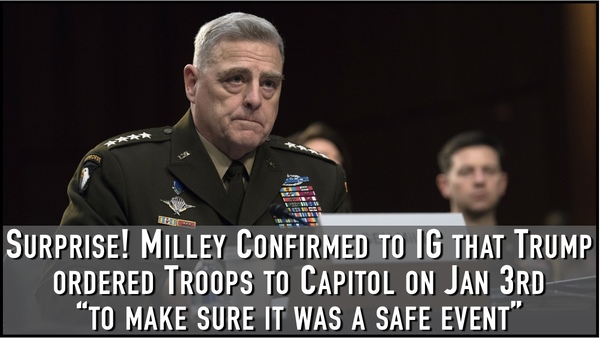 The Jan 6th Commission Phony "investigation" of Jan 6th and Trump's Involvement Got BLOWN UP Today with the release of this Defense Department IG Memo Exonerating Trump!

Throughout the summer, Democrats have argued that Trump intended and eventually succeeded in inciting the violence on Jan. 6. "The select committee has found evidence about a lot more than incitement here, and we're gonna be laying out the evidence about all of the actors who were pivotal to what took place on Jan. 6," Rep. Jamie Raskin (D-Md.) said at outset of the hearings.

But the hearings have been undercut by a fundamental fact: Trump's actions before the riot began included urging supporters to "peacefully and patriotically" express their opinions and ordering his top aides to ensure there was a large contingent of National Guard troops at the ready to ensure no trouble ensued.

A Capitol Police timeline obtained by Just the News shows the Trump Pentagon first offered National Guard troops to the Capitol Police on Jan. 2, 2021, four full days before the event. The police turned down the offer but then began to have second thoughts. The Capitol Police then asked their political minders — the House sergeant at arms chief among them — for permission to accept the troops on Jan. 4 but were turned down on the ground that such a show of force would create bad "optics," the records show.

But the most compelling piece of evidence that Trump wanted to thwart — rather than incite —violence is contained in a lengthy memo written by the Pentagon inspector general that chronicled the assistance the Defense Department offered Congress both ahead of and during the riot.

In it, the IG recounts a fateful meeting on Jan. 3, 2021 in the White House when then-acting Defense Secretary Christopher Miller and Gen. Mark Milley, chairman of the Joint Chiefs of Staff, met with Trump on national security matters.

The complete passage — hardly mentioned by Democrats at the hearings or the news media covering them — is worth absorbing in its entirety.

"Mr. Miller and GEN Milley met with the President at the White House at 5:30 p.m.," the IG reported. "The primary topic they discussed was unrelated to the scheduled rally. GEN Milley told us that at the end of the meeting, the President told Mr. Miller that there would be a large number of protestors on January 6, 2021, and Mr. Miller should ensure sufficient National Guard or Soldiers would be there to make sure it was a safe event. Gen Milley told us that Mr. Miller responded, 'We've got a plan and we've got it covered.'"

You can read that full memo HERE

In advance of the Jan. 6 rally, the president told the most senior civilian and uniformed leaders of the military he knew the event was going to draw a "large number of protestors," and he instructed the secretary of defense to ensure it was "safe" by having troops available. Democrats have not offered any evidence to counter that story.

The Pentagon memo also yields insight into the mindset of the Democrat-led Congress, top military officials and the local police before Jan. 6. Key players, it reveals, repeatedly raised concerns about accepting the offer of National Guard help, fearing it would create the perception of a military coup or martial law as the election results were certified.

Army Secretary Ryan McCarthy told the IG "he did not want to create the perception that the military was involved in the electoral process," according to the memo. "He said that Mr. Miller made it clear that the military would not be involved in certifying the election results and that 10 different news agencies asked him about military use and martial law."

District of Columbia Police Chief Robert Contee also opposed having National Guard troops, but for a different reason. "Chief Contee explained to us that he did not want other Federal law enforcement involved on January 6, 2021, because of the risk associated with having unidentified Federal officers carrying weapons within D.C," the memo recorded.

Despite the warnings, the president’s offer of troops wasn’t accepted and the Capitol Police did not take a security posture on Jan. 6 commensurate with the threats.

To date, the House committee investigating Jan. 6 hasn’t provided a complete explanation why.


READ MORE OF THIS ARTICLE AND MORE NEWS AT JUST THE NEWS.COM