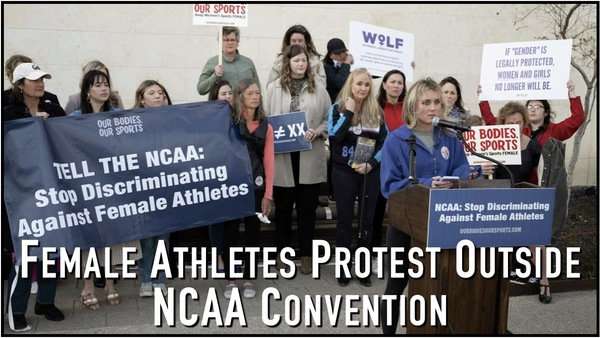 The petition was delivered after the “Our Body, Our Sports” rally Thursday morning in San Antonio, Texas, during the NCAA’s annual convention. The petition demanded that the NCAA commit to single-sex athletic teams and “keep women’s sports female.”

“In the world of college sports, it is impossible to provide equal opportunities for both sexes without single-sex teams. Allowing biological males on women’s teams discriminates against female athletes,” the petition reads. “The NCAA is not above the law. We demand that the NCAA stop discriminating against women and establish rules to keep women’s sports female.”

The push to restrict eligibility in collegiate sports came after former University of Pennsylvania transgender swimmer Lia Thomas won a national title during the 2022 NCAA Women’s Swimming Championship to end Thomas’ record-breaking season, despite having previously competed on the men’s team. Additionally, President Joe Biden’s administration is currently considering expanding Title IX of the Education Amendments of 1972, which prohibits sex-based discrimination, to include gender identity.

At the protest, Alliance Defending Freedom attorney Christiana Kiefer said the NCAA is violating Title IX, the landmark gender equity legislation enacted in 1972, and legal action against the NCAA could take several forms.

The rally was held between 9 a.m and 11 a.m and featured over a dozen speakers including current and former collegiate athletes and state representatives.

“I want to show the NCAA their discrimination against female athletes like me does not go unnoticed. I will not stand by as they allow biological men to take over female athletics,” Macy Petty, a Lee University volleyball player who competed against a biological male during USA Volleyball junior qualifiers, told the DCNF. “I stand with women across the country who demand they put policies in place that protect female athletes and promote fair competition.”

“[Texas Values] will be the leading organization to make sure that our state law is clear that men cannot compete in women’s sports, and if the NCAA is going to take their national convention in our home state of Texas then we want them to discuss sports on our terms and that’s making sure that sports are fair and are upholding Title IX rights,” Mary Elizabeth Castle, Texas Values director of government relations, told the DCNF.

“Macy and many other young female athletes have lost their trophies, their scholarships, and their opportunities to advance in their sports because of the NCAA’s pathetic policies,” Penny Nance, CEO and president of CWA, said in a press release provided to the DCNF.

Gaines expressed a similar concern, telling the DCNF that the rally was “powerful” because it included “people who are actively losing opportunities,” “people who had to fight for their opportunities” and “girls who, quite frankly, won’t get the same opportunities” if men are permitted to compete as women.

Marshi Smith, a former University of Arizona swimmer and ICONS co-founder, told the DCNF they “want to send a message to the NCAA that we are mobilizing to defend the rights of women and girls.”

“We are thousands of athletes strong and we stand alongside parents, lawmakers and organizations on both sides of the political spectrum,” she said. “The NCAA has adopted discriminatory policies and broken the law, intentionally and knowingly harming women and girls.”

Smith said that they intend to send a legal demand letter to the NCAA to repeal rules which permit men in women’s sports, and said they will “call on our leaders to prioritize the sex-based rights and respect of female athletes now.”

In December, the NCAA announced that former Republican Gov. Charlie Baker of Massachusetts would step in as president in March. Gaines said that she is hopeful about the transition and hopes to see the NCAA implement policies that are “fair to everyone, inclusive to everyone, but would prioritize fairness in women’s sports like it should be and like it was intended to be back when they created Title IX in the 1970s.”

State Rep. Valoree Swanson of Texas also spoke at the rally. Swanson sponsored House Bill 23, which is expected to be considered during the 2023 legislative session, to safeguard women’s sports at the college level.

The first “Our Bodies, Our Sports” rally was held on June 23, the 50-year anniversary of Title IX, in Washington, D.C. While Thursday’s rally focused on collegiate athletics, the summer event targeted “women’s sports as a whole,” Meghan Agostinelli, IWF’s communication manager, told the DCNF.