Fed's Clear out DC Jail but Not for Jan 6th Prisoners 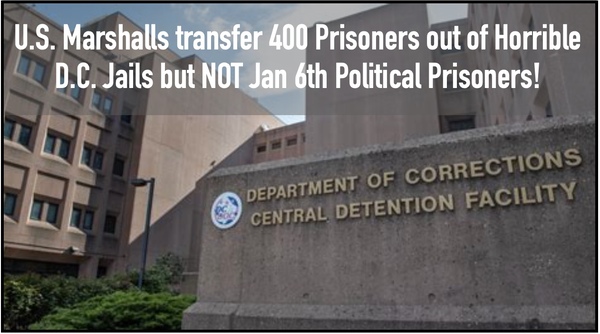 Feds transfer 400 prisoners from main D.C. jail due to conditions, following complaints from Jan. 6 defendants, but they are not among those being moved!


Share this story with your Republican Congressman and DEMAND that they contact the U.S. Marshall's to get the Jan 6th Political Prisoners moved!

UPDATE: Jail ordered U.S. Marshalls to leave so they could not inspect the January 6th Political Prisoner Areas of the Jail!

A slew of complaints about the treatment of jailed defendants in the Jan. 6 storming of the Capitol appears to have triggered a review that led to about 400 federal prisoners being transferred out of the D.C. Central Detention Facility. But those accused of participating in the Capitol riot are not among them.

The U.S. Marshals Service announced on Tuesday that it had conducted an “unannounced inspection” of District of Columbia Department of Corrections facilities two weeks ago and determined that one of the complexes — the main jail — did not meet federal standards.

“The USMS inspection was prompted by recent and historical concerns raised regarding conditions at the DC DOC facilities, including those recently raised by various members of the judiciary,” the Marshals Service said in a statement. “The U.S. Marshal’s inspection of [the Central Detention Facility] revealed that conditions there do not meet the minimum standards of confinement as prescribed by the Federal Performance-Based Detention Standards.”

The approximately 400 prisoners — all pretrial detainees — are being moved to the federal penitentiary in Lewisburg, Pa., the Marshals Service said.

The statement did not elaborate on how the D.C. jail facility fell short, but said federal officials would work with D.C. officials to rectify the problems.

The decision seems not to provide any immediate relief for dozens of Jan. 6-related defendants who are being held pending trial in D.C., because those individuals are being held at the Correctional Treatment Facility, which is used as a medical center for the D.C. jail system and also sometimes for prisoners being isolated from the general population.

Capitol riot suspects have complained about being the target of harassment and intimidation by jail guards and, in at least one case, a beating. Some say they’re viewed as white supremacists by the employees at the jail and have become targets for abuse as a result.

Christopher Geldart, D.C. deputy mayor for public safety and justice, said on Tuesday night that the D.C. government was committed to addressing the shortcomings identified by the Marshals Service. He objected, however, to moving those prisoners who are D.C. residents out of state.

“The charge and mission of the DC Department of Corrections (DOC) is to provide a safe, orderly and humane environment for the men and women under our supervised detention,” Geldart said in a statement. “We regularly work on structural repairs to the aging detention facility; however, the allegations in the summary letter from the Acting U.S. Marshal are deeply concerning.”

“We are working with our federal partners to get the complete report in order to work through the specific findings, and we have also asked the Corrections Information Council for their latest inspection reports,” Geldart added. “We take seriously the responsibility of caring for justice-involved DC residents and believe they should remain in DC. DOC leadership is evaluating moving inmates within the facility so that issues raised can be addressed efficiently and expeditiously.”

A prosecutor confirmed in a court filing on Tuesday that the relevant materials had been passed to the Civil Rights Division as the judge ordered.

The riot suspects and their attorneys have also complained for months that the jail’s facilities are inadequate for video meetings with their clients and for the review of voluminous electronic evidence, like tens of thousands of hours of surveillance, body-worn camera and cellphone video related to the Jan. 6 violence at the Capitol.

Judges have endorsed some of those objections, grousing publicly on several occasions that jail officials reduced the number of video rooms for detainees, effectively constraining the court’s ability to hold hearings for many detainees.

The vast majority of the more than 700 people charged in connection with the Jan. 6 attack on the Capitol building have been permitted to await trial in home detention or on release. More than 100 defendants have pleaded guilty or indicated plans to do so.