Florida is State Where Woke goes to Die! 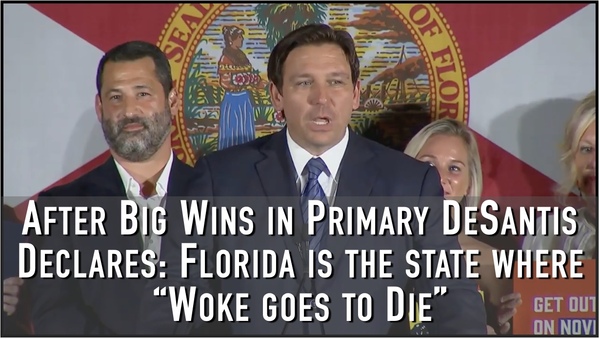 DeSantis-backed candidates flip Florida school board from liberal to conservative

HIALEAH, FLA. – Florida Gov. Ron DeSantis declared victory against the left when it comes to education, celebrating Republicans' school board wins on the state's primary day.

DeSantis, addressing a crowd at a Florida GOP event in Hialeah, Fla., noted that because he, Attorney General Ashley Moody, and Sen. Marco Rubio ran unopposed, the party was able to focus on other races like school board positions. As a result, he said, conservatives won races all over the state, including flipping the Sarasota school board.

"Parents are sick of the nonsense when it comes to education," DeSantis said. "We want the schools to educate kids, we are sick of the indoctrination. We want to make sure that they’re teaching them the basics, teaching them to read, write, add, subtract all the important subjects, not trying to jam woke gender ideology down their throat, not trying to do divisive rhetoric like CRT that's teaching kids to hate each other and hate our country."

"We want true education and parents want to play a role in the schools," DeSantis said Tuesday. "We believe in a parent's bill of rights. We believe that parents have a fundamental role in the education and upbringing of their kids. And as long as I'm governor, the state of Florida is going to be standing with the parents throughout this state."


Conservatives across the state of Florida celebrated on Tuesday night after control of the Sarasota County School Board shifted from liberal to conservative.

Bridget Ziegler, Robyn Marinelli, and Timothy Enos were all endorsed by Florida Republican Gov. Ron DeSantis and were all victorious Tuesday night in their elections for the Sarasota School board.

Various conservatives in the state touted the victories and suggested they represented a shift against Critical Race Theory and other "woke" policies that DeSantis and Republicans in Florida have railed against. 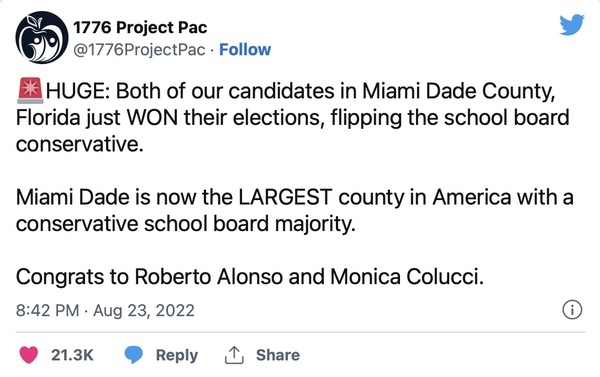 Source: FoxNews
FL Where Woke Goes to Die by Tom Zawistowski is licensed under N/A N/A