The FBI's Actions have Ruined it's Reputation 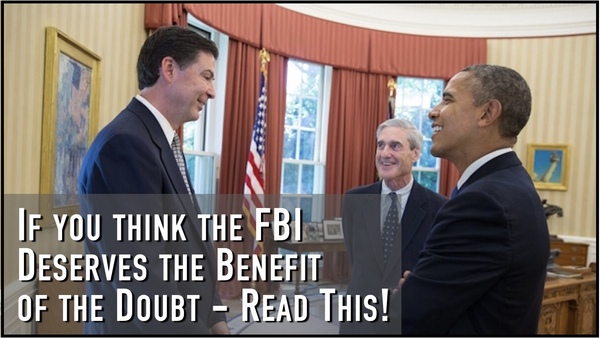 A look at the FBI’s last six years shows a pattern of Irredeemable Corruption.

Can the FBI be trusted? A Federalist analysis of agency lies over the last decade is an unequivocal no.
(Each Section Here is Summarized - Click Here to Read the Full Article at The Federalists!)

Not one of the four FISA warrants obtained by the FBI was legally justified, according to DOJ Inspector General Michael Horowitz’s report. In fact, at least two of the warrant applications to spy on Page were declared illegal by a federal judge. Following Horowitz’s blistering report outlining FBI misconduct throughout the entire operation, another federal judge declared that agency malfeasance “calls into question whether information contained in other FBI applications is reliable.”

“Late July of 2016, the FBI did, in fact, open a counterintelligence investigation into, is it fair to say the Trump campaign or Donald Trump himself?” asked then-Rep. Trey Gowdy, R-S.C., in a 2018 hearing.


Not only was Congress led astray as FBI officials conducted a rogue operation to defend the incumbent regime, but so was senior leadership in President Trump’s DOJ.

Handwritten notes revealed in the Sussmann trial exposed how FBI agents sought to cover up malicious misconduct, wherein DOJ leaders tasked with FBI oversight were misled about the investigation’s progress. The notes show FBI agent Peter Strzok wrongly told DOJ supervisors the surveillance warrant on Page had been “fruitful.” Strzok also concealed knowledge that Steele’s sources were not credible and claimed instead that the dossier was “CROWN reporting” from MI6, the CIA’s British counterpart. The FBI said the dossier was being used to examine the RNC and Trump campaign’s effort to soften the GOP platform on NATO and Crimea for Russian energy stocks, but the document made no mention of NATO or Crimea.

Strzok also said Trump’s 2016 joke about Russia uncovering Clinton’s 30,000 deleted emails triggered Crossfire Hurricane, with an Australian diplomat tipping off the government about Papadopoulos at the American embassy in London. The tip that Papdopoulos was coordinating collusion between the Trump campaign and Russia, however, came before Trump made the joke.


Comey thought the Crossfire Hurricane investigation was important enough to brief outgoing President Barack Obama on the probe but kept Trump in the dark. In fact, Comey later confirmed that he told Trump three times the president was not being investigated and refused to tell him Clinton funded the dossier.


In June 2020, a federal judge ordered that all charges be dropped against Flynn, whom Trump subsequently pardoned in the waning days of his administration. Prior to his exoneration, Flynn was facing heavy fines and prison time for making false statements to federal officials in another perjury trap orchestrated by Comey, who bragged about the setup in the first week of the Trump White House.

“We placed a call to Flynn and said, ‘Hey, we’re sending a couple guys over, hope you’ll talk to them.’ He said ‘sure,'” Comey explained at the 92nd Street Y conference. “Nobody else was there, they interviewed him in a conference room at the White House situation room, and he lied to them.”

Handwritten notes from the FBI agents also revealed the sole purpose of their questioning was “to get him to lie so we can prosecute him or get him fired.” A bizarre 2017 inauguration day email by Susan Rice to herself also revealed Comey knew there was no legitimate reason to question Flynn.


Former FBI Deputy Director Andrew McCabe was fired from his top role at the bureau for lying to the agency inspector general four times over multiple abuses during his tenure in senior leadership.

Those abuses included efforts to set up former White House Chief of Staff Reince Priebus for obstruction charges, the sabotage of an investigation into Clinton emails on Anthony Weiner’s laptop before the 2016 election, and failure to report conflicts of interest. While running for a Virginia state Senate seat in 2015, McCabe’s wife accepted a political donation from a close Clinton ally as her husband was tasked with investigating the former secretary of state.

A 2018 DOJ inspector general report blasted McCabe as a serial leaker who lied about it. That same year, a letter from Grassley shined a spotlight on McCabe’s purchase of a $70,000 table on taxpayers’ dime that the agency sought to cover up.


The FBI repeatedly told journalists there was no evidence that a foreign power had reviewed Clinton’s emails that she improperly handled on a private server. According to an inspector general report in 2018, however, texts show they almost certainly did, “at least one of them classified,” as Federalist Senior Editor David Harsanyi wrote.

“It is more accurate to say,” read a text from Strzok, “that we know foreign actors obtained access to some of her emails (including at least one Secret one) via compromises of the private email accounts of some of her staffers.”


In 2018, Comey told lawmakers over the course of the investigation into Clinton’s emails that agency officials thoroughly reviewed the laptop belonging to Clinton aide Huma Abedin and her now-ex husband Anthony Weiner. The FBI was able to accomplish such a feat within a short timeframe “thanks to the wizardry of our technology” enabling agents who worked “night after night after night” to comb through the remaining material before the 2016 election.

“But virtually none of his account was true,” explained RealClearInvestigations’ Paul Sperry.


In 2019, former Trump associate Roger Stone was raided by the FBI after being indicted by Mueller. A CNN camera crew happened to be the only network present at Stone’s Fort Lauderdale home before the sunrise raid, suggesting the friendly press had been tipped off in advance. The FBI, however, refused to comply with a Federalist open records request for any and all emails to or from CNN on the day of the raid.


The Jan. 6 saga has become the sequel in Democrats’ efforts to indict Trump, before FBI agents hatched a plot to go after the former president over supposed espionage.

In October, the bureau refused to offer House Republicans conducting their own independent investigation of the Capitol riot the same material given to congressional Democrats. The FBI’s refusal, the agency claimed, was because officials were already working with House Speaker Nancy Pelosi’s Select Committee on Jan. 6. Pelosi’s committee, however, was established in violation of House rules. Rep. Jim Banks, R-Ind., the minority appointment as ranking member, is entitled to the documents presented to Democrats.

Senior FBI officials have also refused lawmakers’ questions about how many informants were present at the Capitol on Jan. 6 and stonewalled inquiries surrounding Ray Epps, the mysterious figure who disappeared from the most-wanted list after he encouraged rioters to swarm the Capitol.


The presence of Vice President Mike Pence and then-Sen. Kamala Harris at the U.S. Capitol has been the basis for nearly 800 people being charged with at least one count of violating 18 U.S. Code, section 1752, according to Kelly, which indicates that any building or complex hosting the vice president is a restricted area and therefore closed to the public.

“But the Justice Department recently was forced to admit that Harris was not in the building for most of the day on January 6,” Kelly reported, highlighting that Harris, at the time, remained a U.S. senator, not vice president. In the late morning, Harris was moved to the DNC headquarters where a pipe bomb had supposedly been planted.

“Prosecutors have begun amending language in court filings to reflect the fact Harris was not inside the Capitol despite making the assertion in thousands of charging documents,” Kelly wrote.


The FBI released a joint memo with the Department of Homeland Security warning that “domestic extremists” were preparing to launch an insurrection by overwhelming the Capitol and removing Democratic lawmakers “on or about the 4th of March.”


In October 2020, the FBI revealed that a plot to kidnap Michigan Democrat Gov. Gretchen Whitmer had been heroically foiled by federal law enforcement. A group of far-right militiamen, the story goes, conspired to kidnap the governor and try her as a “tyrant” in Wisconsin. In July last year, however, BuzzFeed revealed that at least12 people involved were FBI informants orchestrating another entrapment.

“The problem with the case is that it appears the FBI, through informants and undercover agents, hatched the kidnapping plot, served in the key leadership positions of the militia group, trained the militia members in military tactics, actively recruited participants, and funded much of the militia’s activities,” reported former CIA Paramilitary Operations Officer Max Morton. “Then, when various members of the Watchman militia became uncomfortable with the kidnapping plot, with several quitting, the FBI’s primary informant pushed the plot along, eventually becoming the militia group’s leader.”

READ THIS FULL ARTICLE AT THE FEDERALIST.COM

Source: The Federalist
FBI Deserves NO Respect by Tom Zawistowski is licensed under N/A N/A