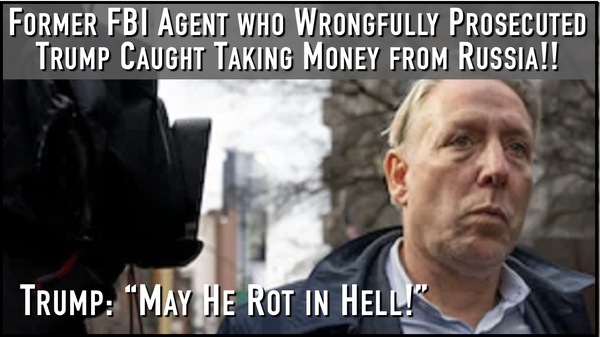 Donald Trump reacted with glee after a former FBI official who was involved in the investigation into the alleged ties between the former president's 2016 campaign team and Russia was arrested.


Charles McGonigal, 54, the former head of counterintelligence for the FBI's New York office, is accused of secretly working for a U.S.-sanctioned Russian oligarch, Oleg Deripaska, as well as conspiring to commit money laundering.

Prosecutors said that McGonigal is alleged to have tried to help Deripaska get off the sanctions list after leaving the FBI in 2018. He is also alleged to have taken money off the Russian billionaire in 2019 in order to investigate a rival oligarch.

McGonigal was one of the first FBI figures to be made aware of allegations that George Papadopoulos, a campaign adviser for Trump, boasted that he knew Russians had dirt on Democrat candidate Hillary Clinton.

In 2019, special counsel Robert Mueller's investigation determined that there was no evidence that Trump and his campaign conspired or coordinated with Russia to interfere in the 2016 election, although the former president and several of his officials may have attempted to obstruct the probe.

Papadopoulos was jailed for 12 days in 2018 after admitting lying to the FBI about his contact with London-based professor Joseph Mifsud, who allegedly claimed to have damaging information on Clinton during the 2016 election campaign.

Deripaska was also a client of Paul Manafort, Trump's former campaign manager who was jailed in 2019 for tax and bank fraud charges in a case that stemmed from Mueller's Russia investigation.

The Department of Justice said McGonigal and Shestakov were aware that conspiring to work with Deripaska violated U.S. sanctions, especially as McGonigal would have received classified information that Deripaska would be added to a list of sanctioned oligarchs.

Deripaska was sanctioned by the U.S. in 2018 for his apparent ties to the Russian government and Russia's energy sector amid Moscow's ongoing threats to Ukraine.

McGonigal is charged with concealing material facts, six counts of making false statements and two counts of falsification of records and documents.

In a separate indictment, McGonigal is also charged with accepting $225,000 while working at the FBI from a person who had business interests in Europe who had been an employee of Albania's foreign intelligence service.

He pleaded not guilty to the charges during a court appearance in New York on Monday.

CLICK HERE TO REAM MORE ON THIS STORY AT NEWSWEEK.COM

Source: NEWSWEEK.COM
Rot in Hell by Tom Zawistowski is licensed under N/A N/A