DeSantis Shows Other Republicans How it's Done! 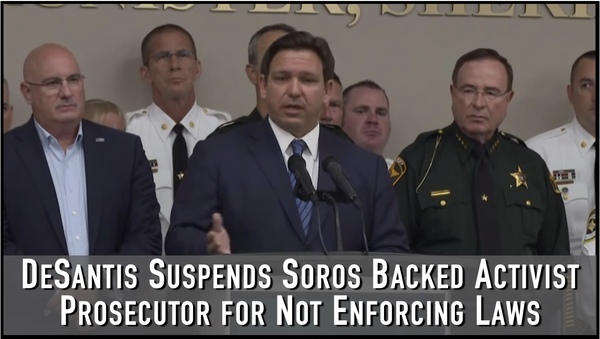 
by Sundance, The Conservative Treehouse, August 4, 2022

Under the Florida constitution the Governor has the authority to suspend state officials for reasons of misfeasance, malfeasance, neglect of duty, drunkenness, incompetence, permanent inability to perform official duties, or commission of a felony. The Governor has further authority to fill that office by appointing a replacement for the duration of the suspension.  Today, Florida Governor Ron DeSantis suspended Hillsborough County state prosecutor Andrew Warren for failing to enforce the laws of Florida.

Specifically, Andrew Warren had announced he would not enforce laws created by the Florida legislature that were as against his personal political outlooks. Warren publicly stated he would not enforce laws restricting abortion, anti-riot laws, and any law that sought to protect children from adult predators.  “We don’t elect people in one part of the state to have veto power over what the entire state decides on these important issues,” Governor DeSantis said.

Governor Ron DeSantis made the announcement of the suspension and replacement in Tampa, with a group of law enforcement and sheriffs from across the state.

This was/is a bold move and Ron DeSantis is well supported in Florida for doing it.

TAMPA, Fla.— Today, Governor Ron DeSantis suspended State Attorney Andrew Warren of the 13th Judicial Circuit due to neglect of duty. The Governor has the authority to suspend a state officer under Article IV, Section 7 of the Constitution of the State of Florida.

The Governor has appointed Susan Lopez to serve as State Attorney for the period of suspension. She has most recently been serving as a Judge on the Hillsborough County Court. To view the order suspending Andrew Warren and appointing Susan Lopez, click here.

“State Attorneys have a duty to prosecute crimes as defined in Florida law, not to pick and choose which laws to enforce based on his personal agenda,” said Governor Ron DeSantis. “It is my duty to hold Florida’s elected officials to the highest standards for the people of Florida. I have the utmost trust that Judge Susan Lopez will lead the office through this transition and faithfully uphold the rule of law.”

“I have the utmost respect for our state laws and I understand the important role that the State Attorney plays in ensuring the safety of our community and the enforcement of our laws,” said Susan Lopez, State Attorney of the 13th Judicial Circuit. “I want to thank the Governor for placing his trust in me, and I promise that I will faithfully execute the duties of this office.”

The Governor has the authority under the Florida Constitution to suspend state officials for reasons of misfeasance, malfeasance, neglect of duty, drunkenness, incompetence, permanent inability to perform official duties, or commission of a felony. The Governor has further authority to fill that office by appointment for the duration of the suspension.

Susan Lopez was appointed by Governor DeSantis to serve as a judge on the Hillsborough County Court in 2021. She previously served as Assistant State Attorney of the 13th Judicial Circuit for more than 15 years and as Staff Attorney of the Second District Court of Appeal. She received her bachelor’s degree from Middlebury College and her law degree from Suffolk University. She is a long-time resident of Tampa and has been involved in the Hillsborough community through a variety of organizations for many years. (read more)


CLICK TO READ MORE NEWS AT THE CONSERVATIVE TREE HOUSE