Why is Biden Helping China and Hurting the US? 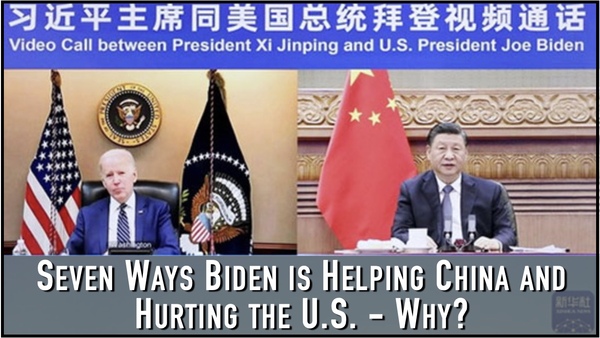 As if the video, email, text, and phographic evidence on the Hunter Biden laptop is not evidence enough to convince you that Joe Biden is compromised by the Chinese Communists then just look at his actions!

FBI Director Christopher Wray and his British MI5 counterpart conducted a rare joint public appearance in London on Wednesday to sound the alarm over the growing “serious security and economic threat” posed by China, which aims to steal U.S. intellectual property and corrupt American politics.

"Americans should be concerned because the Chinese government's attempts to steal our innovation, our intellectual property effects American jobs, we're talking about American jobs, American consumers being directly affected," said Wray. "There was a case not that long ago where an American company was essentially fleeced by a Chinese company, and that caused the company's stock value to drop by something like 85% and hundreds and hundreds of jobs lost. And so that's real impact, not just on Wall Street, but on Main Street."

Also on Wednesday, U.S. counterintelligence officials issued a bulletin to state and local officials warning of a campaign by communist China to manipulate and influence politicians with the goal of pushing Washington toward more China-friendly policies.

China "understands that U.S. state and local leaders enjoy a degree of independence from Washington and may seek to use them as proxies to advocate for national U.S. policies Beijing desires," the National Counterintelligence and Security Center said in a bulletin sent to state and local officials.

• He diverted at least a million barrels of oil from the Strategic Petroleum Reserve, according to Reuters, to Chinese state-owned gas giant Sinopec, which Hunter had invested in through his ten percent stake in Chinese private equity firm BHR.

• He disbanded the China Initiative, a national security program set up by the Trump administration to combat China’s economic espionage at universities and research institutions.

• He revoked Trump-era restrictions against TikTok, instead promising a “national security review” which has led to no action for over a year. The world’s fastest-growing social media platform, owned by Chinese company ByteDance, reportedly has repeatedly accessed US users’ private personal data.

• He has not pressed China on the origins of COVID-19.

• He reportedly is contemplating lifting further Trump tariffs against Chinese imports, for no discernible benefit to America, with economists warning that any effect on soaring inflation would be minimal and short-lived.

Devine noted: "It is astonishing that such generous concessions are even being contemplated while China has become Vladimir Putin’s top financier in the war on Ukraine, by buying discounted Russian oil and thus allowing the Kremlin to withstand Western sanctions.

"This munificence to China adds to well-founded concerns that Joe Biden is compromised by the Chinese Communist Party, given all the evidence on Hunter’s laptop about millions of dollars that flowed from China to his son and brother, Jim Biden.

"Until he comes clean about his role in his family’s influence-peddling operation in China during his vice presidency there will always be suspicions about his motives and questions about the risk to national security."