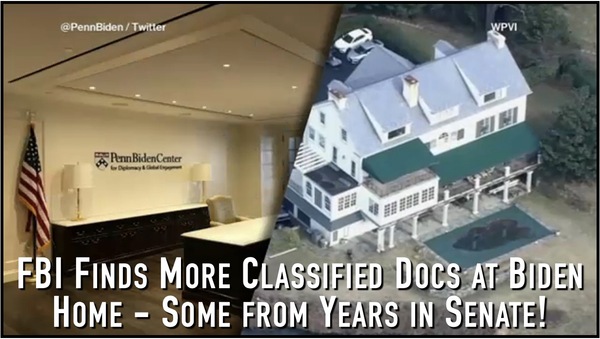 Lausch was the DOJ official running the investigation into Biden's improper retention of classified records ahead of the appointment of Special Counsel Robert Hur. Fox News has learned Lausch is still playing an integral role in the probe as Hur gets up to speed.

"At the outset of this matter, the President directed his personal attorneys to fully cooperate with the Department of Justice," Bauer said. "Accordingly, having previously identified and reported to DOJ a small number of documents with classification markings at the President’s Wilmington home, and in the interest of moving the process forward as expeditiously as possible, we offered to provide prompt access to his home to allow DOJ to conduct a search of the entire premises for potential vice-presidential records and potential classified material."

Bauer said that by agreement with the Justice Department, representatives of both Biden's personal legal team and the White House Counsel’s Office were present for the search. Neither the president nor the first lady were present during the search.

DOJ took possession of materials it deemed within the scope of its inquiry, including six items consisting of documents with classification markings and surrounding materials, some of which were from the President’s service in the Senate and some of which were from his tenure as Vice President," Bauer said. "DOJ also took for further review personally handwritten notes from the vice-presidential years."

Biden left the U.S. Senate in 2008 to serve as vice president to former President Obama.

READ MORE OF THIS STORY AT FOXNEWS.COM


As RedState reported, the slow news cycle was blown up on Saturday after it was announced that a DOJ search of Joe Biden’s home had found six more classified documents. That comes after the White House had asserted that the search had been completed

Biden’s lawyers immediately tried to get out in front of the revelation, releasing a statement claiming cooperation with the DOJ. But while the administration continues to talk about transparency, one bombshell detail from the search has left the president’s lies fully exposed. Namely, the fact that documents were found that were taken during Biden’s years in the Senate.

NEW: The DOJ searched Biden's Wilmington home yesterday and found "six items consisting of documents with classification markings." Material is from Biden's Senate years and from VP tenure, according to statement from Bob Bauer

To say that’s a massive development is an understatement. From the beginning of this entire scandal, Biden and his surrogates, including a very combative Karine Jean-Pierre, have continually asserted that this was all one big accident. As they tell it, some classified briefings and such simply got swept into boxes while Biden’s vice presidential office was being packed up. Those documents were then somehow unknowingly split up and transported to multiple locations, being moved multiple times in the process.

As little sense as that made before this latest news, it’s now been shown to be an obvious lie. Having Senate-era documents means that Biden had to have actively taken them, known about them, and kept them. There is no other way they could have ended up at his home in Wilmington, DE.

A senator would never normally have classified documents just laying around their office. Protocols are very strict on Capitol Hill, and everything is supposed to be confined to a SCIF (a technologically secure viewing facility). While one might dubiously argue that it’s not unusual for a vice president to retain classified information in their office, there is no argument that’s the case with a senator.

That leads to a ton of serious questions, not the least of which is how Biden ended up with these documents in the first place. Did he stuff them down his pants? Did he simply take the documents in full view, with none of the authorities in charge of securing them bothering to say anything? Why was he taking them? Why did he keep them at his home in Delaware for what appears to have been decades (unless they were taken at the tail-end of his US Senate career)? What did the documents contain, and did they provide any personal value to Biden?

This latest discovery by the DOJ has blown this scandal wide open. No longer can the White House dismiss concerns by saying this was all an accident. Clearly, there was intent to retain these documents, though having intent isn’t even required for it to be a crime. Further, Biden has been lying his face off when he says that he didn’t know about the documents, nor what they contain.

Monday is going to be a very hectic news day for the administration. If Karine Jean-Pierre doesn’t hold a briefing, then you know things are really bad. Stay tuned.