Attorney General Bill Barr discussed Wednesday what he sees as problems with a law passed in the early days of the internet that protects tech companies from dealing with waves of lawsuits. (Which they are using to censor conservatives online.)

There is reason to believe Section 230 of the Communications Decency Act is due for changes that allow tech companies to be held accountable for their perceived bias against conservatives, Barr said at a Department of Justice workshop addressing elements of the law.

The law indemnifies Google and others from being sued for the content users put on its platforms. (RELATED: Sen Hawley Moves Toward Forcing Big Tech To Prove Political Neutrality) 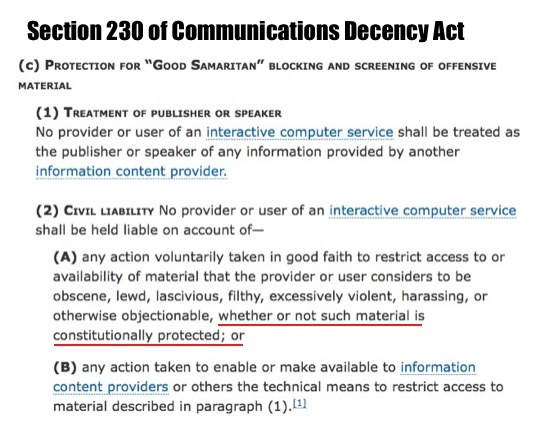 “The internet has evolved significantly since Section 230 was passed,” Barr said. “At that time, almost 25 years ago, immunity was considered vital to protecting new technology in its incipiency.”

But times are changing, according to President Donald Trump’s top law enforcer.

“Today online platforms have become essential to people’s daily lives, often serving as the primary conduit for how we receive and share information,” Barr added. “No longer are tech companies the underdog upstarts. They have become titans of U.S. industry.”

Click HERE to call/write Bill Barr and Tell Him YOU support Changing Section 230!

The workshop included talks from tech luminaries as well. Former Facebook security chief Alex Stamos and Internet Association deputy counsel Elizabeth Banker were among a handful of internet analysts who were also invited to the closed-door meeting, Axios reported Wednesday.

Some tech experts are also on board with amending the law.

Danielle Citron, a law professor at the University of Maryland, for instance, urged lawmakers at a June 13, 2019, congressional hearing to consider changing 230 to require platforms to accept moderation practices. She worries tech companies are not doing enough to ding misinformation.

Section 230 was implemented in response to Stratton Oakmont v. Prodigy, a 1995 case where the investment firm Stratton Oakmont sued Prodigy over message board posts it claimed were defamatory. A court determined that since Prodigy, an online service that folded in 2001, was liable for what was published since it acted as a type of editor of the website.

Lawmakers etched out the law in 1996 in response, ultimately overturning the court’s decision.

Many conservative groups (Like AFP, FreedomWorks, AEI, etc.) are dead-set against Barr’s analysis. (Because Google Gave them Money!)

Easley added: “Eroding the crucial protections that exist under Section 230 creates a scenario where government has the ability to police your speech and determine what you can or cannot say online.” (So we gave that ability to Google, Facebook, Twitter Instead!)