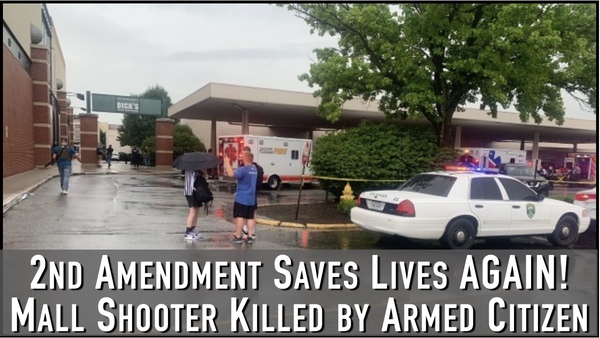 Greenwood Park Police Chief Says "A good Samaritan, that (who) was armed, observed the shooting in progress and shot the shooter” who had already killed three and injured two shoppers

Further tragedy was prevented at an Indiana mall Sunday when an armed “good Samaritan” took action against an active shooter and became “the real hero of the day.”

Around 6 p.m. at the Greenwood Park Mall in Greenwood, Indiana an unidentified suspect described only as an adult male was said to have entered the food court and opened fire on patrons. Five victims were wounded, three of them fatally, before a 22-year-old “good guy with a gun” from Bartholomew County shot the suspect, killing him before any more innocent lives were lost, according to NBC News.

Greenwood hero hit shooter from 40 yards with very first shot from his Glock!

Greenwood police chief James Ison explained that “It appears that [the suspect] had a rifle with several magazines of ammunition, entered the food court and began shooting,” but he was stopped when a “good Samaritan that was armed observed the shooting in progress and shot the shooter”

“The real hero of the day is the citizen that was lawfully carrying a firearm in that food court who was able to stop the shooter almost as soon as he began,” Ison restated to the press late Sunday night.

Panicked witnesses from within the mall described chaos having heard “probably about 20” shots fired triggering a “stampede” and suggesting how much worse the situation could have become if the as yet unidentified 22-year-old who stopped the suspect hadn’t taken action.

Mark Wright, an employee in the food court told Fox 59, “As soon as we heard shots start popping off, there was at least 25-30, my guys all hit the deck.”

“It was a scary situation, I’ve got some new kids working and they were kinda traumatized by it. I never expected this here at this mall,” he added.

“It was chaos,” Mark Tillberry described in his eyewitness account from the food court. “It was like an animal kingdom in there, we just ran out of the doors at every exit. We had people going into locked gates, putting them in the back of the stores.”

Of the other two victims injured in the shooting, one remained hospitalized but the other, a 12-year-old girl, was released having only suffered abrasions during the incident.

Click Here to Meet the "Hero" who Stopped the Mass Shooting!

Gov. Eric Holcomb (R-Ind.) who signed a constitutional carry law earlier this year that went into effect July 1 released a brief statement regarding the shooting: “I am monitoring the ongoing investigation in Greenwood, where Indiana State Police are assisting local authorities. Lives were lost today, and I’m thinking about all the victims of this horrible incident, now and in the days and weeks to come.”

Meanwhile, as corporate media attempted to downplay the actions of the 22-year-old who stepped in to stop the shooting, social media users gave credit where credit was due and disabused the narrative of the “good Samaritan” in favor of the “good guy with a gun.”