The We the People Convention wants to THANK Ohio Attorney General Dave Yost, and you should as well , for standing up for the 1964 Civil Rights Law and calling out the charade that the left has been conducting in our schools, our colleges, in large corporations, and in Government. Here's a memo, LGBTQ - XYZLMNOP, whatever, are NOT a legal protected class and never have been and never should be!

The Obama Administration "acted" as if they were a protected class and the left tries to force everyone to give them "special" rights and privileges but no federal law has ever been passed granting them protected status. It is time to have the Supreme Court make that clear so that you can tell your school district and your place of business, that homosexuals are not "special" and they should be treated just like everyone else!

But see, they don't want to be treated like everyone else, they don't want equal rights, they want superior right to you and other Americans. They want to get the job even if they are not best qualified, they want to get the promotion because of their fake "protected class status" even if they aren't the best qualified, they want to threaten to sue your business for discrimination when you need to fire them because they can't or won't do the job, they want to get admitted to college before your child because of their fake "protected class status"! They in fact want to discriminate against YOU and everyone else - not be treated equally!

There is much more real discrimination today against straight, white, christian, males than against any other group - especially LGBTQ- XYZLMNOP, whatever, and AT LEAST 90% of their "claims" of discrimination have been hoaxes. America was built on the promise of EQUAL RIGHTS FOR EVERYONE, it is time for the law to again make that clear and we trust the suit the AG Yost has joined will have the effect of re-establishing this fundamental American legal principle. 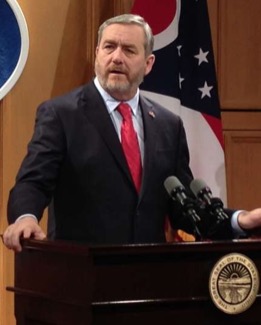 Late on Friday, Republican Attorney General Dave Yost announced he'd join a U. S. Supreme Court case on whether federal civil rights laws protect LGBTQ employees from workplace discrimination - and that Ohio would be siding with the states that think they do not.

That news came as a shock to some activists, but was well received by others. Sen. Nickie Antonio (D-Lakewood) is disappointed - to say the least.
"Our attorney general has entered into weighing in and support of a push to discriminate against a group of people. That is appalling," Antonio said.

For years, Antonio has tried to pass what she's called  the Ohio Fairness Act  - a bill to add sexual orientation and gender identity as protected classes under the state's anti-discrimination law related to employment, housing, and public accommodations. She notes one of Mike DeWine's first actions as governor was to sign  an executive order protecting LGBTQ state workers .

So Yost's decision to file a friend of the court brief in this lawsuit has left her puzzled, and  she's written him a letter about that .  "Why in the world would we put effort into taking away rights from people than working to open the circle and include everyone?" Antonio said.

But conservatives are pleased with the decision to join the lawsuit. Aaron Baer with Citizens for Community Values said the federal civil rights law at issue -  Title VII of the Civil Rights Act of 1964  - includes five protected classes that are clearly defined: sex, race, color, religion and national origin.

"Attorney General Dave Yost is standing up for what the law is, not what some political activists want it to be. When Title VII was passed, it's very clear that sex means male or female. And what you have today is you have a handful of activists trying to redefine words that Congress passed to achieve their political victories," Baer said.

In this case, Baer also said it appears activists don't believe their own argument, that sexual orientation is protected by that law, "because if they did, they wouldn't be pushing things like HR5, what they call the Equality Act, or Senate Bill 11 in Ohio that they call the Fairness Act, where they're trying to add gender identity and gender expression to the law. They don't really even believe their legal arguments."
"And so what you have is Dave Yost standing up for common sense and for what the law actually is instead of what a political agenda wants it to be," Baer said.

Some conservatives extend their concern to so-called "bathroom bills", which allow a person to use the restroom that matches their gender identity. Though that legislation  has been proposed in Ohio, it's never been given serious consideration - and indeed, no state has a law like that on their books.

Yost wasn't available for comment, but  said in a written statement  that the case "is about whether the judiciary gets to write new laws or if that should be left to elected legislators." He adds, "If the law is to be amended, Congress, not the courts, should be the one doing it."

With that in mind, the state's leading LGBTQ rights group says Yost should be speaking up in the opposite way.

"It is a backwards look for the state of Ohio to have the attorney general coming out and saying, look, LGBTQ people should not be protected from discrimination in the workplace," said Marshall Troxell, the policy coordinator for Equality Ohio. "Really, we would love for him to come out and say, LGBTQ people should be explicitly protected and urge his colleagues in the legislature to move the Ohio Fairness Act forward."

The Ohio Fairness Act has had three hearings, the last one in May. Antonio says it's the  seventh time a bill like this has been introduced  in the past 11 years.  29 states, including Ohio , have no laws with this anti-discrimination language.

Ohio is among  15 states - all Republican dominated  - joining the Trump administration in arguing that federal civil rights laws don't protect LGBTQ people from workplace discrimination.  21 mostly Democratic states and the District of Columbia  have filed briefs opposing that. The case will be argued before the U.S. Supreme Court on October 8.

If you think Donald Trump is just going to win Ohio again
and be re-elected in 2020 – you better think again!
Watch the Video then Support our Efforts to Win in 2020!