51 Illegals being Trafficked Killed by Heat in Texas 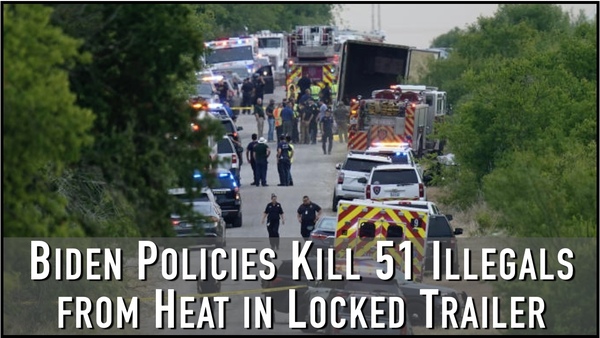 The death count was the highest ever from a smuggling attempt in the United States, according to Craig Larrabee, acting special agent in charge of Homeland Security Investigations in San Antonio.

SAN ANTONIO (AP) — Desperate families of migrants from Mexico and Central America frantically sought word of their loved ones as authorities began the grim task Tuesday of identifying 51 people who died after being abandoned in a tractor-trailer without air conditioning in the sweltering Texas heat.

It was the deadliest tragedy to claim the lives of migrants smuggled across the border from Mexico.

The driver of the truck and two other people were arrested, U.S. Rep. Henry Cuellar of Texas told The Associated Press.

He said the truck had passed through a Border Patrol checkpoint northeast of Laredo, Texas, on Interstate 35. He did not know if migrants were inside the truck when it cleared the checkpoint.

Investigators traced the truck’s registration to a residence in San Antonio and detained two men from Mexico for possession of weapons, according to criminal complaints filed by the U.S. attorney’s office. The complaints did not make any specific allegations related to the deaths.

The bodies were discovered Monday afternoon on the outskirts of San Antonio when a city worker heard a cry for help from the truck parked on a lonely back road and found the gruesome scene inside, police Chief William McManus said. Hours later, body bags lay spread on the ground.

More than a dozen people — their bodies hot to the touch — were taken to hospitals, including four children. Most of the dead were males, he said.

The death count was the highest ever from a smuggling attempt in the United States, according to Craig Larrabee, acting special agent in charge of Homeland Security Investigations in San Antonio.

“This is a horror that surpasses anything we’ve experienced before,” San Antonio Mayor Ron Nirenberg said. “And it’s sadly a preventable tragedy.”

“Exploiting vulnerable individuals for profit is shameful, as is political grandstanding around tragedy, and my administration will continue to do everything possible to stop human smugglers and traffickers from taking advantage of people who are seeking to enter the United States between ports of entry,” Biden said in a statement. (Watch: "Biden administration doing absolutely nothing to protect borders: Border Patrol Union Chief")

Authorities did not know the home countries of all of the migrants, nor how long they were abandoned on the side of the road.

By Tuesday afternoon, medical examiners had potentially identified 34 of the victims, but they were taking additional steps, such as fingerprints, to confirm the identities, said Bexar County Commissioner Rebeca Clay-Flores.

Among the dead, 27 are believed to be of Mexican origin based on documents they were carrying, according to said Rubén Minutti, Mexico consul general in San Antonio. Several survivors were in critical condition with injuries such as brain damage and internal bleeding, he said.

At least seven of the dead were from Guatemala and two from Honduras, Roberto Velasco Álvarez, head of the North America department in Mexico’s Foreign Relations Department, said on Twitter. About 30 people had reached out to the Mexican Consulate looking for loved ones, the officials said.


READ MORE OFF THIS STORY AT YAHOO NEWS.COM