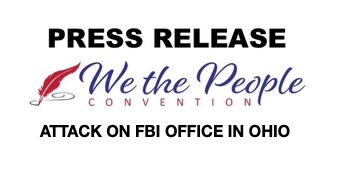 
Akron, OH: Today, Tom Zawistowski, President of the national TEA Party-affiliated We the People Convention (WTPC) and Executive Director of the Portage County Ohio TEA Party, condemned the attack on the FBI Building in Cincinnati this morning while making clear that the gunman does not represent Patriotic Conservative Americans. Despite leftist media and leftist politicians attempting to do what they always do - demonize millions of Americans for the misguided actions of a single individual.

Zawistowski said, "The actions of this misguided individual, who apparently attacked the FBI office in Cincinnati this morning, are totally inappropriate and we condemn this attack. Anyone considering similar actions should stop immediately and channel their anger in a more positive and appropriate manner. We know that emotions are high since the raid on President Trump's home and with good reason. The FBI and DOJ have proven beyond any reasonable doubt that they are totally corrupt and acting solely as a political arm of the Democrat Socialist Party. They no longer deserve and will not get the "benefit of the doubt" from the American people. No one believes ANYTHING the FBI or DOJ says but that is no reason to take a weapon and attack an FBI Office."

Zawistowski concluded, "I urge my fellow Americans to take positive action in defense of our Constitution and the Rule of Law and Equal Justice Under the Law which we all deserve - including President Trump. Call your Congressmen and Senators and demand that they stop these illegal witch hunts against conservatives; get out and do sign waves and protests demanding that the DOJ and the FBI stop acting politically and violating the law; talk with your neighbors and friends about why the illegal and illegitimate Jan 6th Committee and these attempts to eliminate Trump as a candidate are political acts, not legal actions. Then turn out and vote in November like never before!"