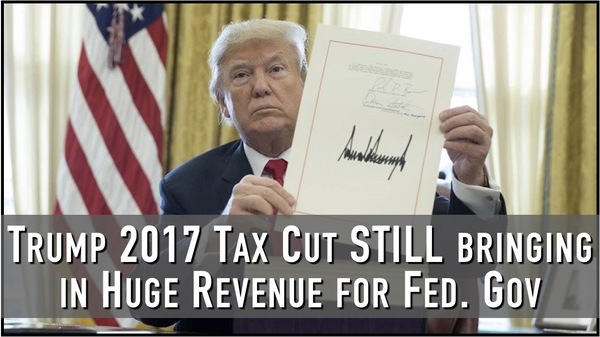 Trump's 2017 Tax Cuts and Jobs Act, which critics said would only benefit the rich, has led to a windfall into the government's coffers - and cuts in your Individual Taxes.

Tax cuts signed into law in 2017 by then-President Donald Trump have raised revenues for the federal government over the last five years, despite concerns among Democrats and other critics that the cuts would be a fiscal nightmare only benefiting the rich.

The government collected a record $4.9 trillion in revenue last year, according to the latest report from the Congressional Budget Office, a nonpartisan federal agency. That's nearly $500 billion higher than what the CBO had projected.

Federal revenues are now up about $1.5 trillion, or roughly 40%, since the Trump tax cuts went into effect at the beginning of 2018. By comparison, the cuts were initially estimated to cost the government $1 trillion, according to the Joint Committee on Taxation.

Trump signed the Republican-backed Tax Cuts and Jobs Act into law in December 2017. The legislation simplified tax filing for many families and lowered the tax rates paid by most filers. It also cut business taxes, including lowering the corporate income tax rate from 35% to 21%.

Click Here to Watch the Newest We the People Conveniton News & Opinion Podcast!

Democrats and experts from left-leaning organizations blasted the tax cuts as a ploy to benefit the rich exclusively in a move that would cause deficits to soar.

"Last time Republicans held the majority, they enacted a $2 trillion tax scam that funneled massive windfalls to the biggest corporations and wealthiest families — which increased the deficit because the GOP did not provide offsets," Rep. Nancy Pelosi (D-Calif.) said Monday in a press release, echoing a common talking point of hers.

President Biden has similarly said "all" of the tax cut benefits "went to folks at the top and corporations," a claim deemed "false" by the Washington Post's fact-checker. Biden's White House has also claimed the Trump tax cuts would add trillions to deficits over the next decade due to less revenue.

However, beyond raising revenues, the Tax Cuts and Jobs Act lowered taxes for all income groups, particularly the middle class, according to studies and government data.

In 2018, middle- and working-class Americans received tax cuts of between 11% and 88%, at least double that of wealthier taxpayers, according to an analysis of IRS income tax data by the Heartland Institute. Those earning between $500,000 and $1 million received single-digit cuts, and those reporting an AGI of between $5 million and $10 million paid just 3.5% less in taxes.

"It is the working class who have made the biggest gains under the Tax Cuts and Jobs Act," Rep. Jason Smith (R-Mo.), the new chair of the powerful House Ways and Means Committee, said in December to mark the five-year anniversary of the Trump tax cuts. "Not only did working families get to keep more of their paycheck, but their paychecks grew the fastest compared to every other income group."

Before the economic devastation caused by the COVID-19 pandemic, household incomes were rising at historic rates in the aftermath of the tax cuts.

Meanwhile, business investment increases spiked by the end of 2019 by 9.4% compared to the pre-tax cut trend, according to Tyler Goodspeed and Kevin Hassett, who served as acting chairman and chairman, respectively, of the Council of Economic Advisers in the Trump administration. For corporations, real investment was up by as much as 14.2% That finding echoes a 2021 report from the Heritage Foundation outlining major growth in wages and investment following the tax cuts.

READ MORE OF THIS ARTICLE AND MORE NEWS AT JUST THE NEWS.COM