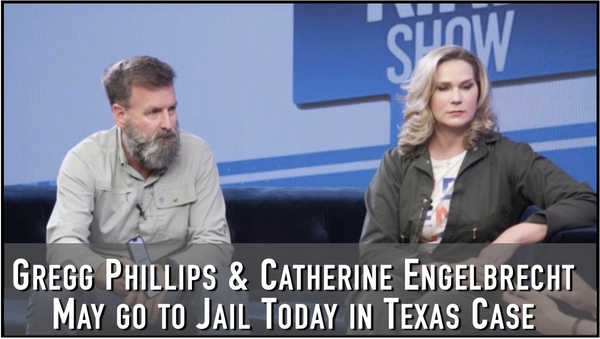 The founder and a contractor for a Houston nonprofit testified under oath last week that they were former FBI confidential informants who worked alongside law enforcement during a 16-month investigation into a software company they allege shared election poll worker data with the Chinese government.


Phone Call from Catherine Engelbrecht from Jail on November 3, 2022:


Konnech Inc. adamantly denied all allegations and filed a lawsuit against Engelbrecht, Phillips and True the Vote on Sept. 12 for defaming their company and founder, Eugene Yu.

True the Vote’s “unique brand of racism and xenophobia” against Yu, a U.S. citizen with a U.S.-based company Engelbrecht and Phillips accused of spearheading a “Red Chinese communist op run against the United States,” led to death threats against Yu and his family, according to the lawsuit.

U.S. District Judge Kenneth Hoyt granted a temporary restraining order on Sept. 12 against the defendants due to Konnech having "a substantial likelihood of success" in winning the lawsuit.

Hoyt prohibited True the Vote from accessing Konnech's computers and ordered Engelbrecht and Phillips to identify everyone who hacked the company's servers.

On the witness stand, Engelbrecht and Phillips said they were confidential informants for the FBI who were told by two special agents to take "the nuclear option" and go public about their roles in the data hack and how it contributed to Yu's arrest on Oct. 4 for the possible theft of personal identifying information of Los Angeles County election poll workers.

"When an FBI agent tells you that it's happening and suggests you take the nuclear option, it gives you something to think about," Engelbrecht testified. "They were concerned that D.C. was trying to choose their terms and make this political."

True the Vote has been scrutinized for claiming voter fraud and denying the 2020 presidential election results. The nonprofit has gained notable support from former President Donald Trump and other prominent Republicans who've donated millions of dollars.

On the Aug. 23 episode of the "Prophets and Patriots" podcast, Phillips described how he, another FBI informant True the Vote's legal team identified in an Oct. 6 court hearing as "Mike Hasson" and an unnamed FBI informant met in a hotel room in Dallas and accessed Konnech's computer servers.

“We went and met at a hotel room, towels under the doors,” Phillips said, describing a “weird” Friday night meeting with his “guys” in Dallas. “They proceeded to show me everything. They showed me the database.”

U.S. District Judge Kenneth Hoyt held Engelbrecht and Phillips in contempt of court after both refused to divulge the name of the unidentified FBI informant who they acknowledged they'd met during previous run-ins over the years.

Identifying the unnamed FBI confidential informant would put his life at risk, Engelbrecht and Phillips testified.

“Every name I give you gets doxxed and harassed,” Engelbrecht said.

Hoyt ordered Engelbrecht and Phillips to return to court on Monday and reveal the informant's name or they'll be put in jail until they do.

"You don't have to turn anything over to me confidentially, I have the highest clearance," Hoyt said. "You can not ask me to agree to keep something confidential."

Engelbrecht and Phillips also couldn't identify Hasson any further than his name, and could not recall his face, phone number or occupation. They did testify that Hasson is the one who gave the FBI the alleged stolen poll worker data.

"He's a patriot," Engelbrecht testified about Hasson's reasoning for delivering the data to the FBI. "My definition (of a patriot) is when you see things that harm this country or countrymen, and if there's a means by which you can report that appropriately and lawfully, then to do so is a patriotic act."

Phillips testified that he saw data, but did not hack Konnech's computer servers. Engelbrecht claimed in court to have never actually seen the data.

"I don't know anybody that had access to the data in any manner other than Mike (Hasson)," Engelbrecht said.

Engelbrecht, Phillips and True the Vote did take credit for telling the Los Angeles County District Attorney's Office about the data's existence.

"True the Vote is honored to have played a small role in what must have been a wide-ranging and complex investigation," the organization said in a news release on Oct. 4.

The DA's office stated publicly that True the Vote did help in their investigation into Konnech and Yu.

"Phillips' report to PID (Public Integrity Division) was the first step in a thorough independent and still ongoing investigation which ultimately led to the arrest and charging of Mr. Yu," Los Angeles County DA George Gascón's office said in a statement to Face Checker. "We initially indicated that Mr. Phillips played no role in the investigation."

Engelbrecht said the Los Angeles County DA's Office, the FBI and Hasson have copies of the data.

Phillips and Engelbrecht testified to providing information about geospatial and cell phone data to Arizona Attorney General Mark Brnovich's criminal team in May 2022. In True the Vote's film "2000 Mules," the organization claimed the data was "proof" of widespread ballot box stuffing in the 2020 Presidential Election.

To confirm the data's legitimacy, the criminal team called around to different government agencies and asked about its authenticity. This prompted the FBI to withdraw Engelbrecht and Phillips' confidential informant status, according to testimony.

Brnovich denied ever meeting with Phillips or Engelbrecht and asked for a federal investigation into True the Vote for potential violations of the Internal Revenue Code.

“Given TTV’s status as a nonprofit organization, it would appear that further review of its financials may be warranted,” Brnovich's letter said. "TTV has raised considerable sums of money alleging they had evidence of widespread voter fraud."

Engelbrecht and Phillips testified on Thursday that neither of them knew of any ongoing federal investigation into True the Vote.

Hoyt said he'd look into statements made during Engelbrecht's and Phillips' testimonies, particularly them being FBI confidential informants.

"I have ways of getting these things," he said.

READ MORE IN THE HOUSTON CHRONICLE BY CLICKING HERE