Report on Treatment of Jan 6th Prisoners You Must Share! 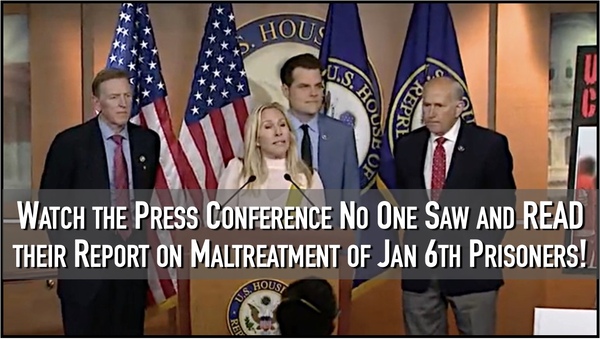 OPINION: Former criminal prosecutor and U.S. Congressman Robert L. Livingston says in Op-Ed "This atrocity must stop, and it must stop soon.”

Reps. Marjorie Taylor Greene (R-Ga.) and others in the GOP on Tuesday blasted the treatment of “political prisoners” who took part in the Jan. 6 “Stop the Steal” rally.

Currently, some who entered the Capitol building on Jan. 6 are being held in the D.C. jail in conditions that Greene described as “unusually cruel.”

Greene listed a slew of examples of this treatment.

According to Greene, Jan. 6 prisoners held in the D.C. jail have been beaten by guards and prison staff, have been unable to speak with their attorneys, have been denied haircuts or razors to shave, and have not been given proper medical treatment when they needed it, among many other examples.

Greene noted another peculiarity of the Jan. 6 defendants: Usually, Greene says, members of Congress have no problem in gaining access to jails when they make the request. In this case, however, Deputy Warden Kathleen Landerkin denied Greene and her coalition access to the facilities on several occasions before finally allowing access to the representatives.

“In fact, [Landerkin] locked us out before,” said Greene, adding, “It’s clear that there was a lot to hide.” 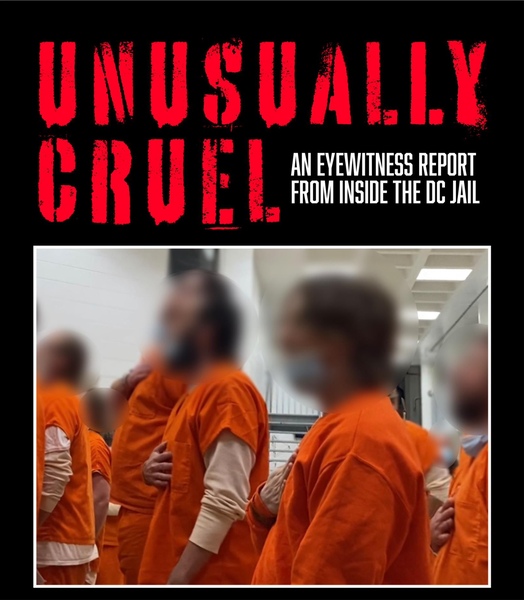 “Approximately 6 percent of [the nationwide BLM protests] were violent,” Greene said, judging that in total that equated to around 570 violent riots.

“But here’s the deal,” Greene continued, “there was only one riot that took place here at the Capitol.”

“Approximately 90 percent of BLM and Antifa rioters have been released from jail and their charges have been dropped,” Greene said, despite the 2020 riots causing “over $2 billion in damage.” The damages caused by the Capitol breach were approximately $1.5 million, Greene said by way of comparison.

“We have a two-tiered justice system in this country,” Greene said.

Greene then turned to the thrust of her speech, addressing the treatment of Jan. 6 prisoners.

“What’s happening to these people being held in custody is wrong, it’s unconstitutional, it’s a violation of their rights, and it is an abuse that I call on every member of Congress to pay attention to,” she said.

The D.C. jail, Greene said, has been known as “a despicable place” since the 1970s, and she noted a decision from a U.S. District Judge who ruled that the prevailing conditions in the jail violate the 8th Amendment ban on cruel and unusual punishment.

Jan 6th Prisoners have launced a new website called www.j6truth.org where they are posting some of their own videos of the event - Click Here to take a look!

Little has changed since this decision, Greene said, citing a 2015 report that found that the jail was “plagued by mold, vermin, and water leaks.” More recently, Greene added, the U.S. Marshall Service in 2021 found the jail to be “inhospitable.”

Despite the well-documented problems with the building, the Jan. 6 defendants have been forced to reside in the jail for months on end.

“But the January 6 defendants are being treated differently on a whole other level,” Greene said. “They have been beaten by the guards, they are called ‘white supremacists,’ they are denied religious services, haircuts, shaving, the ability to trim their fingernails.”

“Many of these people have never been charged with a crime before,” Greene said. “Some of them are veterans.” (Click Here for a full list of the 600+ Citizens who have been arrested by the Biden Regime for Jan 6th Crimes)

Aside from all these alleged violations of their liberty, Greene reported, the defendants “have been told that they have to denounce President Donald Trump” and “that their views are the views of cult members.”

In sum, Greene ruled, the Jan. 6 defendants have been treated “worse than we treat terrorists in Gitmo [Guantanamo Bay].”

Click here to Watch the Newest We the People Convention News & Opinion Podcast!

“I completely disagree [with] and am against the violence that happened on Jan. 6 at the Capitol,” Greene said, but argued “we should all, all disagree with how these people are being treated. This is completely unacceptable, and as Americans this should go beyond political boundaries.”

“We never want those in power to be able to wield their power against those they disagree with,” Greene continued, “Especially in a time where we saw political riots all over the country and the people that committed those riots … not only [have] most of them been let off their charges, but many of them were never mistreated like this.”

Democrats and others in positions of power, including failed Supreme Court Justice nominee-turned-Attorney General Merrick Garland, have said that the events that took place on Jan. 6 were an act of “insurrection,” but according to GOP speakers today, not a single Jan. 6 detainee has been charged with insurrection.
The allegations listed by Greene are only the tip of the iceberg on alleged mistreatment of those who took part in the Capitol rally. Greene and her colleagues have released a complete report titled “Unusually Cruel: An Eyewitness Report from Inside the D.C. Jail” that details other instances of mistreatment of Jan. 6 defendants (pdf here).

The media representative for the D.C. Department of Corrections did not respond immediately for a request for comment on Greene’s allegations.