Chicago Parade Shooting only the Half of It! 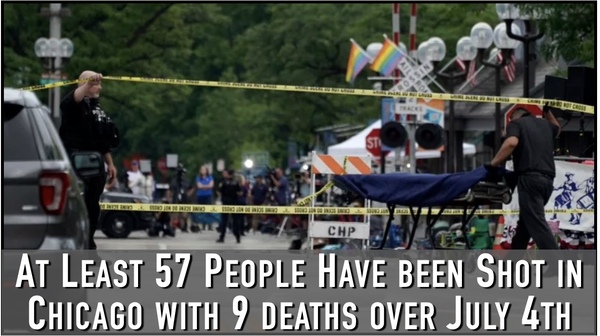 Parade Shooting was literally only HALF of the Mayhem in Democrat Controlled Chicago where the ongoing slaughter of black American's gets no headlines or coverage even though there are "mass shootings" EVERY WEEKEND - in Chicago, Black Lives DON'T MATTER!

The attack at the Highland Park Fourth of July parade was the largest and highest-profile shooting, but far from the only one, over the holiday weekend.

It was one of two mass shootings in the Chicago region alone Monday. Less than 12 hours earlier, five people were injured in a shooting on Chicago’s South Side.

The Highland Park shooting stood out in its size (at least three dozen injured), its deadliness (at least six killed) and its location, a wealthy suburb that does not often experience such violence. But it was part of a pattern: the brutal ubiquity of gun violence in a nation with more firearms than people.

As of early Monday morning, at least 57 people had been shot in Chicago over the Fourth of July weekend, nine of them fatally, according to NBC Chicago. That did not include the toll from the Highland Park shooting outside the city. More people were killed AND wounded in Chicago than in the Parade Shooting - but that's NOT A NATIONAL HEADLINE!!???

TOTAL DEMOCRAT DEATH TOLL IN ONE WEEKEND: 15 Killed and 93 Shot and Wounded!

Read about the planned "Mass Shooting" in San Antonio that was STOPPED by Police and responsible citizens!

Nationwide, the Gun Violence Archive, a tracking project that defines mass shootings as those in which at least four people are killed or injured, has counted more than 300 this year.
Beyond Highland Park and Chicago, authorities in at least a dozen other cities reported shootings over the weekend, most of them Monday.