Akron, OH: Today, Tom Zawistowski, President of the TEA Party affiliated We the People Convention (WTPC) and Executive Director of the Portage County TEA Party, announced that his organization has published its second full page ad in the Washington Times newspaper this month this time demanding that members of Congress respect the sacrifices of our Korean War and Vietnam Veterans, and all of our military who have defended our nation against communism over the past 80 years, when Deciding the Legitimate Electors on January 6, 2021 and not surrender to Communism. The purpose of the Ad is to make it clear to members of Congress, that to the American people, their actions on January 6th are about much more than a fraudulent election, they are about the very survival of our Republic and freedom around the world. 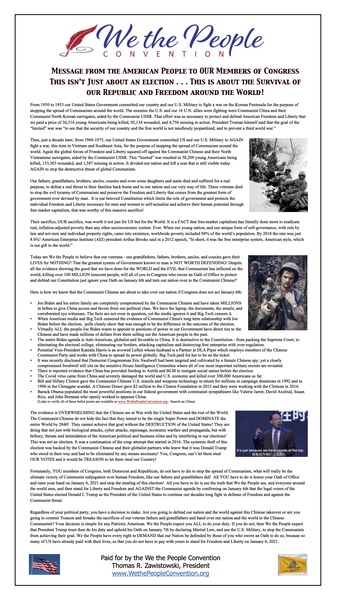 Zawistowski said, "The goal of our Ad is to bring out into the open and finally talk about the elephant in the room, that many in Washington will not acknowledge, and of which many Americans are uninformed, thanks to media and big tech censorship, and that is the existential threat from Communist China to our Republic and the World. While the debate rages about voter fraud and international interference in this election, those are just the results of a decades long effort by China and its allies in the U.S. and around the world to destroy our nation so that it can rule the world by 2040. Our goal is to make sure that members of Congress understand their duty to our Nation and that they fulfill their Oath of Office on January 6th and not surrender to Communism."

Zawistowski continued, “The Ad reminds everyone that tens of thousands of brave Americans died, and hundreds of thousands of more veterans were wounded, fighting the Communist Chinese in Korea and Vietnam. Those men and women died to protect our nation and the world from domination and enslavement by global Communism. Many more of our military continued that fight during the cold war. Despite that massive sacrifice, we are at a point today where, if our representatives do not act to protect our Republic by choosing ONLY legitimate electors on January 6th, the Communist Chinese will achieve their goal. They are doing that, not just with biological attacks, cyber attacks, espionage, economic warfare and propaganda, but with bribery, threats and intimidation of the American political and business elites and by interfering in our elections. Congress must not allow the Communist Chinese to steal our votes, let alone allow them to steal our Country!”

Zawistowski concluded, “We call upon all Americans and all veterans, particularly Vietnam vets and Korean War vets and the members of their families who paid such a high price for our freedom, to download and read our Ad and Share it and the Press Release with family and friends. Then contact their U.S. Senators and U.S. House Members before January 6, 2021 and remind them that they cannot forsake the sacrifices of our veterans and hand over our nation and the world to the Chinese Communists. Citizens can get the contact information for their members of Congress by clicking on this link.”

(Click HERE to Read an Important Article by Mark Levin that provides the legal support for the Call in our Ad for Members of Congress to do their Duty and Defend the Constitution and our Republic.)

Message from the American People to OUR Members of Congress
This isn’t just about an election . . . This is about the Survival of our Republic and Freedom around the World!
From 1950 to 1953 our United States Government committed our country and our U.S. Military to fight a war on the Korean Peninsula for the purpose of stopping the spread of Communism around the world. The enemies the U.S. and our 16 U.N. allies were fighting were Communist China and their Communist North Korean surrogates, aided by the Communist USSR. That effort was so necessary to protect and defend American Freedom and Liberty that we paid a price of 36,516 young Americans being killed, 92,134 wounded, and 4,756 missing in action. President Truman himself said that the goal of the “limited” war was “to see that the security of our country and the free world is not needlessly jeopardized; and to prevent a third world war.”

Then, just a decade later, from 1964-1975, our United States Government committed US and our U.S. Military to AGAIN fight a war, this time in Vietnam and Southeast Asia, for the purpose of stopping the spread of Communism around the world. Again the global forces of Freedom and Liberty squared off against the Communist Chinese and their North Vietnamese surrogates, aided by the Communist USSR. This “limited” war resulted in 58,209 young Americans being killed, 153,303 wounded, and 1,587 missing in action. It divided our nation and left a scar that is still visible today. AGAIN to stop the destructive threat of global Communism.

Our fathers, grandfathers, brothers, uncles, cousins and even some daughters and aunts died and suffered for a real purpose, to defeat a real threat to their families back home and to our nation and our very way of life. These veterans died to stop the evil tyranny of Communism and preserve the Freedom and Liberty that comes from the greatest form of government ever devised by man. It is our beloved Constitution which limits the role of government and protects the individual Freedom and Liberty necessary for men and women to self-actualize and achieve their human potential through free market capitalism, that was worthy of this massive sacrifice!

Their sacrifice, OUR sacrifice, was worth it not just for US but for the World. It is a FACT that free-market capitalism has literally done more to eradicate real, inflation-adjusted poverty than any other socioeconomic system. Ever. When our young nation, and our unique form of self-governance, with rule by law and not men and individual property rights, came into existence, worldwide poverty included 94% of the world’s population. By 2018 the rate was just 8.6%! American Enterprise Institute (AEI) president Arthur Brooks said in a 2012 speech, “In short, it was the free enterprise system, American style, which is our gift to the world.”

Today are We the People to believe that our veterans - our grandfathers, fathers, brothers, uncles, and cousins gave their LIVES for NOTHING? That the greatest system of Government known to man is NOT WORTH DEFENDING! Despite all the evidence showing the good that we have done for the WORLD and the EVIL that Communism has inflicted on the world, killing over 100 MILLION innocent people, will all of you in Congress, who swore an Oath of Office to protect and defend our Constitution, just ignore your Oath on January 6th and turn our nation over to the Communist Chinese?

Here is how we know that the Communist Chinese are about to take over our nation if Congress does not act January 6th:
(Links to verify all of these bullet points are available at www.WethePeopleConvention.org - Search on China)

The evidence is OVERWHELMING that the Chinese are at War with the United States and the rest of the World. The Communist Chinese do not hide the fact that they intend to be the single Super Power and DOMINATE the entire World by 2040! They cannot achieve that goal without the DESTRUCTION of the United States! They are doing that not just with biological attacks, cyber attacks, espionage, economic warfare and propaganda, but with bribery, threats and intimidation of the American political and business elites and by interfering in our elections! This was not an election. It was a continuation of the coup attempt that started in 2016. The systemic theft of this election was backed by the Communist Chinese and their globalist partners who knew that it was Donald Trump who stood in their way and had to be eliminated by any means necessary! You, Congress, can’t let them steal OUR VOTES and it would be TREASON to let them steal our Country!

Fortunately, YOU members of Congress, both Democrat and Republican, do not have to die to stop the spread of Communism, what will really be the ultimate victory of Communist subjugation over human Freedom, like our fathers and grandfathers did! All YOU have to do is honor your Oath of Office and raise your hand on January 6, 2021 and stop the stealing of this election! All you have to do is see the truth that We the People see, and everyone around the world sees, and then stand for Liberty and Freedom and AGAINST the Communist agenda by confirming on January 6th that the legal voters of the United States elected Donald J. Trump as the President of the United States to continue our fight in defense of Freedom and against the Communist threat.

Regardless of your political party, you have a decision to make. Are you going to defend our nation and the world against this Chinese takeover or are you going to commit Treason and forsake the sacrifices of our veteran fathers and grandfathers and hand over our nation and the world to the Chinese Communists? Your decision is simple for any Patriotic American. We the People expect you ALL to do your duty. If you do not, then We the People expect that President Trump must then do his duty and uphold his Oath on January 7th by declaring Martial Law, and use the U.S. Military, to stop the Communists from achieving their goal. We the People have every right to DEMAND that our Nation be defended by those of you who swore an Oath to do so, because so many of US have already paid with their lives, so that you do not have to pay with yours to stand for Freedom and Liberty on January 6, 2021.

Click here to Watch the Newest We the People Convention News & Opinion Podcast!