Why December 18th Could Be When Trump Acts to Protect Constitution

Friday is Deadline for Director of National Intelligence, John Ratcliffe, to disclose foreign interference in our election

This order will soon be in the spotlight as more evidence comes out about foreign actors (like China) infiltrating the US through dirty politicians and especially the Bidens.

President Trump on September 12, 2018 issued an Executive Order (EO) that covered foreign interference in the US election process. Breitbart reported on the EO when it came out:

“President Donald Trump on Wednesday signed an executive order that seeks to prevent and punish foreign interference in U.S. elections. The executive order, which would impose sanctions on individuals, entities, or countries, was announced by National Security Adviser John Bolton during a White House conference call.”

The Order begins by describing the actions of foreigners in our elections involved in undermining public confidence in the elections including accessing the election infrastructure or distributing propaganda: 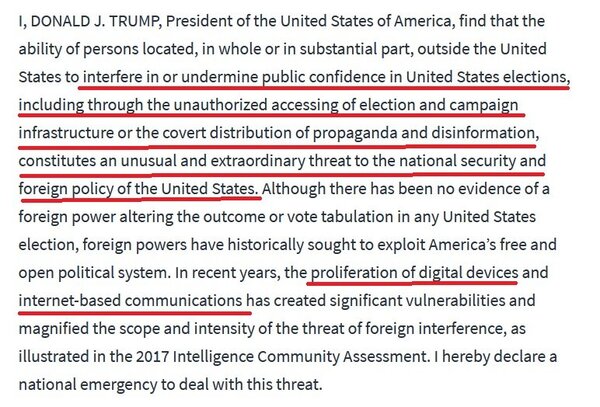 Then the Order goes on to state the the DNI (currently John Ratcliffe) is to create a report due 45 days after the election (which is December 18th) to address any Americans working with foreign entities or foreign entities messing with our elections: 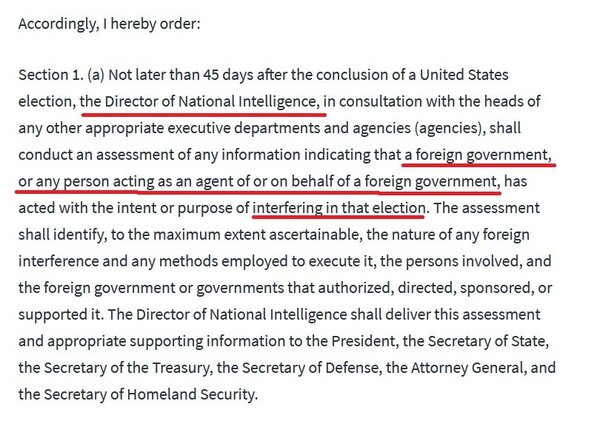 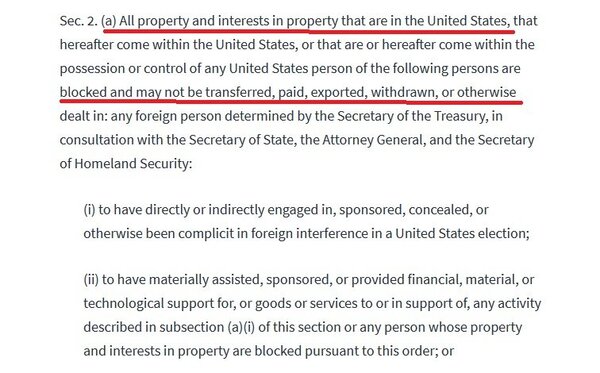 In recent days and weeks we’ve heard of numerous instances where foreigners were or may have been interfering in US affairs and perhaps even our elections:

We’ve had numerous articles about Dominion, a Canadian Company, with operations overseas and the machines they produced for US elections.

Watch Dick Morris's Plea to President Trump to have the DNI Investigate the Voter Fraud:


Yesterday we even noted that part of the hardware sold with the Dominion system, a connectivity device, allows remote access to the machines and is related to a French Company owned by a Chinese company:

We reported on a Chinese whistleblower who claims China manufactured fraudulent ballots that were sent to the US for this election:

Over the past 24 hours we’ve heard of a relationship Democrat Eric Swalwell had with the Chinese:

When Asked if Dem Rep. Swalwell Had Intimate Relationship with Chinese Communist Spy and Honeypot, His Office Said ‘No Comment – It’s Classified’

We heard a Chinese national brag about China having people at higher up places in the US:

WATCH: Video Deleted From Chinese Social Media of Professor Saying China “Has People at the Top of America’s Core Inner Circle of Power and Influence”

And now, the US Senate released documents related to Hunter Biden and the Biden family’s conflicts of interest with China and the Bidens’ criminal, financial, counterintelligence and extortion concerns with the Ukraine and China.


Click Here to Read our AD in the Washington Times calling for President Trump to TEMPORARILY Invoke LIMITED Martial Law for the SOLE PURPOSE of having the U.S. Military conduct a free and fair federal election Re-Vote!


Click Here to Watch the Newest We the People Convention News & Opinion Podcast to Lean How and Why Trump will Win this Election!


Click Here for links to the Voter Fraud Evidence in every contested state - Updated Daily!