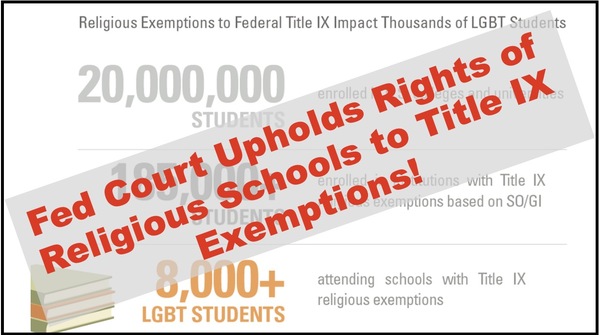 Their is no biological basis for gender identity and it is NOT protected under Civil Rights Law!

A federal court in Oregon on Thursday upheld a Title IX exception that permits religious universities to receive federal funding even if they follow religious beliefs regarding marriage, sexual identity, and gender.

A group of 40 LGBT individuals filed the 2021 lawsuit against the U.S. Department of Education to challenge an exception or loophole in Title IX that permits religious colleges to seek exemptions from the civil rights law’s restriction against sex-based discrimination.

Judge Ann Aiken from the U.S. District Court for the District of Oregon found that the loophole is “one narrow exception” to Title IX designed by Congress to safeguard institutions controlled by a religious organization and avoid interfering with their convictions that may conflict with the regulations.

“Exempting religiously controlled educational institutions from Title IX—and only to the extent that a particular application of Title IX would not be consistent with a specific tenet of the controlling religious organization—is substantially related to the government’s objective of accommodating religious exercise,” Aiken wrote in her ruling (pdf).

The LGBT group, the Religious Exemption Accountability Project, the plaintiffs in the case, argued that the exemption violated the students’ equal protection rights under the U.S. Constitution by treating them differently than other students due to their sex, sexual orientation, and gender identity.

While the group made many claims of mistreatment at religious schools, the judge found that the group failed to prove any discriminatory motivation by Congress in enacting the Title IX exemption in question.

“The Court cannot conclude that Plaintiffs’ assertion that ‘Congress enacted the religious exemption to permit discrimination based on sex, sexual orientation, and gender identity,’ is sufficient,” Aiken wrote.

Click Here to watch the Newest We the People Convention News & Opinion Podcast!

Aiken, an appointee of former President Bill Clinton, also rejected their argument that the exemption violated the First Amendment’s restriction on the establishment of religion by Congress, stating that they didn’t prove the federal government, in contrast to schools, advanced religions.

“Plaintiffs provide no developed analysis or facts to shed light on those assertions or explain how Defendants have advanced religion through their own activities and influence,” Aiken wrote.

The U.S. Department of Justice defended the exemption but agreed that it potentially violates Title IX.

The Religious Exemption Accountability Project said they were considering an appeal.

Title IX of the Education Amendments of 1972 is a federal law that prohibits discrimination on the basis of sex in any educational program or activity receiving federal financial assistance. However, religious institutions can apply for exemptions to comply with their beliefs, even if they conflict with the provisions of Title IX.

Under President Joe Biden, a Democrat, the U.S. Department of Education issued guidance in June 2021 that interpreted sex-based discrimination to include sexual orientation and gender identity, which are fuzzier concepts.

The Biden administration did this by citing the decision of the U.S. Supreme Court in the case of Bostock v. Clayton County, Georgia, which was decided in 2020. In that case, the Supreme Court held that Title VII of the Civil Rights Act of 1964, which prohibits discrimination on the basis of sex in the workplace and uses similar language to Title IX, also applies to discrimination against gay and transgender workers.

The Education Department, therefore, took the position that the reasoning of the Supreme Court in Bostock should also apply to Title IX, which covers discrimination in educational institutions that receive federal funding.

CLICK HERE TO GET MORE NEWS AT THE EPOCH TIMES