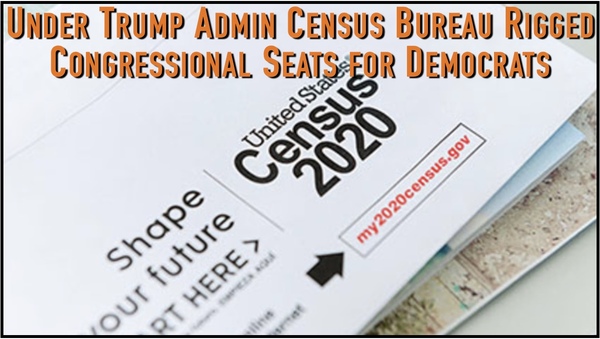 Sure, it was just an accident that the Census Bureau under Trump mis-counted the population of States so that Blue states now have Seven More Congressmen for 10 Years and Red states have Five Less for 10 Years!

As a result of those counting errors, Florida was cheated out of two additional congressional seats; Texas was denied one additional seat; Minnesota and Rhode Island each kept a representative they shouldn’t have; and Colorado was awarded a new member of the House it didn’t deserve, Hans von Spakovsky noted in an Aug. 19 analysis for The Epoch Times.

The Census Bureau admitted it overcounted the population in Democrat-dominated states Colorado, Delaware, Hawaii, Massachusetts, Minnesota, New York, and Rhode Island. The largest mistake was in Joe Biden’s home state of Delaware, which was overcounted by 5.45 percent.

The bureau said it undercounted the population in Republican-dominated Arkansas, Florida, Mississippi, Tennessee, and Texas. The largest error in the undercount was in Arkansas, where the count was off by 5.04 percent.

Florida needed only 171,500 more residents to gain another congressional seat. Yet the Census Bureau undercounted the Florida population by more than 750,000 people.

The bureau also said that Texas needed only 189,000 more people to gain another congressional seat. The survey shows that Texas was undercounted by 560,319 residents.

Minnesota would have lost a congressional seat during reapportionment if it had 26 fewer residents in the 2020 Census. Instead, the state was overcounted by 216,971 individuals.

Rhode Island would have lost a seat if the Census Bureau had counted 19,000 fewer residents. The state was overcounted by more than 55,000 individuals.

"Unfortunately, the federal statutes governing the census and apportionment provide no remedy to correct this problem," von Spakovsky wrote.

"These harmful errors also mean billions in federal funds will be misallocated. Funding for many federal programs is distributed to the states based on population. Overcounted states will now receive a larger share of federal funds than they are entitled to, at the expense of the undercounted states."


Notice how NOT ONE Red State was Over Counted and NOT ONE Blue State was Undercounted??? Everyone who had a role in the 2020 US Census needs to be fired and/or fined and/or prosecuted for perpatrating fraud!