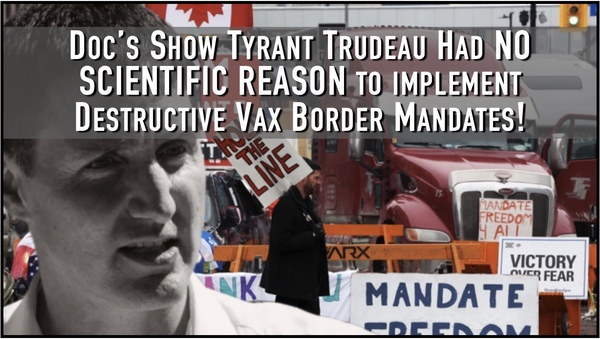 According to court documents obtained by Common Sense, the Canadian mandate that prevented people from traveling in or out of the country unless they were vaccinated was not based on any particular scientific study.

Taken with the recent revelations from Dr. Deborah Birx that health officials knew the vaccine would not prevent infection, the picture being painted of public health agencies is not pretty.

The documents, under seal by court order, have been released thanks to the efforts of two Canadians who refused the vaccine and were unable to travel to Britain to visit loved ones. The documents reveal a decision-making process regarding the travel mandate that only wacko, left-wing, woke radicals could invent.

An email exchange between the Public Health Agency of Canada and Transport Canada shows the scramble to come up with any kind of a justification to impose the travel mandate.

“To the extent that updated data exist or that there is clearer evidence of the safety benefit of vaccination on the users or other stakeholders of the transportation system, it would be helpful to assist Transport Canada supporting its measures,” McCrorie wrote.

Four days later, on October 22, McCrorie emailed Lumley-Myllari again: “Our requirements come in on October 30”—in just over a week—”so need something fairly soon.”

On October 28, Lumley-Myllari replied to McCrorie with a series of bullet points outlining the benefits, generally speaking, of the Covid vaccine. She did not address McCrorie’s question about the transportation system, noting that the Public Health Agency of Canada was updating its “Public health considerations” with regard to vaccine mandates.

It should be noted that the lack of scientific basis for imposing the mandate does not mean there isn’t evidence that vaccines offer some protection against serious disease. They do; the evidence is overwhelming that, for those in vulnerable populations, the vaccines are effective at keeping people out of hospitals and saving lives.

But Transport Canada was justifying its mandate based on the idea that vaccines would reduce the number of infections — something that obviously hasn’t happened.

The next COVID wave is upon us, and masks have become all the rage again. And people will continue to get sick, vaccine or no vaccine, mask or not.