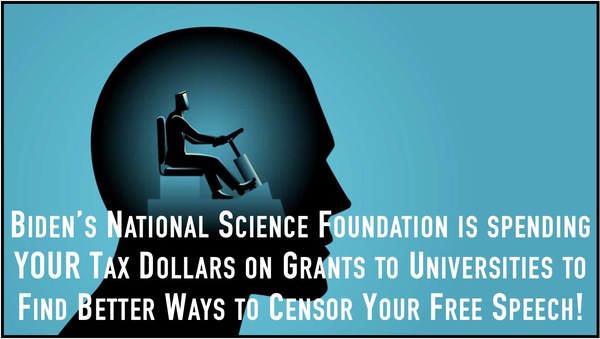 When most people think of the National Science Foundation (NSF), they think about the US government investing tax dollars in grand advancements in mathematics, aerospace and engineering.

But under the Biden administration, the fastest-growing field of NSF grant funding appears to be the science of censorship.

At Foundation for Freedom Online, we previously reported the strange fact that the exact two universities who partnered with the Department of Homeland Security (DHS) to censor the 2020 election received a $3 million joint grant from the National Science Foundation just months after the election ended.

After that revelation, we investigated every NSF grant issued in 2021 and 2022 relating to social media “misinformation” or “disinformation.” Our goal was to determine the extent to which NSF is spending US tax dollars on censoring US taxpayers.

Our findings were profoundly disturbing . . .

In just two years, those 64 government censorship grants were spread across 42 different colleges and universities. This incredible range of recipients covers every level of the country’s higher education institutions, both regionally and in terms of prestige.

It is notable that #4 on that above list is University of Washington (UW), which is one of the two institutions that DHS worked directly with — and chose as a formal partner — to censor the 2020 election.

In a separate report, we will break down a list of the most highly NSF-funded “Mis/Disinformation” topics (Covid, elections, media distrust, etc.) and the most Orwellian grant descriptions we found.

As a preview of that full-breakdown analysis, below is just one NSF grant we’ll highlight in this report, which is representative of the brazen political targeting being done by the Biden Administration with government funds under the pretext of funding “science.”

On May 1, 2022, NSF gave a $200,000 grant to George Washington University (see full grant details here) with the following grant description:

The project will also study how best to counter these populist narratives and develop more efficient and reliable communication. The focus is on four countries — Brazil, Poland, Serbia, and the US — all led by populist leaders during the pandemic and capture different types of populist responses to the pandemic… This award reflects NSF's statutory mission and has been deemed worthy of support through evaluation using the foundation's intellectual merit and broader impacts review criteria.

So this is a government grant, funded by the NSF, which explicitly takes aim at “populist politicians,” “populist communications,” and targets the former “populist leaders” of four countries — including the United States.

To ram the radical bias home, the NSF grant explicitly says the goal of the funding is “to counter these populist narratives.” That is, point blank, just the US government using US taxpayer funds to counter the social media opinions of half of the entire US electorate.

Isn’t the government supposed to work for us?

(Editors Note: It is ILLEGAL for the Government to censor the American People and violate our 1st Amendment Rights! This is ANOTHER group that MUST be Defunded by the New Republican House in the next budget bill!)

READ MORE AT THE FOUNDATION FOR FREEDOM ONLINE.COM