Akron, OH: Tom Zawistowski, President of the TEA Party affiliated We the People Convention, released a statement today calling for the immediate resignation of Ohio Republican Party State Chairman Jane Timken for her failure to support Republican State Representative Candice Keller (R-Middletown) and for not standing up for the Republican Party Platform and Republican voters. On Monday (8/5/19), Timken called for Representative Keller to resign in response to a post Keller made on Facebook commenting on the many societal causes for the Dayton shooting and other acts of violence in our nation when most Republicans in Ohio and in Keller's district agree with her opinions.

Zawistowski said, "Jane Timken is derelict in her duty as ORP Chairman and completely out of line calling for Republican Representative Candice Keller to resign. It is Timken who should resign, not Keller. Jane Timken has told me herself in the past that her job is to "defend Republicans" no matter how bad they act, when I have challenged her to sanction or not support for re-election people like John Kasich and Rob Portman who have lied to their voters and gone against the National Republican Party Platform. Now all of a sudden, Jane, the hypocrite, decides that her job isn't to defend Republicans, particularly ones like Candice Keller whose post represents what most American's believe and nearly everything that is in the Republican Party Platform that the ORP adopted as its own. Apparently the Chairman only defends certain Republicans who do not represent the views of the people in their districts, and do not really believe in Republican Party values and principles, but just say things so people will like them and vote for them."

Zawistowski continued,"What is also disturbing is how Chairman Timken, who has publicly stated that her "goal" is to help women run as Republicans, wastes no time throwing Candice Keller under the bus instead of defending her, and has done nothing to stop the vicious attacks by Republican State Central Committee member Gary Click against Melissa Atkinson who is running for State Senate. Timken also went way out of her way to undermine the efforts of nearly every woman republican candidate for state or federal office in 2018 from Mary Taylor's campaign for Governor to Christina Hagan and Melanie Leneghan's runs for Congress. I ask all REAL Republicans in Ohio to call the Ohio Republican Party Headquarters today at (614) 228-2481 and demand that Jane Timken step down as Chairman immediately. We would also ask that people email Representative Keller and tell her that she should not resign and should continue to speak out on the issues." 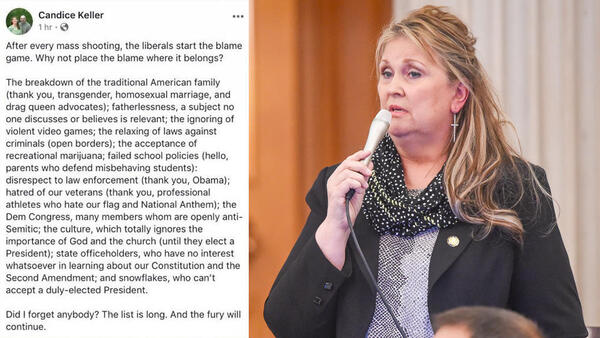 Today is Constitution Day. Why not take time to read it today . . .

Frank LaRose, Ohio Secretary of State, will discuss voter registration, absentee ballot use and how he intends to secure the vote in 2020.

AFP/KOCH Network is WRONG to Side with Big Tech

AFP/KOCH Network is WRONG to Side with Big Tech, here is why . . .

Google, Twitter, Facebook Met Government Officials To Devise Election Measures - Not sure this is good for We the People . . .

We the People Announces HUGE Updates!

The Left Can't Stop Lying about the TEA Party

If the TEA Party is such a failure, why is the left wing regressive socialist/communist media going so far out of it's way to lie about us???

2016 was like World War I, 2020 is going to be as different as World War II - the weapons, the strategies and the tactics will be completely

The We the People Convention wants to THANK Ohio Attorney General Dave Yost, and you should as well , for standing up for

Lest we forget how this all stared . . .

Take a Minute to Remember 10 Year’s Ago how this all started at the Ohio Liberty Council Rally in Columbus on August 1, 2009 Thank you to Jas