Will AG Bill Barr take Action or Not?

There are a lot of Trump supporters who are very frustrated, even angry, with the silence of Attorney General Bill Barr in the wake of last Tuesday’s attempted Democrat heist of the Presidential election. But there are indications that Barr, who understands what it takes to fight the entrenched bureaucracy that is aligned with a conspiracy that involves the media, tech companies and computer software companies supplying voting machines, is preparing to move in a dramatic, far reaching strike to expose this fraud.

Let us start with Barr’s contentious interview with Wolf Blitzer.

I have a dear friend who knows Barr very well. Rarely does he show this kind of visceral anger. I find it difficult to believe that in the ensuing two months, Barr has decided to curl up into a fetal position and allow the Republic to be eviscerated.

Pilger is a compromised deep stater. I believe his resignation was, at a minimum, encouraged by Barr.

In tandem with the DOJ moves, President Trump fired Secretary of Defense Esper. The reason, I believe is simple–Trump wanted to ensure he had someone running the DOD who was not going to meddle in domestic politics. Trump followed up by installing Kash Patel, a National Security Council official and former congressional aide as chief of staff to new acting Defense Secretary.

Trump and Barr are not rearranging deck chairs on the Titanic. They are making sure that loyal people are in place who will ensure that the orders of the President are enforced.
To understand what Barr is preparing to confront you must understand the following. I will put it simply–there was an organized conspiracy to interfere in the Presidential election and thwart the will of the voters.

First, six states stopped counting the votes on election night at approximately the same time. Five of the six are ruled by Democrat Governors. 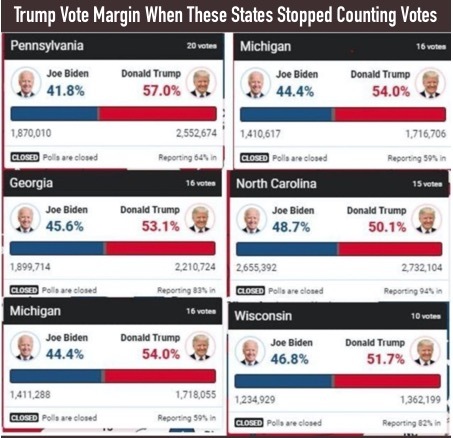 Second, millions of dollars flowed to Black Lives Matter and then were re-routed to Act Blue, which in turn deposited this money into the coffers of the Democrats. This was not legal. It is criminal for a “charitable” organization to divert those funds to political campaigns. This is a money laundering charge.

Third, hundreds of thousands of ballots suddenly appeared in the middle of the night in several of the contested states where Trump was ahead. In Michigan, for example, over 200,000 ballots for Biden appeared magically. Pennsylvania’s mail in ballots show similar problems:

More than 20,000 absentee ballots in Pennsylvania have impossible return dates and another more than 80,000 have return dates that raise questions, according to a researcher’s analysis of the state’s voter database.

Over 51,000 ballots were marked as returned just a day after they were sent out—an extraordinary speed, given U.S. Postal Service (USPS) delivery times, while nearly 35,000 were returned on the same day they were mailed out. Another more than 23,000 have a return date earlier than the sent date. More than 9,000 have no sent date.

Fourth, ballots also were filled out for voters without their knowledge and did not reflect their true choice:

A number of Pennsylvania voters were furious last week they they found that their mail-in ballots had already been filled in for Democrats when they got them. Bower said the ballots that were already filled out and arrived at homes 40 miles apart, which he says means they are not isolated incidents. “They literally stole my vote,” said Delmas Fike. Fike said when his mail-in ballot arrived, each Democrat was already selected.

Fifth, the voting machines were controlled by entities closely tied to Democrats and the far left:

Lord Mark Malloch Brown, a George Soros lieutenant, whose company Smartmatic, is intimately tied to Dominion Voting Systems who flipped votes from Trump to Biden. His machine was used in all the swing states. This would explain the MICHIGAN 200,000 vote sudden dump of Biden ballots, while WISCONSIN got a 100,000 Biden vote dump late night delivery.

Bloomberg reported in April of last year that Dominion Voting Systems hired a high-powered lobbying firm that includes a longtime aide to Pelosi. They hired Brownstein Farber Hyatt & Schreck. Nadeam Elshami, Pelosi’s former chief of staff, is one of the lobbyists on the account.

Sixth, the media and social media companies made no pretense of opposing Trump and favoring Biden. The major media polls falsely and wrongly claimed Joe Biden had an enormous lead over Donald Trump:

In his latest podcast with son and pollster Jeremy Zogby, John Zogby said that polls showing a bigger Biden lead are using a bad model, one that includes far too many Democrats.

His model follows the partisan turnout in 2016 that was about 34% Republicans and about 38% Democrats.

“We believe that is a more accurate reflection of the turnout model,” he said.

But others showing a big Biden lead over-weigh Democrats. “Now some of the polls that have come out, I find troubling,” he said, citing CNN, Fox, and YouGov. They give an average 15-point advantage to Democrats. CNN had it a 16-point lead.

Most of the polls, especially those used by Fox, CNN and MSNBC and the rest of the media, were absurdly wrong. Methodological error? No. A deliberate information operation designed to discourage Trump voters. Fortunately, the Trump crowd ignored this propaganda.

Twitter and Facebook dropped all pretense of providing a free forum for discussion. They clamped down, and continue to do so, on any one who dares challenge the social media meme that the vote was fraud free or tries to present information not favorable to Joe Biden.

White House press secretary Kayleigh McEnany on Wednesday was locked out of her personal Twitter account for sharing The Post’s bombshell cover story on Hunter Biden’s alleged hard drive and an email linking Joe Biden to his son’s job at a Ukrainian energy company. “Your account has been locked,” a message from the social media network informed McEnany, whose account has more than 1 million followers.
https://nypost.com/2020/10/14/kayleigh-mcenany-locked-out-of-twitter-for-sharing-posts-hunter-biden-story/

Twitter said that it locked President Trump’s account on Monday after the commander-in-chief violated company policies by sharing the email address of a New York Post columnist in a chirp. The social media giant confirmed to the Daily News on Tuesday that the coronavirus-stricken President’s account was locked until the post was removed. https://www.nydailynews.com/news/national/ny-president-trump-twitter-locked-ny-post-20201006-gnv5wacehfd5fantuv4hiv2rpm-story.html

And Twitter even blocked the fourth largest newspaper in the United States, the New York Post, for having the audacity to do some actual reporting:

The suppression effort came despite presidential candidate Joe Biden’s campaign merely denying that he had anything on his “official schedules” about meeting a Ukrainian energy executive in 2015 — along with zero claims that his son’s computer had been hacked. https://nypost.com/2020/10/14/facebook-twitter-block-the-post-from-posting/

If you believe these are isolated, unrelated events, you are a moron and beyond the reach of reason. Set aside your partisan views and at least have the honesty to admit that there is something rotten afoot. At a minimum, the suppression of dissenting views is an act worthy of Joseph Stalin. I am shocked to discover that such a large number of Democrat partisans have gleefully embraced a fundamental attack on the First Amendment. The very people who try to tell us that Donald Trump is a dictator are the very people promoting and supporting quashing any voice that dares to protest the media narrative. This is very dangerous territory.

So back to Bill Barr. What can he do? One option is to arrest and charge people for Conspiracy to Defraud the United States. I am talking about USC 18 section 371.

If two or more persons conspire either to commit any offense against the United States, or to defraud the United States, or any agency thereof in any manner or for any purpose, and one or more of such persons do any act to effect the object of the conspiracy, each shall be fined under this title or imprisoned not more than five years, or both.
https://uscode.house.gov/view.xhtml?req=(title:18%20USC%20section:371%20edition:prelim)%20OR%20(granuleid:USC-prelim-title18%20USC-section371)&f=treesort&edition=prelim&num=0&jumpTo=true

The evidence I have outlined above is an indicia of criminal conspiracy. It provides sufficient predicate for criminal investigations. These were not isolated acts or mere human error. The evidence is being accumulated.

I do not know what the Attorney General is going to do. But, he is not going to ignore evidence. Based on his emotional defense of the voting system when interviewed by Wolf Blitzer, I do not believe he is going to let this slide. Stay hopeful.