So why is this Twitter Document Dump so Important?

In this short clip from the December 3, 2022 We the People Convention News & Opinion Podcast, Tom Zawistowski, discusses why the Elon Musk Twitter Document Dump is so Important to YOU and to our nation. Please Watch the video and then share it with Friends and Family!

Twittergate deepens: FBI REFUSES to reveal how many social media firms it is secretly influencing - December 17

Latest installment of “Twitter Files” show Trump was being censored long before his Jan. 6th ban

READ: Deposition Reveals Complex Plot by the FBI to Influence the 2020 Election by using Social Media Companies to Censor the Truth about Biden . . .


Kyle Rittenhouse said he was hopeful that what he described as Twitter’s censorship campaign against him would be exposed just days after CEO Elon Musk released the "Twitter Files."

"Learning about the twitter files and @elonmusk releasing the truth is making me more and more curious to find out if there was hidden censoring regarding my story and case on twitter. I am hoping, one day soon, I will be able to find out and the truth will be shown to all of us," he wrote.

Rittenhouse, acquitted last year on murder charges during unrest in Wisconsin after claiming self-defense, asked Musk directly if he would "consider releasing the censoring done" on his trial in a viral post with over 18,000 likes on Twitter.

Musk ignited a firestorm on Twitter after he dropped the "Twitter files," a set of internal communications around the company's decision to censor the New York Post's story on Hunter Biden's laptop in 2020. Radio host Larry Elder reacted to the news, writing that "Democrats haven’t been this angry since Lincoln freed the slaves. #twitterfiles."

Rittenhouse was found not guilty on all charges in a trial where he received sharply negative coverage from mainstream media; he was called a "white supremacist" and numerous outlets repeated the falsehood that he illegally transported the rifle he used in the fatal shootings across state lines.

KYLE RITTENHOUSE LAUNCHING INITIATIVE TO COMBAT 'LIES' FROM POWERFUL MEDIA OUTLETS, NAMES THOSE HE MAY SUE

Commentator Ian Miles Cheong responded to Rittenhouse’s post, revealing that "I was briefly suspended for saying I believed in your innocence."

Rittenhouse started the "Media Accountability Project" to "hold the media accountable" and take them to court for the "lies" they perpetuate against Americans, in his view. Rittenhouse told Fox News host Tucker Carlson in an interview that he wanted to fight back against the media so that no one else has to "go through what I went through."

Former Covington High School student Nicholas Sandmann was similarly tarred and feathered by the media in 2019 after a clip went viral of him smiling as a Native American played a drum close to his face. 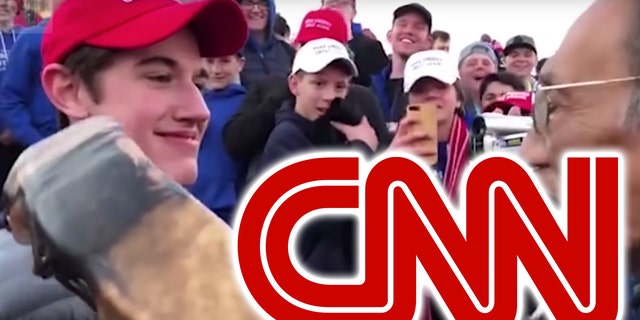 Sandmann also asked Musk if he had "any hidden Twitter files" relating to death threats made against him and his school. He shared multiple screenshots of threats, including one picture of "MAGA kids" being shoved,  into a "woodchipper."

"As I’m watching this all play out, I’m wondering if @elonmusk has any hidden twitter files relating to what went on here. Let’s be clear: under the watch of @vijaya they allowed these illegal threats when I was 16 years old."

READ MORE OF THIS STORY ON FOXNEWS.COM